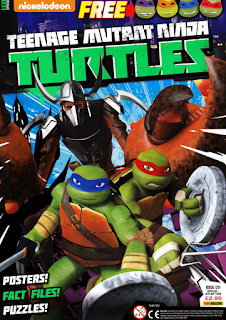 It's July and New York City is experiencing a freak Summer blizzard.  Using a tracking device built by Donatello, the Turtles head to the rooftops to search for answers.  They eventually find the Kraang operating a weather control device out of an old warehouse and swoop in through the skylight to stop them. 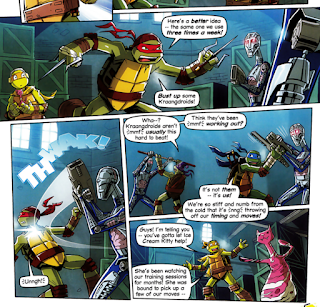 Unfortunately, being cold blooded, the freezing temperatures have hit the Turtles extra hard, slowing them down to the point where they can't out-maneuver the Kraangdroids.  Luckily, Michelangelo packed a secret weapon: Ice Cream Kitty!  Raphael and Leonardo are incredulous as to Kitty's effectiveness, but she soon proves her worth by sliming all the Kraangdroids with her ice cream. 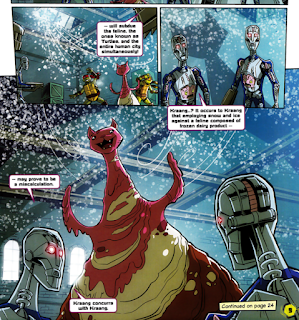 Ice Cream Kitty shrinks as she melts, but the heat revitalizes the Turtles and they finish off the last of the Kraangdroids.  Donatello and Raphael then destroy the weather controller, but Michelangelo is concerned that Ice Cream Kitty has melted too much and wants to get her home ASAP.

Later, down in the lair, April arrives with the last of the frozen pizzas from the grocery store.  Mikey piles the pizzas onto Ice Cream Kitty; the cold restoring her to her proper temperature and the calcium from the cheese revitalizing her dairy elements.  Donnie compliments Mikey for coming up with a good idea, but Mikey insists that there's no problem pizza can't solve (as he tries to bite into a frozen pie).

*Raphael mentions that Ice Cream Kitty has saved them before.  She did so most recently in TMNT Magazine (Panini) #21.

The Kraang employing stupid doomsday schemes which the Turtles have to thwart feels like a throwback to the earliest days of Panini's TMNT Magazine, where it was just issue after issue of precisely that.  While I'm still a little burned out on such stories, it was a bit of a reminder of how much simpler the roster and storylines for this universe used to be.  The Kraang operating a weather control machine may or may not be a reference to Krang's weather control device from the Fred Wolf cartoon, but then, "weather control device" is one of the most cliched weapons of any villain organization.  So it could as easily be a coincidence.

Although we're still in the season two era with these comics, and about four issues away from TMNT Magazine transitioning into the season three storyline, Mikey makes a reference to Crognar, which was the season three "show within a show".

...I dunno.  It's not even an interesting note, I'm just trying to fill this space up.

Anyhow, I'll try and plow through the last of these season two era TMNT Magazine comics.  Hopefully the season three era comics will be a bit more interesting.  Or at least have better artists.