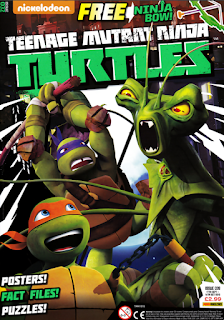 In Central Park, the Turtles are battling it out with Snakeweed.  The mutant plant thinks he has the advantage, as the Turtles can't hit him with lightning on a clear night and there are no power sources anywhere close by.  Donatello proves him wrong, breaking out his new Sonic Zapper device which creates a powerful soundwave that causes him to explode.  Donnie assures his brothers that Snakeweed's still alive, but it'll take him a while to grow a new body. 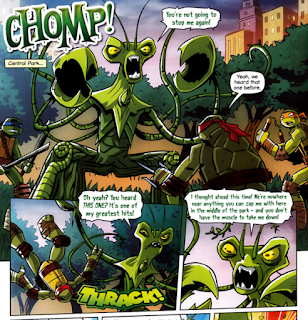 As they leave, a trio of male mosquitoes (which feed on plants) take a drink from one of Snakeweed's severed limbs.  The mutagen-laced chlorophyll turns them into color-coordinated mosquito-plant-dog-things.  The mosquitoes want more food and follow the trail of Snakeweed's scent, left behind by Donnie when he took a fragment of the mutant back to the lair to study. 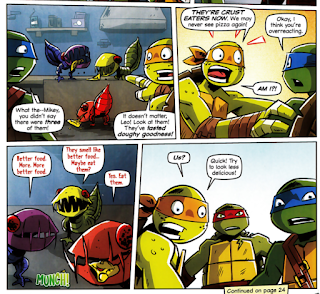 Down in the lair, Raphael and Leonardo are busy playing the new Battle Gnomes video game while Michelangelo feasts on pizza.  The mosquitoes steal the fragment of Snakeweed from Donnie's lab, but they're still hungry.  They find Mikey in the kitchen and he gives them a slice of pizza.  Liking it, the mosquitoes become ravenous, forcing Mikey to call for help. 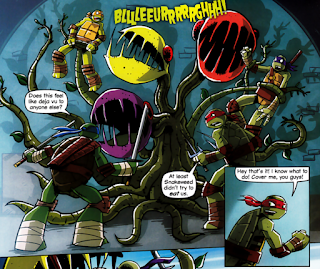 Leo and Raph come to his aid, but now the mosquitoes are ready to move on to meat.  Donnie manages to trap them in a trash can until he can figure out how to calm them down.  Mikey gets an idea and feeds the mosquitoes plant food, hoping to satiate their appetites.  The chemicals in the plant food react with the mutagen and the mosquitoes combine into a giant three-headed man-eating plant monster.  Raph breaks out the Sonic Zapper and blows the mosquito-plant to pieces, but the soundwaves also shatter every piece of glass in the lair... including the TV he was going to play video games on.

*Snakeweed mentions the time the Turtles zapped him with lightning in TMNT Magazine (Panini) #2.

Man, I have really fallen behind on reviewing these Panini comics.  I think they're almost up to 60 issues now and here I am, still stuck in the early 30s.  But they're just so boring...

This installment didn't have a lot going for it, but at least it seemed to realize how lame a villain Snakeweed is.  He's discarded by the first page and a new threat is introduced to carry the plot.  It's still a bunch of killer planet monsters, which is a lateral move from Snakeweed, but I guess it was a breath of fresh air.

I'll give Burnham credit in that his script's pacing fit a lot in for what's ultimately a short story (even at double-length, this comic is only 12 pages).  It's very economical and the plot MOVES.  It's just that it moves in a predictable pattern and there are no twists or turns.  I mean, jeez, they kill the mosquito mutants at the end by remembering "Hey, don't we have a weapon designed to kill plant mutants that we just used a few hours ago to kill another plant mutant?"

Perhaps now you can see why I'm struggling to review these things.