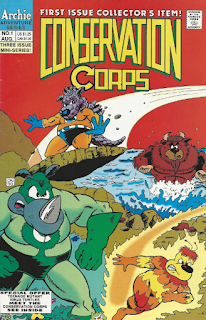 In a raft somewhere out in the Pacific Ocean, the Conservation Corps (Water Buffalo, Greenhorn, Firefly and Stonehedgehog) recount their adventure with the Teenage Mutant Ninja Turtles and redouble their efforts to find their missing fifth member.  Suddenly, Firefly gets a telepathic message that leads them back to Benevolence’s crashed spaceship.  Investigating, they push all five buttons on a panel and suddenly find themselves trapped in pods which whisk them off into space. 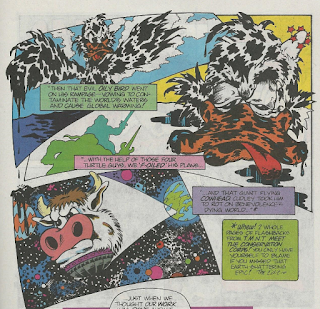 Along the way, they’re treated to a recording of the late Benevolence.  He explains that his homeworld, Danopaulus, was once a lush and vibrant place not unlike Earth.  However, they built their entire global economy around mining and abusing resources.  Now, they’ve destroyed their own ecology and their planet teeters on the brink of doom.  He asks that the Conservation Corps find a way to save Danopaulus.

Arriving on Danopaulus, a hooded native greets them and leads them to a city.  He gives Stonehedgehog a tracking device and tells him to follow it for more answers.  The Corps follows it and they’re eventually led to… Benevolence?  The not-dead alien tells them that when Cudley the Cowlick dropped him and Oily Bird off on Danopaulus, Cy-Droids managed to get him to a hydro-healing cocoon in time to save his life (whilst also taking Oily someplace unknown).

He goes on to say that he attempted to rally the Congress of Science with his findings on their planet’s pollution and his strategy to save the environment.  However, corrupt politicians had him booted from the Congress and forced him to go underground, collecting a group of radicals to form an eco-task force (uuggghhh). 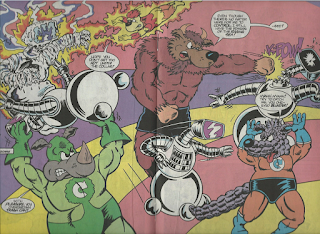 As the Corps and Benevolence attempt to rejoin the underground movement, they’re attacked by Cy-Droids.  A quick two-page spread makes short work of the robots and Benevolence soon meets with his colleagues.  Unfortunately, they cannot proceed with his plans until the Conservation Corps find their fifth member.  Using a matter transporter tube, Water Buffalo is sent back to Earth to scour the Pacific Ocean for their missing teammate, using a homing device of Benevolence’s design to locate the crashed enviro-pod. 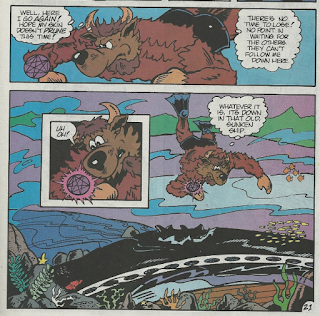 Stonehedgehog is about to follow when suddenly their secret headquarters is invaded by a member of the Congress of Science and his Cy-Droids.

*This issue also included 3 bonus pin-ups: One by Mike Kazaleh, one by Scott Shaw! and a third by Nakrosis called “Let’s Do Lunch with the Conservation Corps!” (which included a guide on how to recycle your mealtime trash).

Do you think I WANTED to review this miniseries?  Of course I didn’t.  But a week or two ago I found all three issues in a 50cent box at a local shop and I pretty much couldn’t put it off anymore.  I ran out of excuses and now we’ve all got to put up with this shit.

Personally, I’m not even sure if this counts as a TMNT comic.  I always viewed the Conservation Corps more as crossover characters like Usagi Yojimbo, not spin-off characters like the Mighty Mutanimals.  But I guess that they technically DID originate from a comic book with the Ninja Turtles in it, and the Turtles DO make brief silhouetted cameos in the flashback segment of this first issue, so whatever.  It’s just three issues.  Let’s get this over with.

None of the characters ever seem like they’re making eye contact.  Yes, they’re certainly looking AT each other, or they're trying to, but the perspective and the line of sight is so far off I’m rarely sure that the characters even exist on the same plane of reality as one another.  I think the reason is that no one ever faces what they’re looking at.  Their head is tilted to the left and their eyes are straining to the right.

The story is also somewhat confounding, at least when read in conjunction with the TMNT crossover special that introduced everyone.  So in that story, Benevolence came to Earth because he knew Danopaulus was a lost cause and didn’t want Earth to suffer the same fate.  In fact, at the end of that issue, he has Cudley bring Oily Bird to Danopaulus because he feels that even if the monster did get loose and go on a rampage, it couldn’t do any further damage because the planet was fucked, anyway.

But now we learn that his actual motive was to use the Conservation Corps to save his homeworld?  So I guess it wasn’t as lost a cause as he said.  So why’d he bring Oily Bird back with him, then?  Also, having him live sort of sucks the suspense out of his noble sacrifice from the crossover special, but was anybody REALLY invested in the drama of this narrative, anyway?  Of course not.

Much of the plot is derivative of Superman’s origin, either knowingly or not, and you aren’t going to get anything original out of this tale.  Instead, Nakrosis and Castiglia try to dress it up with some Fourth Wall gags that are, actually, kinda clever.  Some of the time.  The opening splash page where Greenhorn accidentally reads the title backward was worth a smirk. 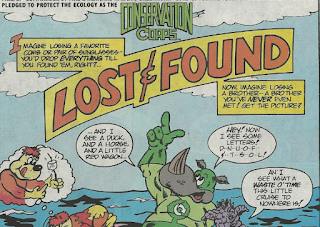 Look, these aren’t good comics and you don’t need me to tell you that.  And they barely even qualify as TMNT comics, but I suppose I’ve reviewed books with even more tenuous connections.

Grade: F (as in, “For crying out loud, you'd think a creator with a name that sounds like "Necrosis" would be able to come up with something cooler than this shit:”) 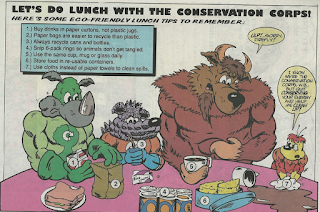