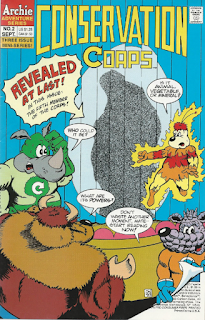 “A Fish Out of Water”

On the ocean floor of the Pacific, Water Buffalo traces the enviro-pod’s signal to a sunken ship.  He creates a whirlpool which shatters the hull of the vessel, freeing the fifth member of the Conservation Corps: An anthropomorphic female shark!  She says that she was swimming a couple days ago when she thought the enviro-pod was food.  She followed it into the ship and it transformed her into what she is now.  However, the ship also collapsed on top of her, trapping her inside.  Happy to have completed his objective, Water Buffalo teleports himself and the shark back to Danopaulus. 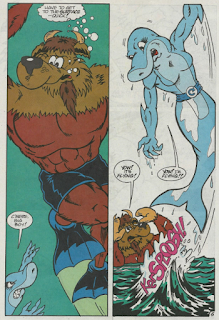 On Danopaulus, the corrupt Congressman and his Cy-Droids have taken the Corps and Benevolence hostage, binding them in ropes.  The Congressman explains that he plans to use a transmitting device called Virtual Ecology to send subliminal messages to all the people of Danopaulus.  Those messages will make them think that all is well and that they’re living in a lush, green world.  And so, it will be even easier for him and the rest of the corrupt Congress of Science to continue mining, dumping, cutting and burning every last resource on the planet.  He then opens several tanks of carbon monoxide to suffocate the Corps and leaves with his Cy-Droids.

Water Buffalo and the shark arrive on Danopaulus and the shark manages to scare some answers out of a local, who tells them how to find the other Corps members.  They arrive at the carbon monoxide-filled room in the nick of time and the shark discovers she has powers over wind and air, blowing the poisonous gas out of the building.  Seeing these powers, she dubs herself Sky Shark.

The Corps and Benevolence reach the assembled Congress, but not in time to stop the Congressman from activating his Virtual Ecology transmitters.  The five transmitters broadcast the subliminal message across the world, making it appear to be healthy again.  But the evil politicians haven’t won, as the rest of Benevolence’s underground eco-resistance movement arrives, and they’ve brought thousands of new recruits. 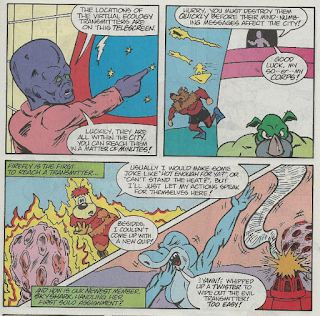 As the Congress is taken into custody, the Corps breaks up so that each can take down one of the five transmitters.  Firefly melts one, Sky Shark destroys one with a tornado, Water Buffalo punches on, Stonehedgehog crushes one with a rock, and Green Horn turns a single blade of grass into a vine that strangles the last transmitter. 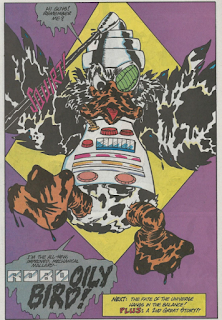 They return to celebrate their victory, but the Congressman isn’t finished yet.  He says that he has one more ace up his sleeve and introduces his ultimate weapon: Robo Oily Bird.

*This issue also included pin-ups of the Conservation Corps by Kevin Eastman, Joe Staton, Dan Nakrosis (more a chart on household recycling tips) and one by someone with a signature I can’t really read but I think it says “Jorge Darn” (?).

Green Horn is fucking useless in this miniseries.  His powers revolve around controlling plant life, but the mini takes place on a world devoid of plant life, so what’s he good for?  An entire page is spent on him struggling to control a blade of grass.

So I guess now we know which one is the Ma-Ti of the group.

I’m sure we all cobbled together the allegory of this issue’s drama for ourselves.  The media makes us think everything is ok, but in reality the whole world is going to shit and we just don’t know it.  It seems like maybe Castiglia and Nakrosis got it the other way around; more often the media exaggerates a problem to get people riled up and paranoid.  It serves their ratings, but the reality is that it was never as sweeping a danger as they made it out to be.  Or do you really think it’s just a coincidence that every year, like clockwork, we undergo a media scare involving some trendy new disease (bird flu, swine flu, sars, ebola, zika, and so on)?

The fifth member of the Corps is revealed and it’s a shark.  Well, okay.  I do kind of like the counterintuitive natures of the animal/power pairings.  Water Buffalo is a land mammal and he has the aquatic powers, while Sky Shark is a fish and she has the air-related abilities.  Go figure.  It's the closest this comic gets to being creative so I'll take it.

Also, have you noticed that the evil Congressman who is thus far the primary antagonist of the whole miniseries has yet to receive a name?  And no, “The Congressman” is not his super villain name, I’ve just been capitalizing the “C” for ease of summary skimming.  But yeah, the creators forgot to name their own bad guy.  I guess that’s not the most incompetent thing about this comic.

The pin-up gallery in the back fails to credit the contributors and I hate it when pin-up galleries do that.  Archie was notoriously bad about this (many of their TMNT Adventures issues had galleries without credits) and half the time I can’t read the fucking signatures.  But at least I recognized Kevin Eastman’s pin-up.  It would be difficult not to.

Grade: F (as in, “From the vantage point of 23 years in the future, I wonder if Eastman regrets contributing to this comic?”) 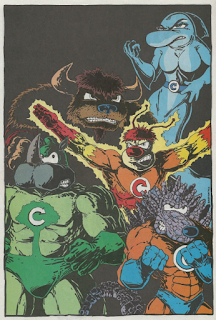