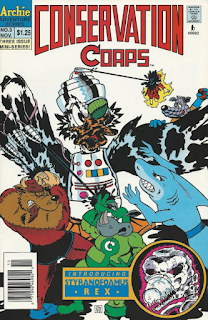 The Conservation Corps counterattack against Robo-Oily Bird and also I just got that “Danopaulus” is a portmanteau of the creators’ first names.  Firefly attempts to ignite the duck’s fuel, but the fowl just swats him away.  Stonehedgehog tries next, realizing that petroleum is a mineral and he should have the power to control his foe.  Robo-Oily Bird makes the ground too slippery for Stonehedgehog to get any traction and he goes careening off into the distance.  With no water or plant life around, Water Buffalo and Green Horn resort to fisticuffs, but cannot put a dent in Robo-Oily Bird’s armor. 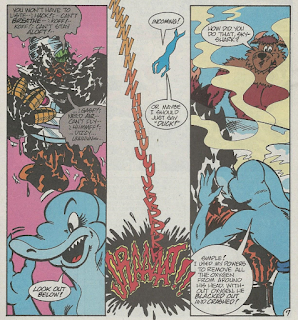 Finally, Sky Shark steps up to the plate.  She tells the “inferior gender” to stand aside and boasts that she can take their enemy down all by herself.  Robo-Oily Bird chases her into the sky, but suddenly finds himself short of breath and plummets back down to the surface of Danopaulus.  Sky Shark brags that she simply sucked all the oxygen away in a vacuum around Oily Bird, asphyxiating him.

With Robo-Oily Bird unconscious, Benevolence has the corrupt Congressman taken away by the authorities.  The Corps asks who he is and Benevolence reveals that the Congressman’s name is Malevolence and that they’re brothers.  As for Robo-Oily Bird, Benevolence says that he’ll be sent to the planet’s polar region to be held in suspended animation until he can find a way to return the mutated water fowl back to normal.

The Corps offers to stay and help Danopualus with its reconstruction, but Benevolence insists that they have done enough.  Instead, he and his followers will find a way to balance ecology and economy.  The Conservation Corps, however, must return to Earth and use their powers to keep the planet from becoming as fargone as Danopaulus.  As the Corps leaves in the Pod-Ship, Benevolence promises that he will continue to mentor them from a distance. 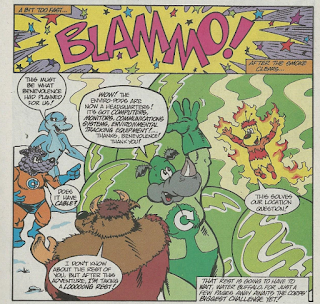 When they return to Earth, the Pod-Ship lands in the South Pole and expands into a new high tech headquarters for the Corps… albeit one not drawn on-panel because that would be too much work.

In Kearny, New Jersey, a local boy named Frankie introduces himself and begins telling how he met the Conservation Corps…

A small meteor crashes into a dump on the edge of Kearny.  The meteorite pierces through numerous layers of debris until at last lodging itself in the fossilized skull of a tyrannosaurus rex.  The radiation from the meteorite brings the t-rex back to life, but it is missing parts of its skeleton.  Using its new radioactive powers, it collects all the non-biodegradable material it can find, namely styrofoam, and reassembles itself, becoming Styranofoamus Rex. 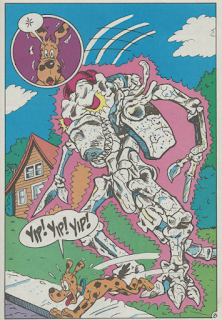 The monster goes on a rampage throughout Kearny and news quickly spreads across the country.  The President considers nuking New Jersey, Steven Spielberg tries to sue because he thinks he owns the trademark on dinosaurs, an opportunistic preacher in the Bible Belt attempts to sell a book on the End Times to the panicking public, Dan Nakrosis sleeps through the whole thing, and finally, in the South Pole…

At Conservation Corps HQ, the heroes get wind of the rampage and take their Pod-Ship to Kearny.  Firefly offers to melt Styranofoamus, but Water Buffalo stops him.  Melting styrofoam and plastics only creates poisonous gases which could harm the ozone layer!  Green Horn has a plan, and setting the Pod-Ship down by the river, begins to distract Styranofoamus…

Suddenly, Frankie gets called to lunch by his mother.  Hurrying away, he promises to conclude the tale very soon.

*This story is continued from Conservation Corps #2.  The second story ends on a cliffhanger with a note asking fans to write in and request more Conservation Corps comics from Archie to see what happens next.  No further comics were ever published, so I guess we’ll never know what became of Styranofoamus Rex.

The people have spoken!  And what did they say?  “You can keep the second half of that styrofoam dinosaur story, thanks.”

Yeah, isn’t that a little embarrassing?  Nakrosis and Castiglia deliberately left their last issue off on a cliffhanger, encouraging their fanbase to start a letter writing campaign for more Conservation Corps comics.  Except they neglected to realize that they didn’t HAVE a fanbase to begin with.  It seems they were hoisted by their own petards.

I’ve never gotten to type that colloquialism before.  Let me have this.

“Oil Fowled Up!” is a lackluster conclusion to the ongoing story of the miniseries; breaking this finale up into two segments ultimately shortchanged the A-plot.  Robo-Oily Bird winds up jobbing to Sky Shark to make the new character look good; something of a cliché I think we’re all a little tired of.

We get our one and only glimpse of Sky Shark’s personality during this fight, as she refers to her male comrades as “the inferior gender” and then proceeds to parry Robo-Oily Bird’s randomly sexist/chauvinistic/misogynistic insults.  So it looks like she was going to be the stock “girl power” character, had this series continued.  Oh, what wonders we missed out on.  Ah well, at least they didn’t try to awkwardly sexualize her or anyth- 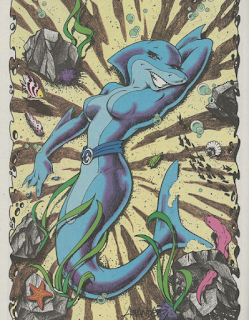 Sigh.  The sad reality is that thanks to the law of averages, someone somewhere has jacked off to this.  Let that thought keep you warm at night.

Also, the unnamed Congressman villain FINALLY gets an identity in this very last issue.  Also, he’s Benevolence’s brother.  It’s, like, Shakespearian symmetry or something.  Well, it’s definitely something, anyway.

“Fossils ‘n Foam” introduces, and I’m loathe to admit it, a pretty cool monster in Styranofoamus Rex.  A radioactive t-rex made out of styrofoam that no one can blow up because then it would destroy the ozone layer?  That’s just crazy enough to not be entirely terrible!

The series ends on a cliffhanger, as mentioned, so we’ll never know how the Corps defeated him.  Or IF they defeated him.  Since young Frankie is still breathing, I’m going to assume the Corps was victorious, but there’s always the chance they sacrificed themselves in battle.  I’ve got my fingers crossed.

So yeah, needless to say, this entire miniseries is awful.  The art is amateurish, the storytelling is formulaic, the characters have no personality, the messages are preachy… It’s just totally fuckin’ bad.

It’s a relic of a time when EVERY cartoon, comic and toyline was getting in on the environmentalism movement (G.I. Joe even had the Eco Force.  Yes, the “Eco Force”) and maybe it’ll take you back to those days in the early ‘90s when this shit was so common.  But expect it to feel less like nostalgia and more like a bad memory.

Grade: F (as in, “Fred Hembeck produced the only solid laugh I got out of this whole miniseries”.) 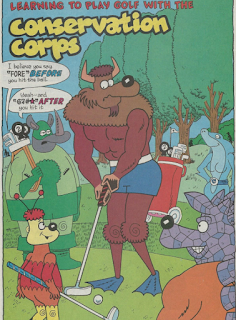