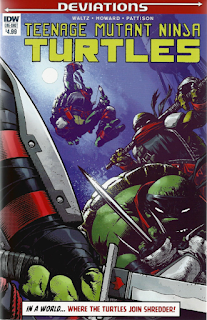 Recently: The Shredder lures the Turtles out by kidnapping Casey Jones.  He stabs and kills Casey before their eyes, and in their blind rage, all four Turtles are easily captured.  Kitsune then uses her powers to brainwash the Turtles into servitude in the Foot Clan and the Shredder sends them to hunt down Splinter… 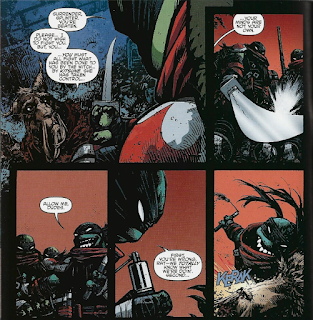 After interrogating Old Hob, the Turtles learn where Splinter is hiding.  Hob barters his freedom in exchange for the information, as the Turtles don’t consider him a threat and are willing to let him go.  As they chase Splinter down, he begs his sons to remember who they really are, but they feel nothing and beat him to a pulp.  Leonardo stops his brothers from killing Splinter, as the Shredder wants him alive.

At Foot HQ, the Turtles bring Splinter before Shredder.  Shredder wants Splinter to live long enough to see his sons help the Foot take over New York City.  Kitsune thinks letting Splinter live any longer is a mistake, but Shredder silences her.  Outside the throne room, Karai pouts over being passed over for Chunin in favor of Leonardo.  She confides in Alopex, having heard about her attempted rebellion against the Shredder in Alaska, and the two begin scheming.

At the Skara Brae, Arnold Jones mourns the death of his son.  Sick of drinking away his sorrows, he tells Brooklyn, Ferguson and Kid Kennedy to get the Purple Dragons back together.  He intends to be Hun one final time and avenge his son’s death.

Later, the Turtles reconvene at Foot HQ.  Leonardo has finished off the Savate, Michelangelo has killed the Ghost Boys, Raphael has slaughtered Lupo and his mob, and Donatello has executed the Street Phantoms before they could even finish establishing themselves.  With power now consolidated in the Foot Clan, the Shredder raises his sword and prepares to kill Splinter. 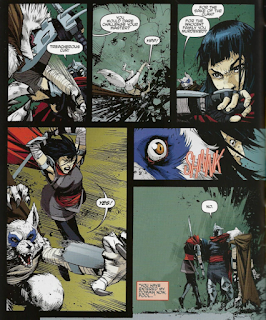 Suddenly, a wall explodes and in marches Old Hob and Slash.  They had coordinated Splinter’s capture and rescue all in the hopes of getting inside Foot HQ where their enemies were most vulnerable.  At the same time, Hun and the Purple Dragons invade, crying for revenge in Casey’s name.  And lastly, Karai and Alopex play their hand, attacking Shredder over the injustices he has dealt them.

While the Turtles fight Hob and Slash, the Dragons fight the Foot Soldiers, and Alopex and Karai fight the Shredder, Splinter challenges Kitsune to a duel on the Astral Plane.  In the madness, Shredder kills Karai and Alopex, the Foot Soldiers and the Dragons wipe each other out and Raphael murders Hob.  On the Astral Plane, Splinter is outmatched until his power is joined by the spirit of Tang Shen.  Revitalized, Splinter kills Kitsune and she drops dead in the real world. 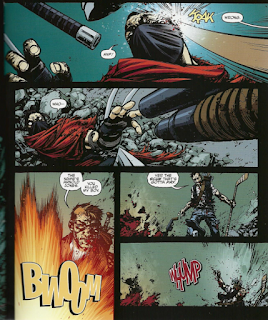 With Kitsune dead, the Turtles regain their senses and Slash, recognizing that they’re good again, stops fighting them.  Shredder, mourning the death of Kitsune, attempts to decapitate the defenseless Splinter.  However, Hun gets the drop on him and blows his head off with a shotgun (before dying from his own injuries). 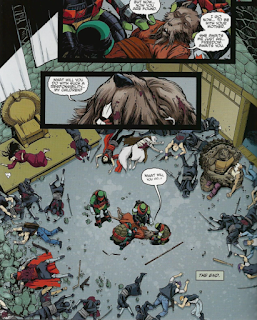 Dying, Splinter tells his sons that they have won their freedom.  Before breathing his final breath, he asks what they will do with it.

*This story deviates from the events of TMNT (IDW) #22.

*In the ongoing timeline, Splinter made an alliance with Old Hob and Slash in TMNT (IDW) #23.

*“Deviations” was a 5-issue event running through several of IDW’s licensed titles, depicting changes in established events for each universe creating “what if?” scenarios.  Other titles involved were Ghostbusters, The X-Files, Transformers, and G.I. Joe.

*This issue also included a cover inks gallery, script excerpts, and a step-by-step breakdown of the art from thumbnails to colors for pages 4-5.

*This issue was originally published with 2 variant covers: Regular Cover by Howard, and Subscription Cover by Nick Pitarra and Mike Garland.

The old “What If?” type of story doesn’t seem to be as popular today as it was back in the ‘80s.  It seems that with modern readers, “what counts” tends to outweigh “what’s good” and folks gravitate toward canon storylines over alternate universe one-shots.  I’ve got a few theories as to why the “What If?” tale fell out of vogue, and since this is my blog, I’m gonna go on a tangent about it.

What made those sorts of stories appealing back in the day was that they offered a novelty.  They called a “do-over”, at least on an imaginary level, and showed you what could have happened if things had been different.  Nine times out of ten, the slight deviations in history led to everybody dying, but that was also part of the appeal.

What if Spider-Man had saved Gwen Stacy from falling?  It turns out the Jackal would have killed everyone at the Daily Bugle.  What if the original X-Men had defeated Krakoa without needing the new international team’s help?  The Jackal blows up the X-Mansion and kills everybody.  What if Elektra had killed Bullseye instead of the other way around?  The Jackal kills Aunt May on his way to the grocery store.  The point is that any deviation in established continuity ultimately ends with the Jackal murdering all the supporting characters.

I think the reason “What If?” stories were more popular in the ‘80s than they were afterward is because back then, comics hadn’t called quite so many do-overs in their mainstream canon.

Now, “What if Jean Grey hadn’t died piloting that spaceship back to Earth?” is no longer a “What If?”, it’s canon.  “What if Bucky had survived the exploding plane?”  No longer a “What If?”  Or how about, “What if Spider-Man had never married Mary Jane?”  We don’t need to imagine that one anymore, either.

The need for the “What If?” story dissolved when the writers on the main titles realized they could just implement those revised histories whenever things got inconvenient.  And just so nobody thinks I’m picking on Marvel while turning a blind eye to DC, I’ll say “Crisis on Infinite Earths”, “Zero Hour: Crisis in Time”, “Infinite Crisis” and “Flashpoint”, and leave it at that.

So yeah, the “What If?” tale might seem quaint by today’s standards, but I think they still have appeal for those willing to give something that “doesn’t count” a chance.  And in regards to IDW, they generally don’t call “do-overs” on continuity (except with G.I. Joe, I think), so the Deviations line has a bit more of a novelty value.

So far as this event is concerned, the only other one I’ve read is Ghostbusters: Deviations and it was pretty bad.  I mean, I can make my peace with poop jokes, but the writer only wrote one poop joke and then stretched it out over the course of the whole one-shot.  I think that one joke repeated infinitely was the only actual joke in the whole comic.  It was a good springboard idea (what if the Ghostbusters hadn’t thought to cross the streams to beat Gozer) sabotaged by some very amateurish writing.

TMNT: Deviations, on the other hand, fairs a good deal better.

It follows that formula of “if something different had happened EVERYONE WOULD BE DEAD” but as already stated, I always got a kick out of that gimmick.  The Jackal isn’t explicitly behind everyone dying in this comic, but I think we all know he was the true puppet master.

Like a lot of those old comics, it takes a year-long story arc and tries to pare it down to one issue.  So we essentially get “City Fall in 24 pages”.  All the highlights are there and the extraneous stuff is excised, so Waltz narrows things down pretty well.  The story moves at a frenzied pace and a lot of the events seem spontaneous, but that’s also part of the entertainment.  Just… suddenly… Hun!  Blowing Shredder’s head off with a shot gun!  Well okay then.

Now, when I say “spontaneous” I mean that I’m looking at this one-shot as a one-shot.  It’s actually more a direct continuation of the “City Fall” storyline, taking the character arcs in different directions.  So if you read TMNT #1-22 and then decided to read this comic next instead of #23, everybody’s decisions would feel slightly more organic.  But if you’re trying to read this comic in a vacuum?  Yeah.  Ghost mom shows up in one panel and smiles and then the good guys win, The End.

As for art, Zach Howard has previously done some variant covers for the series, but this is his first go on interiors.  His style is very dark, gritty and HEAVILY inked.  It fits the tone of the story, which is all about everyone gratuitously dying in horrible ways.  At times the inks are perhaps a little too muddy and you might have to strain to tell what’s going on in a panel, but it’s never so bad that I'd call it unreadable.

Pattison’s colors adapt to Howard’s style; they’re flatter to suit all the inking.  Cory Smith does two pages depicting Splinter and Kitsune in the Astral Plane and you can see for yourself how Pattison adjusts her methods to suit the artist.  The colors on those pages are lusher and more nuanced.

And on the topic of using Smith for the Astral Plane segments, I thought that was a neat touch.  Smith’s lines are cleaner and his characters look better groomed and prettier.  It creates a nice juxtaposition with Howard’s pages set in the real world, where everyone is ragged and brutalized and bloodied and ugly.

In conclusion, I suppose I wasn’t too excited with this one-shot, but ultimately it made for a fun read.  It ran with the trope of “everybody DIES!” which is, well, predictable but certainly amusing.  I kinda hope this comic gets included in future reprints of the “City Fall” trade.  It might make a good Clue-esque bonus ending.  “So that's how things really happened.  But here’s how things COULD have happened…”