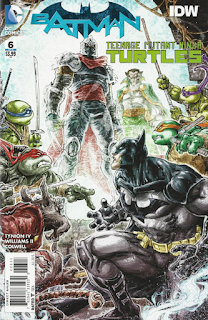 In Arkham Asylum, the mutant villains attack Batman and Robin, with Bane (elephant) leading the way.  Batman takes him out with a taser while Robin knocks Harley Quinn (hyena) out with a kick.  They’re still surrounded, as Poison Ivy (mantis) corners them and Mr. Freeze (polar bear) readies his ice gun. 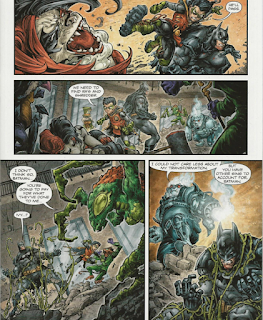 In the Batcave, The Turtles, Splinter, Casey and Alfred watch the fight through the monitors.  Leonardo, still wobbly, insists they go and help, though Casey reminds them that Harold will only be able to activate the portal for a brief moment, and when it closes back up, they may not be able to lock onto this dimension again.  And if the Turtles don't go home pronto, their mutagen will wear off and they'll demutate.  The portal beacon activates and Casey asks the Turtles what they plan to do.

Back at Arkham, Batman has been frozen from the neck down.  He tells Robin to continue with the mission alone while he keeps the head honchos busy.  As Robin leaves, Batman calls out Ra’s Al Ghul and the Shredder.  The leaders present themselves and Batman tries to turn them on one another by warning Shredder that Ra’s will betray him.  In actuality, though, the two villains are getting along just fine and plan to spread their operation from Gotham to all the major cities of the world, turning all the super villains into mutants at their command. 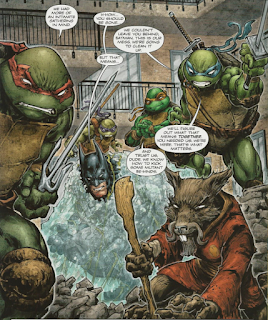 The Joker (cobra) then slithers up to Batman and prepares to inject him with his venom when Raphael leaps in and takes him out.  The rest of the Turtles and Splinter show up and Donatello uses a torch to free Batman from the ice.  He tells Batman that he completed a certain unfinished weapon he found in the Batcave and loaded it into the Batmobile.

While the Turtles and Splinter take on the mutant villains, Batman retrieves Donatello’s weapon, the Intimidator Suit, and then takes on the Shredder.  The Turtles work their way through the bad guys and challenge Ra’s.  Both sides fight hard and ultimately, Batman is able to overpower Shredder while the Turtles take Ra’s down through sheer numbers.  Ra’s calls for his Assassins and Foot Soldiers, but Splinter has taken all of them out.  On top of that, Robin returns with word that he’s disarmed the remaining henchmen and has led the GCPD into the Asylum.  Cutting his losses, Ra’s retreats with a smoke bomb. 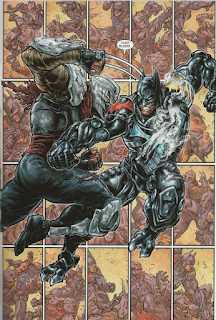 Suddenly, a portal opens up and out step Casey and April.  April explains that when Casey returned without the Turtles and gave her and Harold an update, they worked extra hard to stabilize the portal and get another bead on their dimension.  However, the gateway will only stay open for about 20 minutes.  Leonardo figures that should be enough time to get the Shredder and all the Foot Soldiers back through.  As everybody leaves, Raph takes off his bandana and gives it to Batman.  He says that Batman may have lost a family in his dimension, but if he ever decides to visit theirs, he’ll have another family waiting for him. 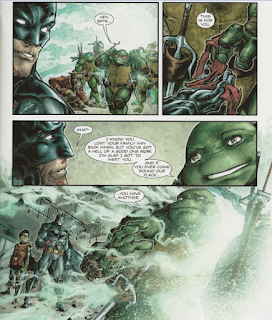 Down in the Batcave, Batman gets a situation report from Commissioner Gordon.  Arkham has been retaken, the mutagen is wearing off of the villains, and everything should go back to relative normalcy.  Robin notices the date and asks Batman if he’d prefer to be alone on the anniversary of his parents’ death.  Batman says he’d rather do something together as a family and, with Alfred’s help, they begin repairing the Intimidator Suit.

*This miniseries was initially followed by another crossover (albeit starring different incarnations of the characters), beginning with Batman/TMNT Adventures #1.

*Harley Quinn (mutant hyena) was not in the villain splash page from last issue, though she was on the cover (along with other villains who didn’t appear).  IDW editor Bobby Curnow says she wasn’t in the script and was likely added late to appease her colossal fanbase.

This has been great pretty much all the way through.  We got to see a lot of cool stuff during this crossover, and while all the tropes were present, the 6-issue length meant they weren’t dwelt on for too long and every aspect got time to breathe.   We got to see the Turtles and Batman fight, team-up, face each other’s bad guys, meet each other’s sidekicks, and along the way there was lots of other cool shit like mutant villains.  No, I’m pretty much 100% satisfied with this miniseries.

Some people have written in the comments section, both here and on other sites, that they felt the “power levels” of the characters were inconsistent.  Leo getting a tag in while sparring with Batman seemed to be a point of contention, so I’m sure those same people took umbrage with all four Turtles besting Ra’s.

But look, this is an “Elseworlds” to both continuities and is just meant to be fun.  Leo tagging Batman once is not a fuckin’ deal-breaker, and I don’t think even Denny O’Neil would get up in arms seeing all four Turtles get the better of Ra’s in an unfair fight.  I don’t put too much stock in “power levels” when it comes to storytelling, at least not in little moments.  The winner is always going to be who the writer needs it to be; that’s been Stan Lee’s stock response to every “who would win in a fight” question he’s gotten over the past fifty years.

I mean, jeez, Batman beats Bane in this issue with a taser.  I’d say that’s more bullshit than Leo tagging Batman in a sparring match, but who cares?  Bane wasn’t the epicenter of this story so he needed to be taken out to move things along.  C’mon, guys.  Don’t get hung up on this shit and try to enjoy the awesome silliness of Batman and the Ninja Turtles fighting mutant Arkham inmates.  Is there so little joy in your lives you can't take pleasure in polar bear Mr. Freeze?

I suppose if I had to knock anything in this installment, it would probably be the manufactured tension of Casey and the dimensional portal.  He spends an extensive two pages explaining how the portal can’t be opened again once the Turtles miss their window to get home.  Of course, the portal reopens at the very end and April's just like, “Nah, forget about everything Casey said earlier, it’s not that big a deal”.  I mean, I know that ALL the tension in these sorts of stories is manufactured, right down to “will the bad guys WIN!?” but I’m sure there must have been a better way to do it than this.

Williams goes out with his A-game in this final issue and there’s a lot of pretty stuff to look at.  You've got a couple great splash pages and a nice two-page spread, but the standout sequence is the splash page covering Batman’s fight with the Shredder.  Twenty (TWENTY!) panels in the background overlaid with pin-up art of the two going at it.  I hope that in the trade paperback collection, they include the panel-only version as a bonus so you can see the art blocked by the overlaid figures.  Williams didn’t phone any of this in and it’s amazing.

As for continuity, despite editorial insistence that this crossover is non-canon to the IDW series, some folks want to figure out a means to squish it in there ANYWAY.  It’s tempting, I know.  The best potential placement is probably between TMNT #37 and TMNT #38; after Shredder and Krang declare war on each other, before Donatello initiates his alliance with the Foot Clan, and before Harold works out all the bugs in the teleporter (we never see it on their end in this mini, but considering how troublesome it is, it’s clearly in worse condition than it was in TMNT/Ghostbusters).

But again, this really isn’t supposed to fit into the continuity of the series.  I mean, what happened to Shredder after he and the Foot got sent back to the IDW universe?  Surely he didn’t go to jail, so I guess he just slipped away when no one was looking?  Then never mentioned such a humongous defeat again?  C'mon.