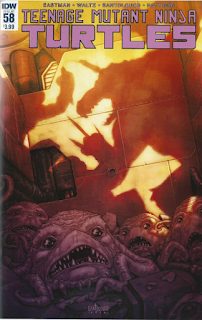 Utroms Kleve and Montuoro are furious at Donatello’s assertion that Ch’rell committed war crimes and demand he be revived at once.  Donnie asks to speak with Ma’riell separately and gives her the lowdown about General Krang’s attempt to kill off Earth so it could be terraformed into New Utrominon and his current whereabouts in a Neutrino prison.  Ma’riell is not surprised and confesses that her brother would be just as dangerous as Krang and should be kept in stasis. 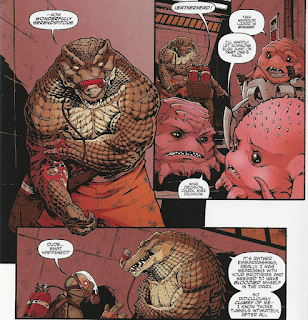 Elsewhere, the Utroms Yoom and Churk wake up and, recognizing Michelangelo as one of the “warrior lizards” they ran into long ago, attack him.  Leeshawn calms them down and explains things when suddenly Leatherhead returns, bleeding.  He says that he cut himself in the darkness.  He claims that the other Turtles asked him to retrieve Michelangelo and send him back to the tunnel to help them.  Mikey believes Leatherhead and rushes away, leaving the gator with the three unguarded Utroms.

Running past the lab, Mikey tells Donnie that he’s going into the tunnels and left the Utroms with Leatherhead.  The name “Leatherhead” momentarily revives the Fugitoid, who mumbles out a warning that Leatherhead was the one who decapitated him.

Down in the tunnels, Mikey finds Leonardo, Raphael, Tragg and Granitor, who are recovering from the sound thrashing they got from Leatherhead.  Comparing notes, the Turtle realize Leatherhead’s scheme and rush back to the Technodrome.  However, they’re slowed down by having to carry Tragg and Granitor.  Along the way, Granitor explains why Leatherhead would hate the Utroms so much… 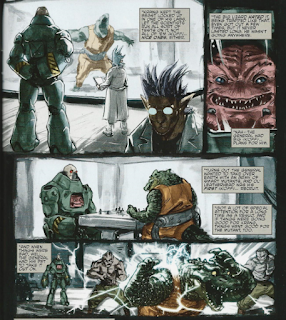 In the Technodrome, Leatherhead is about to kill the Utroms when Donnie stops him.  Leatherhead makes short work of Donnie, but the other Turtles soon arrive with powerful cattleprods (the ones Krang used to keep Leatherhead in line).  Leatherhead grabs Donnie and drags him to the teleporter room, demanding to be sent to New York.  The Turtles are unwilling to set him loose, so Leatherhead grabs Mikey and removes his breathing apparatus.  With Mikey suffocating, Donnie has no choice but to send Leatherhead to New York.  He tells his brothers to go as well while he stays behind to work the machine. 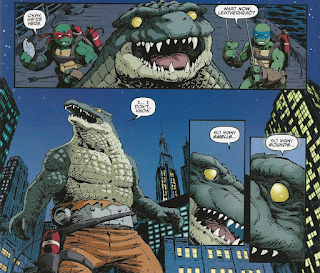 The Turtles arrive on a pier and Leatherhead releases Mikey.  Overwhelmed by all the sights and sounds, Leatherhead escapes into the water, vowing to return.

The Turtles then return to Foot Clan HQ, though Mikey insists on staying at the Lair since his opinion on Splinter leading the Foot hasn’t changed.  Before Leo and Raph can bid him goodbye, they spot Kitsune and Alopex pummeling Foot Soldiers and about to kill an unconscious Splinter.

*Yoom and Churk met the Turtles in prehistoric times in TMNT: Turtles in Time #1.

At three issues, it feels more like we only got a taste of what IDW’s Leatherhead will be like than the full spread.  As an introduction, the arc sets him up as a player to be watched for in the future, but the story itself somewhat peters out in this last act.  But that’s pretty much what introductions are for, so I’m sure we’ve got more interesting Leatherhead stories ahead of us.

The tension in this issue relies on Mikey being an idiot and I kind of feel like there was a discrepancy between the art and the script.  Leatherhead returns from the tunnels bleeding freakin’ buckets and mumbles out an unconvincing “Oh, I cut myself, how clumsy of me”.  I know Mikey’s modern portrayal is as the mentally incompetent Turtle, but c’mon.  At this point, the reader also knows Leatherhead’s deal, so it just makes Mikey’s reaction feel all the more “plot convenient” rather than realistic.

And anyway, Leatherhead started the arc out wandering around in prison jumpsuit pants and with restraining devices fastened to him.  No one batted an eye, so I guess EVERYONE was taking stupid pills for this plot to work.

The IDW guys are kind of doing the same thing with Leatherhead that they did with Alopex, where the character is shown villainously engaging in heinous acts but we’re still supposed to view them in a grey area.  With Alopex, she was shown slaughtering people and enjoying it; murder was fun to her.  For the past couple of years, we’ve been expected to just go ahead and forget about that so her transition to ally might be more convenient (admittedly, given the ending of this issue, that may change).

Leatherhead opened this story by slaughtering a bunch of innocent Utroms as they slept.  You can give us a sob story about how Krang was mean to him, but that doesn’t erase multiple acts of premeditated murder.  You don’t really bounce back from that with an “I was misunderstood” and expect everyone to let it go.  It didn’t work for Alopex and I don’t see it working for Leatherhead.

With him in New York now, I suspect he’ll find his way onto Old Hob’s Mutanimals.  With Slash deserting, there’s an opening for a hulking bruiser.  And if he does end up becoming Slash’s replacement, that’ll alleviate my earlier concerns about Leatherhead and Slash being too similar.  Hey, if the writers acknowledge it then I can’t call foul, right?

As much as this was the introduction of Leatherhead, the arc also set up Ch’rell.  He’s got two Utroms who want him free (Kleve and Montuoro) and potentially two Rock Soldier henchmen (we don’t find out what became of Tragg and Granitor, but presumably they were given breathers and put in cells).  I’m still curious about what they’ll do to make Ch’rell distinct from Krang, but we’ll just have to wait and see.

Art-wise, there’s a neat transition at the end of the story.  When the Turtles arrive in New York, it switches from Santolouco to Wachter, who will be drawing the next arc.  I love it when the comic does stuff like that; finds these organic transitioning points in the narrative to move from one artist to another rather than having the change occur mid-scene between issues.

And even if I was a bit underwhelmed by the last act of this arc, Santolouco nailed it on the pencils all the way through.  We get a long battle between the Turtles and Leatherhead (7 pages) and the Turtles take it on the chin through most of it.  I like seeing that sort of thing; it establishes Leatherhead as no pushover and the Turtles essentially lose more than they win in this encounter (Leatherhead gets pretty much everything he wanted).