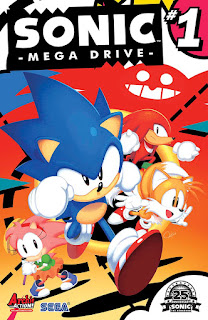 Over at AIPT, I had the chance to interview Ian Flynn, writer of Archie's Sonic the Hedgehog comics.  Specifically, I got to ask him about the upcoming Sonic: Mega Drive special.

FYI, the interview questions were, uh, "trimmed" by an Archie publicist.  I had some good ones about the reboot and character availability, but none of that made it to him.  So the interview wound up being much more "soft ball" than I had intended.

I wanted to ask him about his work on IDW's Turtle books at the end, but that didn't fly.  Ah well.