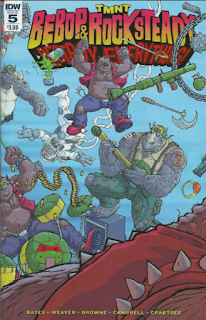 The 79th Dimension.  The Time Mistresses scramble to try and send the countless Bebops and Rocksteadies back to their proper time streams, but Lord Simultaneous won’t be able to come to help before its too late.  Renet has an idea and tells the Turtles to come with her so they can steal an experimental craft called the F4 Time Intruder.  Together, they take it to the juncture where all time tunnels pass.  Renet sets the juncture to dump all but the original Bebop and Rocksteady into a single dimension.  A quick fix, but it will cause all of time to end if they don’t get the time scepters away from Bebop and Rocksteady in 10 minutes. 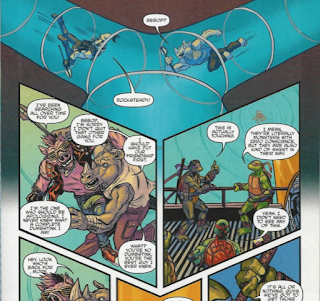 Inside the time tunnels, Bebop and Rocksteady are finally reunited.  They apologize for their earlier disagreements and make peace.  Just then, they’re intercepted by the Turtles and Renet in the Intruder.  The Turtles take the mutants on and eventually manage to seize one of the scepters.  Pepperoni catches the other one and the Turtles and Renet escape the time tunnels in the Intruder.  Renet then sends Bebop and Rocksteady back to where they need to go to maintain the integrity of the TMNT’s universe…

The Cretaceous era.  Bebop and Rocksteady land on a beach and encounter Savanti Romero, fresh off his latest defeat.  They ask to take him up on his earlier offer to be his henchmen, and though confused, Romero enlists them.

The 79th Dimension.  Renet has one last bit of business to do.  She saved one other set of Bebop and Rocksteady from being dumped into the “Bopsteady Universe”; a pair of corpses.  They then travel back to the Cretaceous, shortly after they defeated Bebop and Rocksteady there.  They swap the original Bebop and Rocksteady with the corpses and send them back to Rio (meanwhile, the corpses will fossilize so that they can be discovered and sent to the museum in the present).  Renet looks upon her older self’s body which has already begun to mummify and recalls her last words about the gem and the scepter. 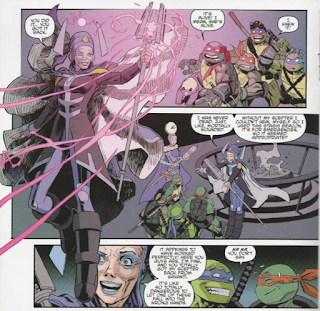 New York City, the present.  The Turtles and Renet return to the museum and Renet uses her scepter on the gem embedded in her mummified older self.  It revives her double, who had used the gem to go into an emergency stasis mode.  Her older self, recalling the adventure, compliments Renet on her fine work and, after taking back her own scepter, leaves to her proper place in time.  Renet prepares to do the same, though she still wonders whatever became of Savanti Romero…

Rio, one week ago.  Savanti, fresh from his defeat in the Cretaceous, goes to recruit Bebop and Rocksteady.  They haven’t met him yet and, thinking he’s a dweeb, beat him up and steal his scepter.  Savanti then uses a teleportation device he stole from the Utroms to escape to an unknown place and time.

Rio, the present.  Bebop and Rocksteady wake up and recall all their adventures in time, but aren’t too fazed by them.  They step outside and find their Cruiser parked on the street and decide to take a road trip back to New York City.  Unbeknownst to them, Anchovy has hitched a ride in the back seat. 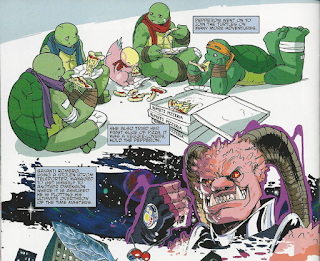 Epilogue.  The Turtles return to business as usual, but now with Pepperoni as their new pet!  Savanti’s whereabouts remain unknown.  The duplicate April who was mutated into a wasp-woman wound up being send to the 1960s with the duplicate Fugitoid.  She took the name Nightbug and together they fought crime.  The Bopsteady Universe remains intact, though undiscovered by any dimensional explorers.  As for Bebop and Rocksteady, they crashed their Cruiser after two blocks.

*This story is continued from TMNT: Bebop & Rocksteady Destroy Everything! #4.  Chronologically, the TMNT Universe: The War to Come story arc takes place next.

*All that bullshit in the Cretaceous era happened in TMNT: Bebop & Rocksteady Destroy Everything! #2.

*April was mutated into a wasp, briefly, in the Fred Wolf TMNT episode "Revenge of the Fly".  Presumably, the choice of mutation for the April duplicate that became Nightbug was a reference to that.

*This issue was originally published with 2 variant covers: Regular Cover by Nick Pitarra and Michael Garland, and Subscription Cover by Ryan Browne.

That about ties everything up.  Or I think it does.  I’m still not sure how much of what we saw still “counts” in the restored timeline.  Did the duplicate April that became Nightbug get sent to an alternate past, or was she fighting crime in the ‘60s of the real timeline?  And even if she died of old age, wouldn’t there still be a duplicate Fugitoid around?  And what about Wingnut, Screwloose, Soakorr and Angleron?  Do they still “count” or were they returned to their stasis pods and blown up with the rest of Stockgen once the timeline reset?

Maybe we’ll find out.  I dunno.  To be honest, I didn’t really care if Bates and Weaver restored the integrity of time and space by the end of the issue.  I was on pins and needles the whole time because I wasn’t sure if Anchovy was going to make it back or not. 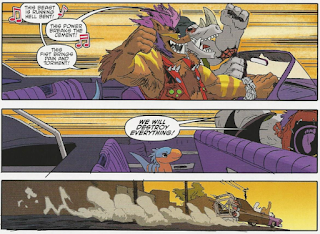 Much to my surprise, Bebop and Rocksteady haven’t suffered from “villain decay” yet.  They’re still presented as being absurdly strong and more than a physical match for the Turtles on their best day.  I think what makes a difference is that the Turtles are finally figuring out just HOW to fight Bebop and Rocksteady, and that’s what’s making them an easier match, not so much any “decay” on their part.  Just like in TMNT #50, they beat the mutants by causing them to hit each other with their own muscle.  The exercise might be getting a little tiresome, and I do hope that doesn’t become the catchall way to stop Bebop and Rocksteady in every encounter, but it still seems consistent with their personalities (the two dimwits will NEVER learn how to overcome this weakness).

In another case of keeping characterization on point, Weaver and Bates didn’t forget that Savanti Romero is a fuckin’ stooge.  He’s played menacingly throughout the miniseries, but when he finally confronts Bebop and Rocksteady to recruit them in this issue, they curb-stomp his bitch ass and send him crawling away like a punk.  I LIKE Savanti Romero, I like him a lot.  But the fact that he isn’t a serious threat, the fact that he’s a guy with god-like powers and no clue how to use them, is part of the reason WHY I like him so much.  He’s a threat because of his power and ambition, not so much his intellect; which, in a way, actually makes him perfect company for Bebop and Rocksteady.  So I’m relieved that Savanti is still Savanti: All talk and no brains.

Ryan Browne does the lion’s share of art with this issue, handling most of the sequences taking place in the time tunnels.  I think he colored himself (Crabtree is only credited for coloring the pages after Browne was done), and maybe that wasn’t such a good thing, as he either uses too light a red on Raph or too dark an orange on Mikey.  Point is, I had trouble telling them apart via bandanas.  His linework was good, though; capturing the irreverent cartooniness that has made this miniseries so refreshing.

And FYI, Ryan Browne should not be confused with Ryan Brown, the old school Mirage TMNT artist and writer.  It’s all in that extra “e”.

Bates, Weaver and Campbell are great, but I’ve talked about their contributions to this mini already so I won’t repeat all my praise.  I will say that the credits page isn’t quite detailed enough as to who did what pages of the issue.  It looks like some of the artists did certain panels, sharing pages.  Panel 1 of Page 20 is totally Campbell, while panels 2-4 are certainly Bates (though Bates is the only one credited for that page).  Likewise, Page 12 is credited exclusively to Weaver, though I’m pretty sure the top 2 panels are Bates.

It keeps with how the artists were assigned to certain locations or time periods, even if it bled onto somebody else’s page.  Again, I really dug distinguishing the artist transitions like that; way cooler than just having them do a set number of pages and switch regardless of whether or not it broke up the flow of a narrative sequence.

Bebop & Rocksteady made for a very exciting June.  I loved having a weekly story to look forward to and I’m sure it was no small task to write, draw, edit and publish it all on time.  It was weird and fun, and while the larger lasting effects on the narrative are uncertain, it DID bring Pepperoni back (and introduce Anchovy), so the ends justify the means.

Back when I reviewed the Casey & April miniseries, I remarked on how I didn’t enjoy the juvenile romance tone of the story, but that I appreciated IDW dabbling in different genres and styles.  Bebop & Rocksteady is much like that; something totally distinct from the rest of the IDW canon in its execution and tone.  It’s a screwball roadtrip comedy, but still firmly entrenched in the storyline of the ongoing series.

It may not have been for everyone, and judging by some of the reviews I’ve read online it certainly WASN’T.  But I guess I’m just on the other side of the coin from Casey & April.  Some people loved that one to death and I hated it.  This mini didn't appeal to 100% of the crowd, but I was all over it.  But by going out of their way to experiment with these different techniques and flavors, IDW is ultimately offering Turtle stories for EVERYONE.