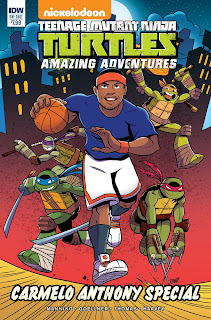 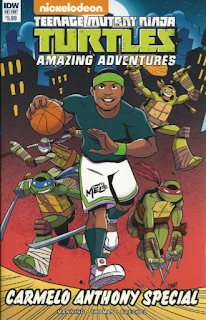 Down in the lair, Michelangelo is so psyched to be attending the night's basketball game that he's shooting trick shots around the living room.  He spills Master Splinter's tea and gets a basketball lobbed at his head in return. 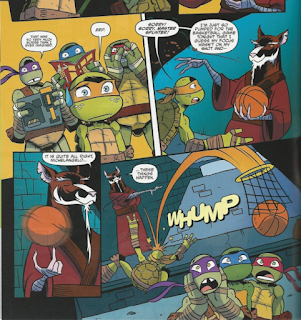 At Foot Clan HQ, Baxter Stockman is busy trying to create a new mutagen that will give the Shredder a mutant army mindlessly loyal to him.  He mixes in a brain worm, but accidentally drops his chocolate bar into the concoction.  He presents his scheme to the Shredder anyway, and after looking at the idiocy of Bebop and Rocksteady, Shredder agrees to let Stockman experiment on a test subject.

The Turtles arrive at "the basketball game" (IDW didn't pay to use the name or trademarks of the New York Knicks or even the NBA, apparently) and perch themselves behind the jumbotron.  Mikey gets one look at Carmelo Anthony and immediately begins idolizing him. 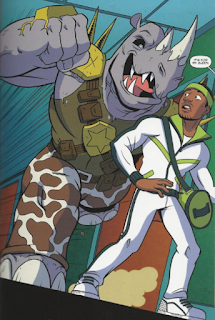 Meanwhile, Bebop and Rocksteady are cruising in their van, trying to find an athlete to turn into a mutant for Stockman.  Bebop spots a billboard with Carmelo Anthony on it and gets an idea.  Later, when the game is over and Anthony exits the locker room, Bebop and Rocksteady ambush him.  He runs out into the alley, but happens to cross paths with the Ninja Turtles as they're leaving the game.  The Turtles try to save Anthony, but Bebop and Rocksteady manage to throw him into the back of their van and get away.

At Foot HQ, Stockman forces his mutagen down Anthony's throat and the all-star begins to mutate.  Outside, the Turtles are figuring a way of breaking into the enemy stronghold to save Anthony when a pair of vans pull out of the garage at high speeds.  The Turtles leap onto the roofs of the vans and catch a ride.

The vans stop at the pier and Stockman, Bebop and Rocksteady climb out.  They challenge the Turtles to do battle with their newest Foot Clan recruit, Carmelo Anthony, who has been mutated into a hulking armadillo clad in basketball-themed armor.  Leonardo suggests the name "Armordillo", but Michelangelo overrules him and dubs the monstrosity: Carmadello! 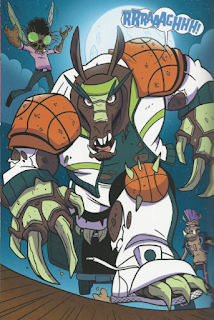 The mindless Carmadello attacks the Turtles.  Raphael attempts to slash him with his sai, but his armor is too thick and he can't put a dent in him.  Leo and Mikey get an idea and steal a fishing net from a nearby boat.  They toss the net onto Carmadello, subduing him, but the monster won't calm down.  That is until Mikey shows him his official Carmelo Anthony Fanclub membership card and Carmadello begins to remember who he really is.

The Shredder then arrives with some Footbots and orders Carmadello to destroy the Turtles.  Carmadello revolts, so Shredder orders the Footbots to destroy his unruly experiment.  The Turtles and Carmadello fight side by side, at least until Rocksteady nails their new friend with a rocket and knocks him into the river.  As the bad guys escape, the Turtles swim to the bottom of the river to save Carmadello.  When they emerge, Carmadello has reverted back to Carmelo Anthony. 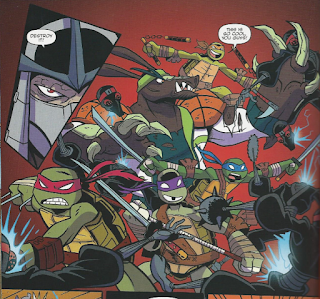 Donatello suggests that Stockman's new mind-controlling mutagen was tainted somehow, hence how Anthony was able to reassert mental control and also why it worked out of his system like a drug.  The Turtles tell the woozy Anthony that it was all a hallucination and they aren't real, then they disappear into the shadows.  The cops arrive and help Anthony into the back of their car to get him to a hospital.  For a second, Anthony's hand mutates back into a claw and he isn't sure if what happened to him was real or a hallucination.

*This one-shot special was released as part of a larger promotional crossover between the Teenage Mutant Ninja Turtles and NBA athlete Carmelo Anthony.  Anthony also made a cameo appearance in the TMNT: Out of the Shadows film (released on June 3, 2016) and designed his own line of TMNT-related apparel exclusive to Macy's under the TMNT x MELO branding.

*Why Carmelo Anthony?  Because he plays for the New York Knicks and the Turtles are from New York so... Is that really it?  Is that the reason?  I guess it makes about as much sense as Michael Jordan teaming up with Bugs and Daffy to fight space aliens.

*This Special was published the same day as TMNT Amazing Adventures #10.

*The original solicited cover features Anthony wearing orange and blue, the colors of the New York Knicks.  The published cover changed the colors of his clothing to green and white, probably because IDW didn't pay a license to the NBA or the Knicks and they didn't want to risk implying a Knicks connection.  The published cover does, however, include the logo to Anthony's TMNT x MELO clothing line as a cross-promotion.

*The solicited cover also mistakenly included credits for Caleb Goellner and Ben Harvey, neither of whom contributed to this issue.  Their credits were removed for the published cover.

*This issue was originally published with 2 variant covers: Regular Cover by Chad Thomas, and Subscription Cover by Jon Sommariva.

I was late to reviewing this issue because conceptually it didn't interest me and I had no expectation of it being any good.  But you know what?

It's actually one of the best issues of the IDW's Nick-based TMNT comics!

To get it out of the way, Carmelo Anthony's inclusion in the story is mostly incidental.  He could've been swapped with a generic made-up athlete character and it would have had no impact on the story.  IDW didn't pay to use trademarks belonging to the NBA or the New York Knicks, so it doesn't have any of that sort of authenticity going for it; just the star power of Anthony-himself.

And he leaves no impact on you whatsoever.  Anthony gets barely a handful of scattered lines throughout the issue and they're all bland hellos and goodbyes.  He has no personality to speak of.  I mean, I know WHY they went with him, because Viacom had this weird marketing collaboration going between him and the Ninja Turtles to tie-in with Out of the Shadows... but Michael Jordan he ain't.  He's basically mutant fodder for the bad guys and even after he gets transformed, he's a mindless beast with nothing to say or do to make you remember him.

So why the heck did I say this was a great issue?

Because it's really funny.  Matthew Manning brings his A game to the script and Chad Thomas does likewise with the art and this whole 30-page special is fun to read and to look at.  It's packed with cute, vibrant visuals and the dialogue between the characters is full of charm and pep.  Bebop and Rocksteady steal most of the best moments for themselves and their back-and-forth exchanges are some of the best they've ever gotten in this series.

"For it to work, we must find athlete.  Someone strong!  Someone who can lift ox or eat a giant bowl of potato."

"See, this right here is why you guys lost Rocky IV."

Even Shredder gets a couple moments of comedy, not so much in that he's aiming to be funny but in the way he reacts to the stupidity of his blundering hench-mutants.

For something that was doomed to be a dated cross-promotion, none of the talent involved phoned it in.  I do wish the actual star of the issue, Carmelo Anthony, had gotten more to say and do to make his inclusion worthwhile, but I won't deny that the Carmadello mutant had a great design and looked like something out of the '80s Playmates toyline.  Almost makes me forgive that Manning and Thomas didn't use this as an opportunity to introduce Halfcourt into the Nickelodeon TMNT continuity. 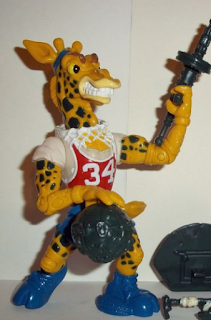 They'll never have a better chance.  But it's okay.

The 30-page length is another bonus, giving the plot time to breathe and the comedy a chance to grow naturally from the story.  The Amazing Adventures method of taking a 20-page story and cutting it into two 10-pagers has been a little stifling, as everything feels like a race to fit the plot in while also allowing for a recap in the middle.  This full-length issue was a refreshing change of formula.

All-in-all, if you missed this special when it came out, I'd recommend tracking it down, at least if you enjoy the Amazing Adventures series.  It's a gem from that corner of the IDW Turtle publications, even if the heavily promoted celebrity guest star is the least important part of the issue.