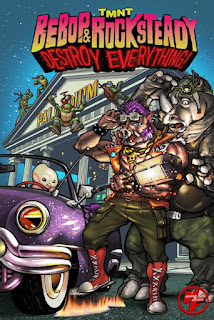 The Cretaceous era.  Four red-bandana-wearing Turtles battle Savanti Romero on a bridge made of bones.  Romero is defeated when lightning strikes the Time Scepter he’s holding and sends him plummeting into the waters below, presumed dead.  He survives… 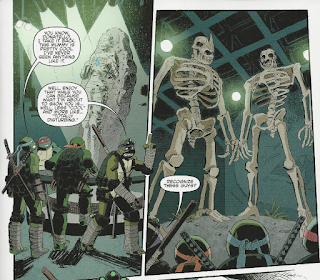 2016.  The Turtles sneak into the Natural History Museum to scope out a recently discovered mummy of a supposed sorceress.  They find the sorceress as well as two strange skeletons that were exhumed with her: The bones of Bebop and Rocksteady?

Rio De Janeiro, Brazil.  Bebop and Rocksteady have messed up their gig with the Lamina Negra Commandos by accidentally sinking a ship containing several expensive war-bots (robot soldiers).  The leader, “Reggaeton”, sics the remaining war-bots on Bebop and Rocksteady, who destroy them and slaughter the rest of the Commandos (while apologizing profusely for screwing up).  With everything ruined, the mutants head into town and wallow in self-pity. 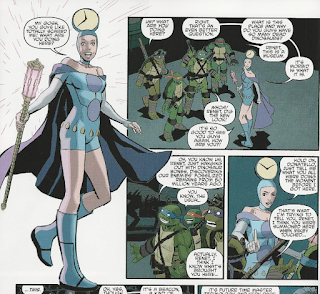 Back in the museum, Michelangelo notices an amulet on the mummified sorceress and touches it.  Renet suddenly appears before them, having been summoned by the amulet.  She recognizes the Turtles immediately, but doesn’t remember their previous time travelling adventures.  Renet suggests that the Turtles SHE knows are alternate ones from another universe, while she, as a multiversal singularity of which no alternate versions exist, simply hasn’t met these Turtles yet (it was an older version of her that they met).

Everyone is confused, but Renet is particularly disturbed when she recognizes the mummified sorceress as herself.  She ponders how she somehow went to the Cretaceous era and died, especially considering she survived her last trip there.  She figures Savanti is still alive with her Time Scepter and that her older self programmed the amulet to summon her to defeat him upon being activated by the Turtles.  Since she’s linked to all incarnations of herself and her Scepter across the time stream, Renet locks onto the missing Scepter and teleports herself and the Turtles to go get it back. 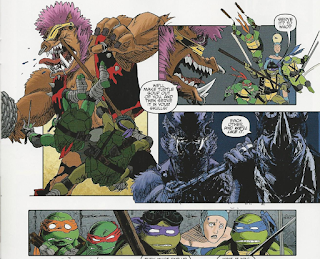 Rio.  Bebop and Rocksteady recall the weird devil-looking guy who tried to hire them while they were working for the Commandos.  They beat him up and took his wand, but wonder if he’d still be willing to hire them now that they’re between jobs.  Rocksteady digs out the wand (the Time Scepter) and considers returning it to the devil-guy when it suddenly lights up and Renet and the Turtles appear in the room.

Bebop and Rocksteady are more than happy to go another round with the Turtles and a fight breaks out.  Leonardo orders his brothers to use their foes’ strength against them, tricking the ex-Foot mutants into hitting each other.  Unfortunately, Rocksteady accidentally bonks Bebop on the head with the Scepter and they disappear. 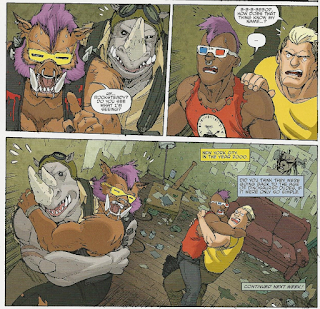 The pair reappear back in New York and decide to head to their old hideout to rest.  There they find two humans squatting in their digs… Their younger selves, before they were mutated?  As it turns out, they’ve traveled back to the year 2000.

*The story continues in TMNT: Bebop & Rocksteady Destroy Everything! #2.

*Savanti Romero’s defeat at the hands of the Mirage Turtles as seen at the beginning of this issue happened in Tales of the TMNT (Vol. 1) #7.  The narration mentions how he was once an apprentice to Lord Simultaneous until he was corrupted by power: His human years were shown in “The Paradox of Chudnovsky” while his banishment was mentioned in his first appearance in TMNT (Vol. 1) #8.  The narration also mentions how his wife was warped and changed, referring to Savanti Juliet, as seen in TMNT (Vol. 1) #42.

*Raphael mentions meeting dinosaurs in person; the Turtles traveled back to the Cretaceous era in TMNT: Turtles in Time #1.

*Bebop and Rocksteady were defeated by the Turtles and left the Foot Clan in TMNT (IDW) #50.

*The Turtles last met Renet in TMNT: Turtles in Time #4.  They first met her during the Battle Nexus Tournament in TMNT Annual 2014.

I’m not sure if TMNT 2: Out of the Shadows is going to be terrible or not.  I’ve gone on record as hating the first Paramount TMNT film, but I figure the sequel can’t be any worse.  I mean, that would be impossible, right?

IDW’s Bebop and Rocksteady beat all the other revival versions to the punch, debuting ahead of the Nickelodeon cartoon and Paramount film versions.  So we’ve had more time to get to know these versions of the characters and thus far I’ve really, really liked them.  The various IDW writers have struck this great balance of terrifying ferocity and dunderheaded lovability you have to read to appreciate.  They do awful, horrible things such as slaughter people (and Donatello), but they still have that childish, immature sense of humor that makes them sort of innocent or at least likeable despite their evildoing.

I mean, these versions of Bebop and Rocksteady were essentially downtrodden wannabes who happened to be given boatloads of power.  At the end of the day, all they REALLY want is to belong to something bigger (a gang) and will do anything not to feel rejected.  It’s sad and adorable, at least for a moment, but then they get mad and go on a killing spree and suddenly the gears shift and now they’re horrifying.

I love it; they have these momentary flashes of an intimidating presence, but only when they get angry.  At all other times, they’re followers that can’t get over their own insecurities no matter how powerful they’ve become.  That’s that balance I was talking about; these are BAD guys who have done irredeemable things, but they’re just so damn likeable and maybe even a little bit relatable.

Dustin Weaver, who wrote their full introduction in TMNT Villains Micro-Series #7, returns to the characters he helped shape with this issue (with story input from Ben Bates).  He dredges up gags he introduced in their origin story, such as their love of music-based gang names (“Reggaeton” doesn’t appreciate the nickname) as well as their aforementioned insecurities over being rejected by a gang.  Waltz hadn’t really done much with those large and small aspects in the ongoing, but he didn’t actually need to.  In the ongoing, Bebop and Rocksteady were part of the Foot Clan and living the life they always dreamed of, so of course they wouldn’t need to go on about feeling left out or unappreciated.  So reintroducing the thread in this issue, that picks up after their dismissal from the Foot Clan, seems entirely organic.  They hit the big time once and now they’re at rock bottom.

But the Turtles and Renet?  Yeah, they sort of stop the issue DEAD.

Time travel is naturally confusing and irritating in comics and media that persists in using it.  The whole “time travel makes my head hurt” thing has become a worn-out cliché at this point.  So when pages and pages of dialogue are used up on Renet yammering on about alternate versions of the Turtles she’s met as well as chronal inconsistencies due to age variations and what the fuck ever kind of paradoxes we’re getting into… It’s exhaustively verbose and not half as clever as I think it was meant to be.  Yes, time travel is a lot of contradictory nonsense, but did we really need to spend so much time talking about it?

I suppose the big take away here is that Renet is a singularity; there is only one Renet in all of the TMNT multiverse.  That means the Renet who showed up in the Mirage comics, the 4Kids cartoon, the IDW comics and the Nickelodeon cartoon are all the same person with only a single timeline.  She just, uh, HAPPENS to endure strikingly similar versions of the same event over and over again (sometimes with Cerebus, sometimes without).  The monotony must be killing her.

It also means we’ve got an actual honest-to-Eastman crossover between the IDW and Mirage comics on our hands (technically, Renet’s previous IDW appearances were crossovers, but we didn’t know it at the time).  The Mirage TMNT make a brief appearance in the opening recap and Savanti Romero looks to be playing a part in this tale (he’s also a singularity, so it’s the same Romero from Mirage… and 4Kids and Nickelodeon, I guess).

So that’s all a bit exciting, right?  Even when it’s buried under four pages of prattle about how time travel is nonlinear and confusing.

This first issue, for whatever reason, features four different artists across 20 pages.  I’ll throw in the towel and confess that I don't know why they went that route (besides "deadlines"), but I’ll concede that all the artists are great so it doesn’t really matter.

Campbell draws the opening recaps featuring the Mirage TMNT and it’s a nice re-rendering of those events from Tales #7 (loved the black and white with red highlights, too).  Campbell’s afro-mohawk hybrid on Bebop takes a little getting used to, though.

Dustin Weaver pitches in for all the scenes at the Natural History Museum and his style has a cartoony expressiveness to it without being overly stylized to get the effect.  I like it; his exaggerated moments have more impact when the characters aren’t wild-taking in every panel.

Ben Bates returns to offer us all the pages of Bebop and Rocksteady in Rio, from their battle against Reggaeton’s war-bots through their rematch with the Turtles.  Bates also drew Villains Micro #7, so it was fitting that he’d come back for this Bebop and Rocksteady mini.  His take on the characters meld that humor and horror dynamic the best.  I mean, there’s a page where Bebop and Rocksteady are walking down the streets drenched in human blood and riddled with bullet holes, but their reactions are hilarious as they sulk, rant and chuckle from panel to panel.  He captures the scary/goofy juxtaposition better than anyone else to touch them so far.

Lastly, newcomer Giannis Milogiannis pops in for the final pages set in circa 2000 New York City.  It’s a short sequence with not a lot going on visually, so Milogiannis doesn’t leave much of an impression yet.  I dunno; if the artist sticks around for the next issue maybe I’ll get a better feel for their style.  It still looks good, don’t misunderstand me, it just isn’t much to go on for now.

I think this issue is setting up a very wild fly-by-the-seat-of-your-pants story starring two loveable psycho juggernauts.  As an introduction, it maybe fails to blend its action and exposition very gracefully.  I didn’t even mention the part where Bebop and Rocksteady spontaneously mumble “Oh yeah, we have that guy’s Time Scepter” at the halfway point of the issue; a lethal example of an awkwardly expository conversation.

All that being said, it’s a crazy comic with a lot of great talent and plenty of surprises.  I’m interested in seeing where it goes, especially if it fulfills its promise of having Bebop and Rocksteady blunder their way through time and space.  It ought to be fun.

(UPDATE FROM THE FUTURE: Ah, whatever; I decided to review Out of the Shadows anyway.)