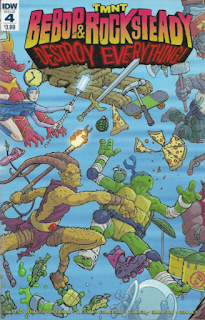 Traversing the time tunnels in their cruiser, the human Bebop and Rocksteady and the mutant Bebop and Rocksteady begin blaming each other for the fiasco at Stockgen.  Since each pair has a time scepter now, they decide to go their own separate ways.  Human and mutant Rocksteady abandon the cruiser while human and mutant Bebop search for adventure elsewhere. (Unbeknownst to them, Anchovy has stowed away and falls out of the cruiser, into the time tunnels.) 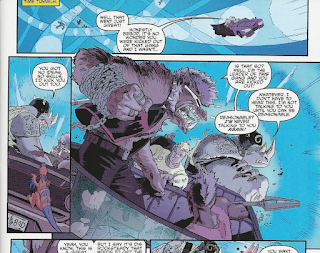 Verdun, France.  1916.  The Rocksteadies wind up in the trenches of World War I and are immediately attacked by the French.  They seek shelter in a German trench and use the nearby weapons to fend the French off.  As they do, mutant Rocksteady tells his younger human self about the time Bebop was kicked out of their old gang and he wasn’t.  It didn’t turn out well for Rocksteady, who was kicked out shortly afterward and had to go back to his ex-girlfriend (Stacy Two) until he could make amends with Bebop. Just then, a shell explodes and mortally wounds human Rocksteady.  Dying, he tells his mutant self that he should find Bebop and make things right, as they really are best friends.  Another portal then opens and out pops one of the Rocksteadies from Stockgen, still being pursued by Rock Soldiers.  Rocksteady ditches his double and travels through another portal in search of Bebop.

Somewhere on Earth.  2110.  The Bebops drown their sorrows in alcohol at a bar populated by aliens.  The Darm’V Enforcers, Utroms, then approach the Bebops and demand they hand over their unauthorized dimensional portal device.  The Bebops then begin stepping over each other’s lines, trying to prove who is smarter or snarkier (much to each other's irritation).  They run from the Enforcers and escape in their cruiser, further annoying each other as they fight over the best directions around a city full of Technodromes. 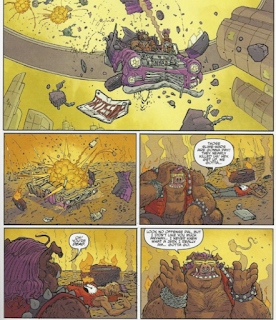 They’re about to escape through a portal when another portal opens and they’re rear-ended by the cruiser of a different Bebop and Rocksteady.  This sends them flying off an overpass and into a fiery wreck below.  Mutant Bebop survives, but human Bebop perishes.  Bebop shrugs it off, at last realizing how obnoxious he can be now that he’s spent time with himself.  He opens a portal to try and find Rocksteady and apologize.

What follows is a rapid-fire tour through time and space where Bebop and Rocksteady fuck everything up along the way.

Stockgen in 2012: He accidentally knocks a Bebop and Rocksteady into a vat of mutagen, combining them into a hideous beast.  As he escapes, Angleron pursues him.

Kennedy Space Center, Florida in 1969: He latches onto the Apollo 11 during takeoff with Angleron attacking him.  He kicks Angleron off and then opens a portal and takes the whole rocket through it.

One Million B.C.: He and the rocket crash into a herd of wooly mammoths.

Some point during the Crusades: He brings a bunch of Bebop and Rocksteadies, as well as Angerlon, Wingnut and Screwloose, to a castle where he finally gives up his search.

Stockgen in 2012: He’s bothered by the Bebop/Rocksteady hybrid and leaves.

Florence, Italy in 1490: He’s attacked by Slash who is quickly clobbered by a cruiser, which appears through a portal loaded with alternate Bebops and Rocksteadies.

A temple, unknown time and place: A cult known as the Creeps welcomes the return of their god, the Bopp-ed One (though they wonder the Rock-ed One is).  They ask Bebop to help them defeat the Seahorse Men, but Bebop shoves them away and continues through another portal.  A new portal opens up and the Bebop/Rocksteady hybrid attacks the Creeps.

Stockgen in an alternate 2012: He arrives in a shack town populated entirely by Bebops and Rocksteadies, who all try to steal his time scepter.

Outside of time, in the 79th Dimension: The Turtles and Renet watch on a monitor as an infinite number of Bebops and Rocksteadies completely obliterate time itself.

*This issue was originally published with 2 variant covers: Regular Cover by Pitarra and Garland, and Subscription Cover by Ben Bates.

The other day I was reading a pretty good interview with co-plotter and artist Ben Bates about this miniseries.  In it, he’s asked if he thinks the plot is too hard to follow with all the time travelling and alternate universes and such.  Bates’ response is: “Who cares?”

From the getgo, I don’t think this was intended to be some sort of coherent narrative where you follow several branching threads full of meaningful events.  It’s just an excuse for a bunch of artists and a couple of writers to go nuts and do something crazy.

I’d liken it to a jam session.  It’s disharmonic for sure, but not really meant to be anything else.  You’re just supposed to go with the flow and have a good time.  And I’m having a good time with this one.

With this penultimate issue, the miniseries is reaching what looks like the crescendo of insanity, with alternate Bebops and Rocksteadies running roughshod over time and space.  By the end there’s so many of them that they populate a whole shack town.  Admittedly, I’ve seen that sort of thing before in other time travel parody stories.  The whole “what happens to all your alternate selves when you travel through time too much?” thing.  I remember Frankenhole did one, where the entire planet gets overrun by Ron Howards that can’t stop raping each other.  An Adult Swim classic!

But hey, I think I’ve seen everything at least once before.  But this is the first time I’ve seen it done with BEBOP & ROCKSTEADY!  I’d read a variation of just about anything if it featured them in the lead.

Along the way, Bates and Weaver drop some bits of characterization and back story for the characters that I’d never considered before.  So Rocksteady has a military background, having been in the army (it was referenced briefly an issue or two ago but given more dialogue here).  Bebop, meanwhile, has always been a ne’er-do-well and grew up on the streets.

It’s funny, because it feels like characterization gleaned entirely from just looking at the details of their old Playmates action figures.  Rocksteady always had this military vibe to him, with the helmet and the camo-pants and the machinegun, while Bebop was of course a “gangbanger” with his shades and chains and mohawk.  In a lot of cases with those old Playmates toys, the action figures were designed first (usually a formula of: Anthropomorphic Animal + Silly Outfit/Gimmick) and then issued personalities somewhere down the line.  Sometimes the fiction would implement the toys in ways that seemed counterintuitive to their design gimmick.  So we wound up with a pilot-themed duck (Ace Duck) as either a pro wrestler (Archie comics) or TV character (Fred Wolf cartoon).  Or, in Rocksteady’s case, a military-themed character as a gangbanger. 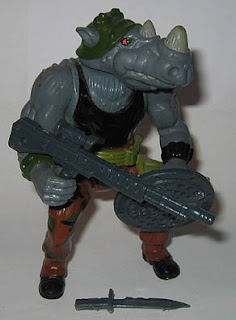 I mean, it happened to me all the time.  I’d get a new toy for Christmas or a Birthday and develop a whole personality around it going strictly by looks or what little was written on the back of the packaging (if there was anything at all).  Then that character would show up in the comic or cartoon and be completely different from what I had been imagining.

I’m not really sure where I was going with this anymore, but maybe my original point was that it never dawned on me that Rocksteady was one of those cases; a character designed to be one thing but then implemented in fiction as something completely different.  I guess I was so used to him as a bumbling stooge and gang member that I’d forgotten he was originally designed to be an army guy.

And so it was interesting to see Bates/Weaver bring it up and work it into his back story for the IDW universe.  Likewise, Bebop was designed with a gangbanger look and was implemented as such in fiction, so they didn’t have to harmonize any conflicting portrayals, but they did something different.  They called out the fact that he was a punk from the start, “growing up on the streets”, and then used that with Rocksteady’s military background to sow a brief conflict between them.

It’s nicely done, adding some substance to this miniseries that’s been fun but maybe a little shallow thus far.  My summary doesn’t do the pacing justice; I had to coordinate everything by location if only to reduce paragraphs (the issue is a ton of back and forth, but the scripting makes it seem natural and the one-page rotations between the characters wind up complementing each other as they both go through identical crises of emotions).

As far as the art goes, this installment has the most hands at work yet.  I’ve already talked about Weaver and Couceira from past issues, but new to the mini is Tiesma, Tunica, Galusha, Conley, Browne and kinda-sorta Pitarra (he’s been doing the covers, but these are his first interiors).  Look, they’re all good, okay?  And they’re each assigned different eras so the transitions seem appropriate.  What you might notice is that the outfits, hairstyles and other details change on Bebop and Rocksteady between artists/timelines.  While in the past that’s been a little distracting (I remember people bringing it up in TMNT/Ghostbusters when all the Turtles had different accessories between art shifts), it works just fine for this mini.  Time and reality are bending and warping as part of the narrative, so who cares if Bebop’s mohawk loses and regains its lift between portal trips?

Some of the artists have a style that stand out more than others.  I think the one that’ll catch everyone’s eye is Pablo Tunica, who did the sequence set in Italy.  It’s more distorted than any of the other styles (some of which seem like they’re trying to stay consistent with each other, like they didn’t get the message that they could go off the rails and do their own thing).  There’s something about his Bebop, with the elongated snout; it reminds me of Richard Corben.  Like, if Corben ever drew Bebop, that’s what he’d look like (Corben has done several TMNT comics in the past, but none of them including Bebop).

There’s one issue left and then this mini will be behind us.  It’s been a fun month; having at least one new Turtle comic every week in a serialized fashion.  I think when I reviewed TMNT #59 and commented on the slow pacing, it might have been in reaction to reading these Bebop & Rocksteady issues simultaneously.  ANYTHING seems slow and plodding when compared to THIS.