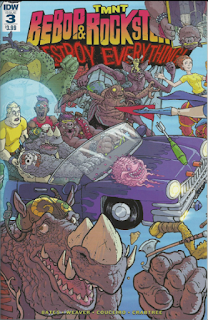 Rio. Michelangelo asks Renet to explain what all those sets of Bebop and Rocksteadies were doing together and why they aren’t in the same dimension as Savanti Romero even though they’re in the same time.  Renet tells them that they’ve created a T.T Alter-Stream, a very rare alternate timeline.  Donatello then explains in 21st century lingo that before they could return to the present from the Cretaceous era, Bebop and Rocksteady traveled to an earlier point and messed up the time stream.  As a result, Savanti (who was ahead of them) returned to the original timeline, but they’re stuck in a slightly alternate one (Savanti, meanwhile, prepares to recruit Bebop and Rocksteady as his minions).

The only way to fix things is to get to Bebop and Rocksteady at the earlier point they returned to, which happens to be 2012… at a place called Stockgen. 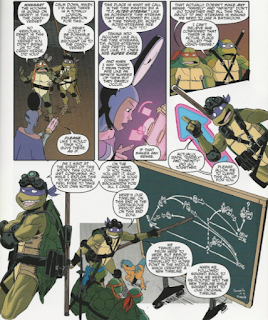 2012, Stockgen.  SWAT teams surround the building as Bebop and Rocksteady and their human selves slaughter scientists (Baxter Stockman among them) in search of mutagen.  April, Lindsey and Chet attempt to sneak out with the turtle specimens, only to encounter the TMNT and Renet, who have just arrived through a portal.

The Turtles and the bad guys get into a fight and Chet is damaged in the chaos, revealing his identity as the Fugitoid.  Renet charges April with escaping with the turtle specimens and Anchovy (the baby raptor).  Bebop and Rocksteady order their human selves to keep the Turtles busy while they find the mutagen. 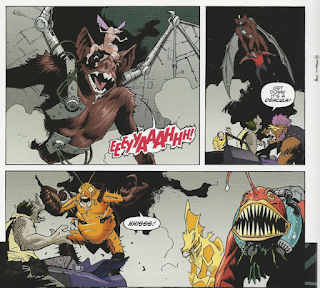 They find some in a storage room, but as soon as they do, another portal opens up and out pops another cruiser loaded with a mutant Bebop and Rocksteady and a human Bebop and Rocksteady (who think they’re in Vegas).  They crash into some containment pods, releasing Slash, a mutant bat (Wingnut), a mutant mosquito (Screwloose), a mutant cockroach (Scumbug), a mutant seahorse (Soakorr) and a mutant angler fish (Angleron).

And then the fight REALLY gets out of control.  A portal opens and an army of Rock Soldiers charge in, determined to salvage the ooze for General Krang.  Just then, the SWAT guys decide to make their move and charge into the building.  Pepperoni also arrives through the time slip she was lost in and Raphael is happily reunited with her.  Unfortunately, in all the chaos, the mutagen canisters spill all over various SWAT guys, Rock Soldiers and even April, mutating them into hideous freaks rather than cool animals.

Angered by all the crowding, Bebop and Rocksteady use their time scepters (they now have two thanks to their set of alternate timeline duplicates) to open several portals.  They begin shoving everyone into the portals, including the scientist who was working on the sea mutants, April and Fugitoid.  Eventually, they pile into the cruiser with their human selves and decide to cut and run, escaping into another portal (stepping on and killing Splinter, still a rat, in their haste).

Renet is mortified.  Everything is too messed up for her to even begin fixing.  With no alternative, she opens a portal and takes the Turtles to the one place where she might be able to set the time stream right: The 79th Dimension.

*April took care of the turtle specimens and named them in TMNT (IDW) #1.

*Chet was revealed to be the Fugitoid in TMNT Micro-Series #8: Fugitoid.

*Slash was released from his containment pod (though the other pods remained undisturbed) in TMNT Micro-Series #7: April.

*You all certainly know who Wingnut, Screwloose and Scumbug are.  Soakorr and Angleron, however, are super fucking obscure, existing only as concept art for a Mighty Mutanimals cartoon that was never produced.

*This issue was originally published with 2 variant covers: Regular Cover by Nick Pitarra and Michael Garland, and Subscription Cover by Couceiro.

Man, I’m loving the insanity of this whole miniseries.  I know I’ve said that before, but it bears repeating.

The irreverent attitude is probably the best part.  I mean, it’s not like we, as the jaded readership, don’t already KNOW that things will eventually be restored to the status quo by mini’s end.  What, Bebop and Rocksteady are just going to eliminate the time stream as we know it and IDW will be forced to cancel all their TMNT titles as a consequence?  C’mon.

And because of that, this mini has the freedom to go balls to the wall and just do whatever the fuck it wants to do.  Maybe everything will be reset at the end and maybe some events will have consequences, but we’re getting to have a metric ton of fun along the way.

The irreverent attitude I mentioned crops up not just in the spontaneous weirdness of the action, but in how all the characters are behaving.  I might have failed to mention it thus far, but the series has had these little moments where it’s revealed that Donatello is the host, explaining plot points and talking directly to the audience.  It breaks the Fourth Wall, something IDW’s Turtle books don’t ever do, but in the case of this miniseries it feels appropriate.

Ben Bates gets really cartoony with his opening 3 pages, squashing and stretching it up with his character expressions.  It might not be a good fit in other IDW TMNT stories (he didn’t utilize them to this extent during his stints on the ongoing or other minis), but again, it feels appropriate here.  This comic is just plain SILLY so get as cartoony as you please.

Damien Couceiro takes over for the rest of the issue after that and he nails all the chaos of the story.  Two sets of Bebop and Rocksteadies arguing and fighting amongst each other, then FOUR sets of them, a ton of mutants, Rock Soldiers, SWAT guys, the Turtles, Renet, scientists, baby dinosaurs… It’s hectic and it’s goofy and he doesn’t disappoint.

With so much action going on, his panels are packed, but packed with stuff to look for.  There’s something spectacular about Bebop attaching his chainsaw to a chain and then swinging it around in circles over his head.

And Weaver finds all sorts of ways in his script to maintain that balance of “terrible monsters who mercilessly murder people” with “aw, I can’t stay mad at YOU” characterization that defines Bebop and Rocksteady.  Little things like their referring to shuriken as “knife stars” or Wingnut as "a Dracula" (not "Dracula", but "A Dracula").  It’s right on the money.

As I mentioned earlier, I don’t know how much of this miniseries is going to “count” when it finally concludes.  Will Wingnut and the others still exist in IDW continuity or will things be reset and they’ll be returned to their containment pods (where they were presumably killed before when Hob blew up Stockgen)?  That scientist who created the sea mutants and got thrown into a portal with them, he isn’t named but I dunno.  Maybe he’s Ray Fillet, who has already been appearing in Mutanimals-related stories in the ongoing and minis?  Beats me. 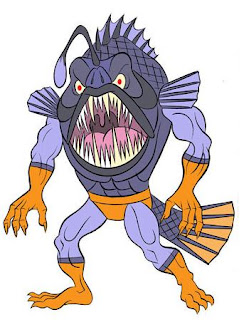 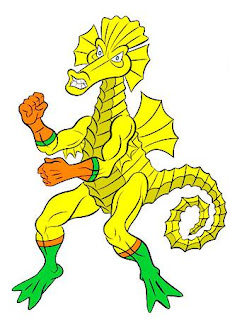 I’m honestly not sure if you can get more obscure than that.