Tea-Time for a Turtle, Part 2 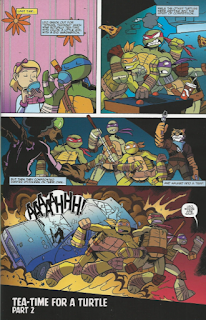 In the alley, Tiger Claw and Baxter Stockman have the Turtles pinned while Donatello continues to try and reach Leonardo on the T-phone.  At Chloe's, Leo eventually decides to pick-up and gets a rundown of the danger his brothers are in.  He cuts tea-time short and puts a protesting Chloe to bed, but not before making her promise not to follow him.  She promises, but with her fingers crossed. 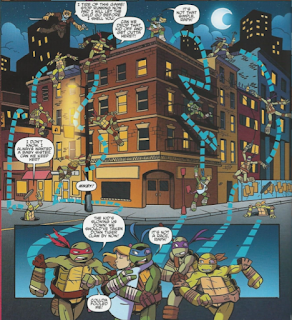 Leo arrives at the fight and manages to shove Stockman into the path of Tiger Claw's ice beam, freezing him.  Tiger Claw then draws his machete and charges the Turtles, only to have the battle interrupted by Chloe, who of course followed Leo.  The Turtles try to whisk Chloe to safety as Tiger Claw pursues them.

They take shelter in a nearby park and hide behind a bench.  The Turtles are out of ideas on how to stop Tiger Claw while also protecting a little girl.  Chloe says she's tired of playing "tag" with the "kitty" and asks if they can go swimming in the fountain, instead.  This gives Leo an idea.

As Tiger Claw prowls the park, he spots Chloe playing in the fountain.  He leaps into the fountain to take her hostage, but Michelangelo swoops in at the last second and grabs her.  As Tiger Claw lands in the water, Raphael damages his jetpack, making it explode and soak him in a geyser of water.  A well-thrown shuriken then damages his ice gun, causing it to also explode and freeze him along with the water in the fountain.  The Turtles then triumphantly take Chloe home. 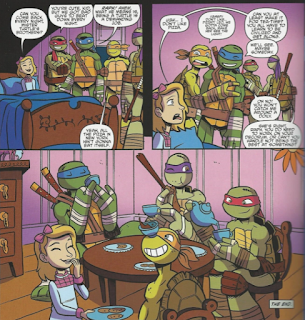 At Chloe's place, her father peeks in to check up on her and finds her sleeping soundly in bed.  When he closes the door, the Turtles emerge from the darkness to bid Chloe good night.  She asks if they can stay for one more tea party, especially Raph, whom she thinks is in desperate need of being civilized.  The Turtles agree to stay a little longer.

*This story is continued from "Tea-Time for a Turtle, Part 1".

I can't really think of anything more substantial to say about this story.  Just that it was cute.  Admittedly, what could have been a very obnoxious script was ultimately salvaged by Chad Thomas's art, as he infuses it with cartoonish pep and makes Chloe adorable when the writing is very clearly calling for her to be bratty.  Under another artist, this might not have been an enjoyable two-parter at all.

There are some inconsistencies and errors in this half of the story; you might notice some and you might not.  Breckel can't seem to decide whether Chloe's lips should be colored skin tone or if they should be colored like lipstick.  Lee attributes a dialogue box to Tiger Claw that was meant for Chloe, so at one point in the story it seems like Tiger Claw is playing tag with himself.

And then there's the labored set up with the ice gun, acting like it was vital to not only get Tiger Claw in the fountain but to also get him completely soaked, otherwise the exploding ice gun wouldn't freeze him.  But then, just a few pages earlier, the ice gun was capable of freezing Stockman into a perfect ice cube without the need of an outside water source, so all they really needed to do was make the gun malfunction.  All that stuff with the fountain was unnecessary.

But I dunno, I'm kind of nitpicking a very simple story that was meant to be cute first and coherent second.  Some might raise an eyebrow about four teenage boys sneaking into a little girl's bedroom in the dead of night to play with her, warning her to be quiet lest she wake her father, but let's all just pretend this is innocent fun and leave the horrors of our sick reality behind us for 12 pages.