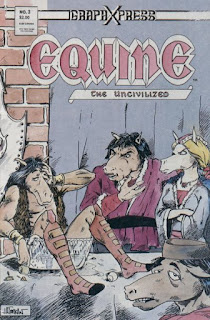 "The Return of the Princess"

Oh god, are the Turtles actually in this thing?

Alright, long story short is that Equine checks out a banquet and tries to distract everyone with his antics.  All the guests at the banquet are anthropomorphic animals and among them are the Teenage Mutant Ninja Turtles.  The Turtles join Equine in a dagger-throwing contest and I die a little inside.

*The TMNT appeared with permission in this issue, making it a legal cameo and not just a gag.  They'll appear again in Equine the Uncivilized #6.

*This issue also featured fan art and a bonus pin-up.

I thought I'd covered all the legit cameos the TMNT made in black 'n white indie comics from the '80s, but then THIS garbage rears its ugly head.  Special thanks go to Tokka and his substantial Flickr account for cluing me in.

Of all the indie books the Turtles cameoed in, this is one of the least attractive.  The art's very amateurish, the characters are boring and the jokes aren't very funny.  Their appearance in this issue is extremely minimal; just Easter egg crowd fillers.

They'll have a larger presence in issue #6, which is a jam session issue featuring guest art from a bunch of different creators (including Eastman and Laird).  That one's of greater note for that reason alone.  But this?  This cost me $.50.  And I'm not happy about it.