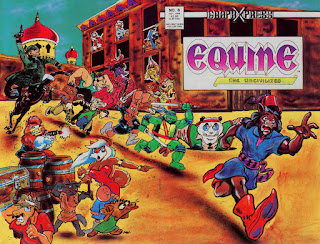 In this jam session issue, Equine decides to use his powers to invite every anthropomorphic indie comics character he can think of to a party.  A whole host of critters (all drawn by their creators) appear and party down, but Equine soon finds that he's kicked out of his own shindig. 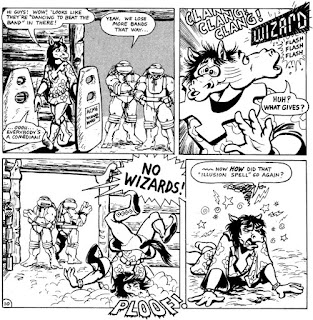 Equine tries to infiltrate the get-together under numerous guises, but is kicked to the curb on all occasions by the Teenage Mutant Ninja Turtles, who are working the door as bouncers.

*The Turtles as they appear in this issue are drawn by Eastman and Laird.

*Among the guest characters featured in this issue are two whom have had previous/future crossover experience with the TMNT brand: Stan Sakai's Miyamoto Usagi/Usagi Yojimbo, and Dave Garcia and Monica Sharp's Panda Khan.

*This issue also featured a bonus pin-up of all the characters partying, each drawn by their creator.  Two of the Turtles feature in the pin-up, trying to steal hors d'oeuvres off a platter without being seen.

Thanks again go to Tokka and his Flickr account for cluing me into this obscure cameo.  Jeez, just how many indie comics DID the Turtles guest appear in back in the day?  Those guys got around.

This issue of Equine the Uncivilized is full of the same lame gags as the previous one I reviewed, but the gimmick makes it worth picking up.  It's an "art jam" issue, full of guest characters from other indie titles, all drawn by their respective creators.  Fact of the matter is I didn't recognize ANY of them aside from Usagi, Panda Khan and (of course) the Turtles.

Funny thing about Panda Khan.  This is the only time, so far as I know, that he appeared in a comic book with the Ninja Turtles.  And that's despite getting his own action figure in the Playmates TMNT toyline. 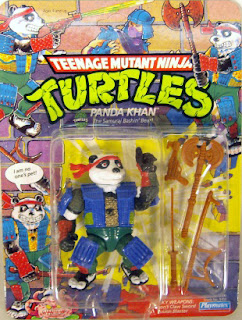 Panda Khan was one of only two "guest stars" in the Playmates line who were licensed from other indie comics (the other being Usagi Yojimbo/Space Usagi).  But whereas Usagi crossed over with the Turtles all the freakin' time in comics and cartoons, Panda Khan never met them... Beyond appearing in a crowd shot while putting in a cameo in this incredibly obscure indie comic.

So for that novelty alone, I suppose Equine the Uncivilized #6 has it's place in TMNT brand history.  I mean, it's still a footnote, but a slightly more important footnote than it otherwise ought to be?  Eh.  That's pushin' it.