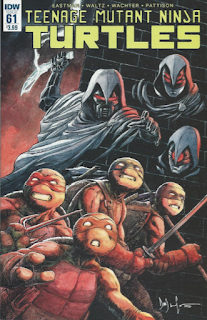 The Street Phantoms (Jammer, Maze and Turk) spot a van in an alley and decide to knock it over for the goodies inside.  Much to their surprise, it’s a trap set up by Donatello and Nobody, who are using Harold’s new upgrades to counter the intangibility cloaks of the Street Phantoms.  The thugs aren’t without a few tricks of their own and knock out Angel’s Nobody suit and Donnie’s electronic staff with an EMP gun.  Both groups disperse as soon as they hear police sirens. 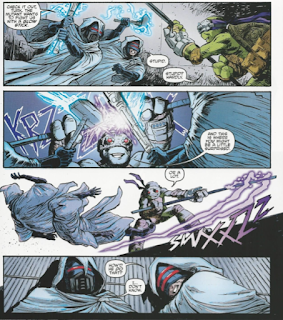 At Foot HQ, Leonardo and Jennika spar in a kendo match, with Jennika showing improvement.  She’s upset about letting Alopex get away, but Leo compliments her for going easy on Alopex in a life-or-death struggle, recognizing that Alopex wasn’t in her own mind.  Jennika then asks Leo to call her “Jenny” from now on.

Later, Splinter calls a meeting with his sons, April, Casey, Angel and Jennika.  Michelangelo shows up with pizza courtesy of Woody and they get down to business.  Splinter and April lay out everything they know about the Pantheon, with April hopeful that Aka is truly a benevolent creature.  More so, she hopes that perhaps there are more secrets hidden in Dr. Miller’s scroll that they can use.  Splinter charges April with researching further spells and countermeasures against Kitsune, the Rat King and any other malevolent members of the Pantheon.

All Raphael cares about is tracking down Alopex; a sentiment Angel echoes.  April reveals that when the Foot were experimenting on Alopex, they GPS chipped her.  April says she’s heading northwest and Angel concludes that she’s heading back to Alaska where she once lived as a normal fox.  Splinter charges Raph and Angel with bringing Alopex home.

The next order of business comes to Donnie and his dealings with the Street Phantoms.  The EMP gun proves that they have some serious backers and Splinter reveals that Jennika may know a thing or two about that.  Back when she went rogue, she met with Darius Dun, a mysterious businessman who was employing and arming the Street Phantoms for his own ends.  Splinter charges Donatello with further enhancing their technical arsenal (with Harold’s help) and looking into the origins of Darius Dun. 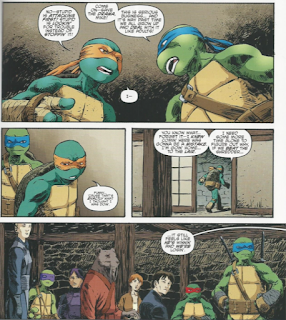 Mikey finally speaks up, having only agreed to join the meeting because he thought it would be a family gathering.  He doesn’t care for Splinter’s warlord-like disposition, referring to people as assets and seemingly caring only for their strategic value.  Leo tells Mikey to grow up and get with the program.  Mikey storms out, but suggests that considering the way everyone has changed, the Shredder may have actually won after all.

Splinter dismisses the council, but asks Casey to come walk with him in private.  They tour the garden and make small talk, but Casey eventually asks if Splinter regrets killing the Shredder.  Splinter laments that Oroku Saki was like a brother to him, but ultimately he had to think of the greater good and the safety of his family.  As such he doesn’t regret what he did.  Casey sums it up as “a dirty job, but somebody’s got to do it”.  Splinter concurs and then tells Casey that such a job is why he wanted to speak with him privately… 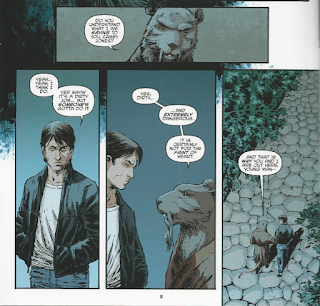 At Harold’s lab, the scientist is dissecting one of the Street Phantom cloaks and cursing the woman who stole the technology from him.  He’s suddenly tazed in the back by Jammer, who remarks that “the inventor” says hello.

So, you can tell that this issue will be the opening chapter in a trade paperback, right?  The first half is all about bringing the reader up to speed on current affairs and the second half is all about laying the new plot threads out and sending the characters off down their own story arcs.  This is one of those “jumping-on point” issues.

So I suppose your enjoyment of the story will come entirely from your POV and how you’re reading the comic.  If you’re brand new to the title, then all the exposition and recapping will seem like a blessing.  If you follow the series exclusively via trades, then it’s probably been a few months since you read the last one and you appreciate the refresher course.  And if you’re keeping up with this book on a monthly basis through the floppies… It’s a snoozefest, yeah.

Waltz tries to make the real-world purpose of the “jumping-on point” narrative feel organic to the ongoing story, implementing the “boardroom meeting” gimmick.  It certainly works in a utilitarian sort of way, though it's far more tactful than I might be making it out to be.  Splinter starts with Old Business (the recap) and then moves on to New Business (setting up the next few story arcs).  It’s a neat trick, but the kind of thing you can only get away with once.

Despite it being a catch-up issue, the character work remains solid throughout.  Mikey hasn’t given up on his decision to stay out of the Foot Clan and I’m glad to see that angle hasn’t been dropped after the past half-year of him teaming up with his siblings.  Mikey’s made it clear that his position is a matter of principle and that would lose some impact if he gave up on his principles so quickly.  I’m not sure where they’re going to ultimately take this, though one side will eventually have to cave to the other.  Either Mikey joins the Foot or the Turtles quit the Foot and go home to Mikey; whichever it comes down to, the story ought to be good.

The Street Phantoms get the most play in this issue, so far as New Business is concerned.  Not a whole lot of development, but maybe we’re positioned to finally learn more about Harold’s mysterious ex-partner.  Was that identity dropped on the last page, “the inventor”, supposed to be a proper noun (like the character is named The Inventor) or just a cryptic description of the so-far-unseen character’s interests?  I guess we’ll have to wait and see.

Wachter’s doing great work on the art.  He doesn’t cartoon the facial expressions of the characters as much as Santolouco or Smith do, so his aesthetic strikes a more serious-looking tone.  It’s fitting for this issue, which is all about characters sitting at a round table and talking about doing stuff.  With the Turtles, their eyes are smaller and there’s a heaviness to their brows that kinda makes them all look weary.  I think the dark-circled, saggy eyed look fits perfectly, considering they just finished a marathon battle against Leatherhead, Rock Soldiers, Kitsune, Foot Soldiers and each other.  You’d look like shit, too.

Ultimately, this issue read like something you’d expect to get on Free Comic Book Day.  It’s a recap of what you’ve been missing and a preview of what you’ll get if you buy the comic.  It’s like a sampler or a trailer.  Unfortunately, this comic wasn’t free; it cost $4.  So it’s a little hard to give it two thumbs up on principle.