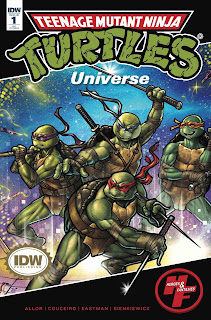 Inside a military van, Agent Bishop preps his Earth Protection Force (EPF) soldiers with a rousing speech about maintaining humanity's hold on the world from the freaks who have recently come forward to try and take it.  Detective Lewis, NYPD liaison to the EPF, is not impressed.  Colonel Knight then sends out several floating drones which proceed to track a female scorpion mutant to T.C.R.I. Laboratory #7, a new facility built by Baxter Stockman. 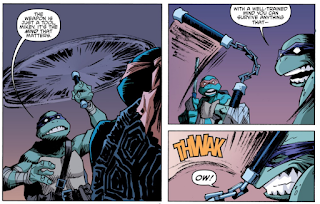 On an adjacent rooftop, the Turtles keep an eye on the place, as April has gone in to try and play Stockman for whatever she can get from him (hoping to use his resources in her research on the Pantheon).  Michelangelo notices the floating drone enter the building through a vent shaft and the Turtles decide that something is wrong.

Inside, the scorpion contacts her boss, Madame Null, and reports that she's successfully downloaded the requested data.  Guards then spot her and she mercilessly begins to slaughter them. 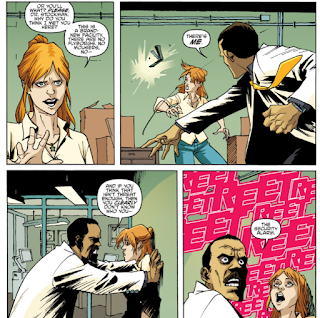 Elsewhere in the facility, April confronts Baxter.  Baxter still remembers her only as a flaky intern with a brilliant father, but April reveals that she knows everything about Baxter, including all his dealings with Krang and the Foot.  April pretends to be on his side, wanting to join with him to stop a new threat that has stepped out of the shadows, but Baxter sees through her ruse.  He threatens to kill her just as the security alarm goes off. 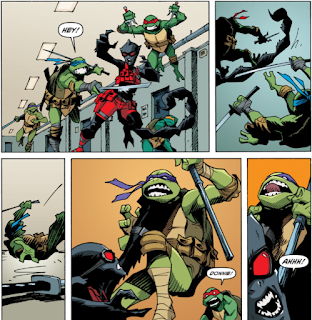 And yet elsewhere, the Turtles attack the drone and Bishop becomes aware of their presence.  The Turtles destroy the drone and bump into the scorpion, who has killed all the guards.  They confront her, but she eludes them and they give chase.  They tackle her through a window and land in front of the building, where numerous EPF soldiers have gathered.  The soldiers open fire with tranquilizer darts, one of which hits Donatello in the neck.  The scorpion escapes back into the building through an upper floor window while the Turtles have to go back in through the entrance, dragging Donnie behind them. 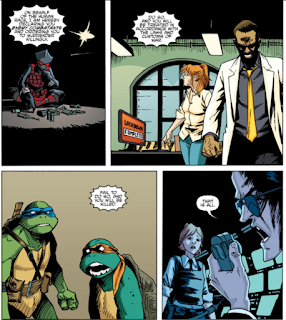 Bishop calls for substantial back-up and then takes to the horn.  He orders all the mutants in the TCRI building to surrender peacefully or they'll be treated as enemy combatants and killed.  Baxter isn't pleased with any of this and leads April into a secret lab where he's been developing weapons for some time.  The scorpion finds one of Leo's discarded swords and takes it for herself.  Meanwhile, Raphael laments that no matter what they do, there are always more enemies.

On a rooftop, Leonardo has been chasing a mysterious ninja for thirteen blocks.  He eventually catches up to him, only to discover he's been led into an ambush.  Leo takes on the numerous ninja with ease until they unleash a giant four-armed samurai monster on him.  Leo chops off one of its arms and then impales it on a chimney pipe. 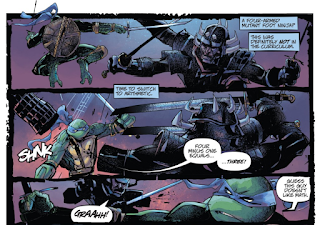 A hulking axe-man then attacks Leo next, but he swiftly kills him with a sword to the chest.  He thinks he's won until he looks up and sees a team of bowmen (apparently Foot Clan, according to their leader) on the high ground, ready to fire.  They unleash a volley of arrows and Leo retreats to the park for cover.

*The story continues in TMNT Universe #2.

*Baxter Stockman snuck away from the Foot Clan in TMNT (IDW) #49 and hasn't been seen since.

TMNT Universe!  I've been excited about this series since it was first announced.  If you read my monthly whining with any frequency, you may have noticed a trend; I tend to "complain" that the IDW universe has more good characters and storylines than it has pages per month to feature them.  What they've been needing for a while is a second ongoing series to help shoulder the burden.

Well, TMNT Universe is that new ongoing series!  My prayers have been answered.

But now we gotta Real Talk.  So, TMNT Universe is going to be an ongoing anthology series consisting of story arcs that supplement the main ongoing series but don't chronologically follow each other (hopping around between characters and settings).  We already had something like that in the form of those TMNT spin-off miniseries that were published one right after the other.  Add all those up and in a way we just finished a 44-issue ongoing series.  The only difference between the previous string of miniseries and TMNT Universe is that this time the numbering will be kept track of from one arc to the next.

So maybe it isn't something too terribly new or different, but I'm still glad to have it.  And hey, if we're asking for the moon, maybe we'll get infrequent miniseries in ADDITION to the two ongoing titles?  Eh?  Eh?  I'm never satisfied.  Always wantin' more.

As for the story, this opening arc establishes the tension and stacks the odds immediately; the flow of "bad to worse" situations is masterful in an "Aw they're fucked" sort of way.  You've got Baxter Stockman, the scorpion mutant working for Null (apparently named "Zodi"), and Agent Bishop's EPF all wanting a piece of the Turtles.  If they try to leave the TCRI building, they'll get shot to death.  If they stay inside, they'll have Baxter and the scorpion to deal with.  It's a suspenseful situation and all the pieces fall into place very fluidly from one predicament to the next.

Regarding it's place as the first issue of an ongoing series, the issue does seem designed to both welcome and confuse any potential newcomers.  The continuity is thick in this story and it almost feels like the next story arc in the ongoing, not a first issue of a new book.  That said, the action and conflict is self-contained enough that I think any fresh consumer could still be pulled in even if they don't know who the hell Madame Null is.

Since I've been reading everything published thus far, I'm digging seeing all these plot threads intersect.  You've got April trying to play Baxter for resources to help in her research on the Pantheon, Madame Null from the Mutanimals miniseries resurfacing, and Agent Bishop making his first full appearance (having only made a cliffhanger cameo beforehand).  It's actually a perfect intersection of the Foot Clan (Turtle and Baxter), mutant (Null), alien (Bishop) and supernatural (Pantheon) plot lines, dipping into a little of everything.  In that way, maybe it isn't such a bewildering first encounter for new readers, as the story gives them a taste of everything that's been going on in the main title up until now.

Editor Bobby Curnow has said that the opening Universe arc takes place after TMNT #64, specifically after the Bebop & Rocksteady miniseries (which also took place after #64).  There's only one awkward hurtle to that.  Leo keeps telling Mikey how great it is to have him working with his brothers again and how they should stick together as a team, referencing Mikey's decision not to have anything to do with the Foot Clan and thusly alienating himself from his family in the main series.  Problem is that if this takes place after Bebop & Rocksteady, they've already been working together as a team and a family for at least one big adventure, so why is Leo making such a huge deal about it now?

Then again, these most recent storylines have all been published out of chronological sequence, so I imagine it's easy to overlook stuff like that until you've reassembled them in a timeline and tried reading the finished product all at once.  Being an editor is probably hard.  I wouldn't know.

Character-wise, we're seeing more of Agent Bishop and the bar is set pretty high on him.  He was the best original villain to come out of the 4Kids cartoon and that's a tough act to follow.  So far IDW's take is playing pretty close to his 4Kids counterpart, but we'll see how he turns out.

There's also Detective Lewis, who has been making increasingly more frequent appearances over the past year (after a long absence following her debut).  She's yet to really do anything too substantial as an ally of the Turtles, so maybe there's a chance this storyline will be her big moment.

Then there's "Zodi", the scorpion mutant working for Null.  I like her design, but my favorite moment involving her was a one-panel sequence during the scene where Bishop issues his demands for all the mutants in TCRI to surrender.  She's sitting quietly on the floor with all her resources laid out in front of her, looking over them contemplatively like she's trying to determine how to get out of this mess with nothing other than what's she's got.  It's a single silent panel that speaks volumes to her personality.  Love it when artists slip something in like that.

And speaking of art, Couceiro's is fantastic; IDW's TMNT books always seem to attract great artists.  Couceiro had previously done several pages of the Bebop & Rocksteady miniseries, though it's easy to mix up just which part of the story he did considering how that run was constantly toggling back and forth between artists as a visual gimmick.

With a darker, less comedic storyline, you see a different aspect of Couceiro's lines than what he provided in Bebop & Rocksteady.  His angles are very sharp and his outlines on characters look like they're made of serrated edges.  It's a harsh style, but it fits the overall tension of this plot that has something of a "Die Hard" thing going on.  He totally sells the scene where Baxter tries to threaten April by hurling a stapler at her.  It's petty and small and we all know April could crush Baxter in a physical fight, but Couceiro managed to sell the scene anyway.  What's even more impressive is that he did it not by making April look meek and intimidated, but by making Baxter look genuinely fierce.

The back-up is the first in a serial that will run alongside the main storyline.  What struck me about this one, and the main story too, is just how violent it is.  I think Viacom must be easing up on IDW, because they'd never have shown Leonardo chopping off arms, impaling bad guys and stabbing ninja to death before.  Whatever happened to that whole "no kill policy", I wonder?  Or maybe the four-armed samurai didn't count because he was just a monster, and maybe the axe-man will, uh, get better.  Maybe.

Bill Sienkiewicz is something of a legendary talent and his inclusion on the back-up was a major selling point for this new series.  I know that his style is "divisive", but I've always enjoyed it.  I wouldn't want EVERYONE to draw like Sienkiewicz, but I like him as a change of pace.

Honestly, his pencils and inks seem dialed back from what I usually expect from him; less impressionistic and more straight-forward.  Elektra: Assassin this ain't.  It looks good (except for maybe that foreshortening on the axe-man's arm on page 4) and has a very rough, messy feel that befits the story (which in itself seems like an homage to Mirage's Leonardo micro).

TMNT Universe hits the ground running with a story that wastes no time getting to the action and furthering the plot.  New readers might be confused, especially since this is a first issue, but I think the exposition and plot points were executed in a way that might make them want to see what they missed rather than get overwhelmed and quit.  Let's hope it's the former, because I want this ongoing to last.