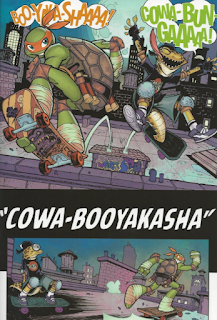 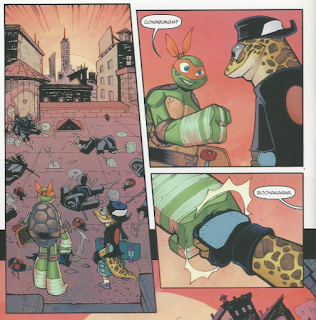 Before things can get too nasty, a unit of Foot Bots attack.  Together, Mikey and Mondo use their skateboarding skills to destroy the robot Foot Soldiers.  As the sun rises, the two friends make amends, fistbumping and calling out the other's catchphrase.

A mostly wordless back-up (all dialogue is in the form of a catchphrase), this is primarily Sommariva's time to shine and his pencils are full of tilted angles and warped geometry and lots of speed.  It's an energetic 8 pages and the characters emote with cartoonish, exaggerated expressions (but not so much the "faux-anime" thing used in the cartoon).  It looks very good, with Rauch's colors adding a sort of plasticky shine to the characters that looks nice on Sommariva's lines.

As for Mondo, he's maybe a little TOO good at fighting Foot Soldiers in this story; the cartoon has made it a running joke that he's terrible at fighting (which I like; not EVERYONE who gets mutated is going to become a fuckin' Ultimate Fighting Champion).  Flynn/Sommariva seem to find a loophole, as all of Mondo's moves involve him smashing the robots with his skateboard or getting an assist from Mikey, and since he's at least been confirmed to be an excellent skateboarder, that remains partially in-character.

But that's about the maximum amount of commentary I can wring from this back-up.