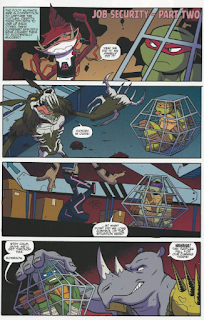 In the warehouse, the Turtles remain caged as the four Foot Mutants brag about their victory.  They bombard one another with compliments and realize that only by working together they were able to finally capture the Turtles. 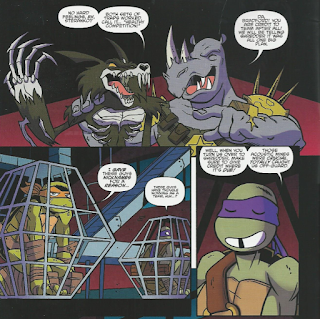 Donatello isn't about to give such a saccharine lesson time to sink in for his enemies and decides to start playing with their heads.  Donnie suggests that it wasn't a combined effort at all that worked, but the acoustic mines planted by Bebop and Rocksteady.  Raphael catches on and argues that it was the cages set out by Rahzar and Fishface that ultimately defeated them.  The two sets of Foot Mutants once again start arguing, debating on who deserves the MOST credit from the Shredder.

Amused, Donnie figures he can make things even worse between the Foot and tells Bebop that he should be using his tech suit to show the others whose boss.  Raph follows, urging Fishface to use his mechanical legs to win the fight.  Michelangelo chimes in and tells Rahzar that because he's been double-mutated, he's twice as strong and should take the others out with ease.  Leonardo is drawing blanks, but Rocksteady feels left out and insists on a pep talk.  Leo hastily suggests that because he fights with two weapons, he should be able to defeat the other mutants who... don't fight with two weapons?  That's good enough for Rocksteady and he enters the fray. 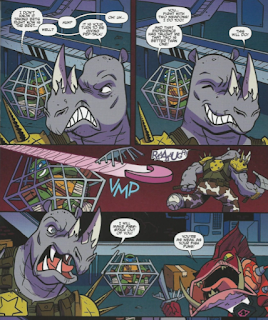 As the Foot Mutants battle, one of Bebop's stray mohawk boomerangs slices Leonardo's cage open.  He quickly frees his brothers and they join in the fight, too, taking down all the evil mutants.  Things look bad for the Foot when suddenly a smoke bomb explodes, a getaway van appears and the Foot Mutants escape to freedom. 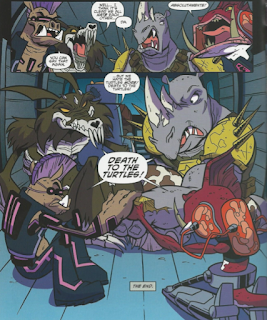 In the back of the van, the sullen Foot Mutants lament their loss and then look to the driver's seat to see who bailed them out.  Much to their shock, it was Tiger Claw!  Bebop gives up, knowing that as soon as Tiger Claw snitches on them to the Shredder, they'll all be executed.  Tiger Claw informs them that he will not be snitching.  As they are all members of the Foot Clan, it is their duty to serve the Shredder and work as a team... even if they don't like each other.  The Foot Mutants agree and compromise that even though they despise one another, they hate the Turtles even more.

*This story is continued from "Job Security, Part 1".

That was a predictable end to the story, leaving me a tad disappointed.  We're left with the revelation that if the Foot Mutants WANTED to, they could easily work as a team and defeat the Turtles.  Unfortunately, they CAN'T work as a team because they're bad guys, so their threat will be forever neutered.

I feel like I've seen this sort of plot in kid's cartoons before; a lesson to illustrate the value of teamwork and all that.  "If you don't get along, you'll be no better than the bad guys who always lose."  That sort of thing.  And, I mean, this is a comic for elementary schoolers so that's fine; teach 'em lessons.  But from a narrative standpoint, there's nothing worse than villains who can't win because they're stupid to a self-defeating degree.

But cliche' a resolution as it was, Flynn's script that got us there was still lots of fun.  He makes the four Foot Mutants out to be as entertaining and lovable as the Ninja Turtles; I could probably read a hundred issues just about them.

The bit where the Turtles use flattery to turn the mutants against each other may have been predictable, but each suggestion is tailored to the personality of each Turtle as well as whatever history they might have with the villain (Donnie is tech savvy and so is this incarnation of Bebop, Raph once had to work with Fishface, Mikey was originally targeted by Rahzar).  The leftovers wind up being Leo and Rocksteady, who have no history together from the cartoon nor any intersecting interests to speak of.  So Flynn plays it off with a gag, as Rocksteady whimpers for a pep talk of his own and Leo has to come up with something hasty and unconvincing.

Anyhow, this was a fun story with a telegraphed resolution.  But while Flynn's plot may not have been anything special, his script contained plenty of funny gags and callbacks and Chad Thomas' pencils were yet again full of energy and humor.  So it's alright.