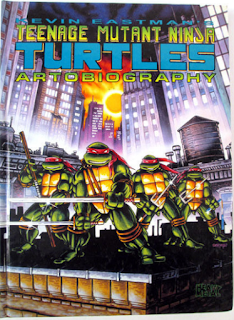 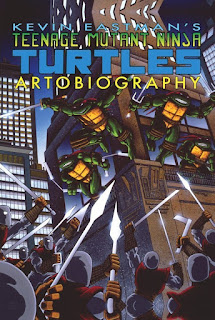 *This hardcover collection was originally published by Heavy Metal in 2002.  It was reprinted in 2013 by IDW Publishing.

*There are minor changes between the editions.  Obviously, they have different covers.  The opening dedication of the Heavy Metal edition included recognition to Julie Strain, Eastman's then-wife.  As they had divorced by the time of IDW's printing, her acknowledgment was removed (though the mention of her almost appearing in the Next Mutation TV series remains).  Brief references to IDW are inserted as asides near the end of the book, acknowledging Eastman's recent collaborations with them on their TMNT series.

Here's something I'd been meaning to get my hands on for some time, but a mixture of exclusivity followed by apathy put the brakes on that.

When the original Heavy Metal printing of Eastman's Artobiography came out, I was still in high school and hadn't started my serious TMNT collecting hobby.  By the time I DID, the book was out of print and going for considerable prices on the aftermarket.  So I forgot about it and moved on to cheaper fare.

Then IDW reprinted it and I was like "FINALLY" and then I was like "I'll get it later" and then I was like "Meh".  Once there was no immediate urgency to buy the book, I lost my enthusiasm for it because I could get it "whenever" (thanks to IDW always keeping it in print).  People like me are the reason why Disney has their "vault" system.  I'm sorry. 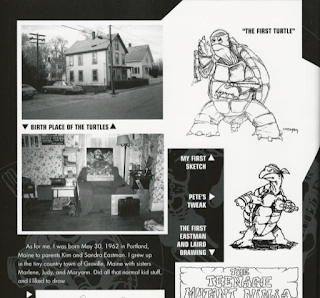 Now that I've got it, though (bought it half-price from a dealer at the Alamo City Comic-Con), I must admit that it's a pretty fuckin' awesome piece of work.  While it's definitely more "art" than "biography", I think that approach was well implied by the portmanteau of the title, and I'm rather glad Eastman favored the visual approach over endless words describing his process.  When you're talking art, it's better to SEE than to READ and this book is absolutely packed with pictures.

On the off-chance you would prefer to read a meticulously detailed account of Eastman's time working on the Teenage Mutant Ninja Turtles brand, as well as other projects, then I implore you to brew a pot of coffee and carve out a day in your calendar to read his interview with The Comics Journal.  It's epic-length, but absolutely unfiltered, discussing all the highs and lows of his career, right down to some scary legal stuff that Viacom would prefer be hidden from view now 'n days.

As for the Artobiography, it's arranged very nicely (in theory, but I'll get to the errors later) with Eastman dividing up his time on the comics in chapters dedicated to each issue of the Mirage series.  Odds and ends are appropriately segregated into Galleries focusing on his painted works and collaborations with other creators, Short Subjects that cover a number of the back-up strips he did, and Sketchbooks that showcase random artwork with no theme tying them together.  It's a clean, chronological approach that periodically breaks up the monotony with those gallery extras.  You won't get fatigue and will probably find yourself reading the whole book in one sitting without realizing it.

The text is mostly in the form of captions giving context to the selected art.  While I would have liked a few more detailed anecdotes, the wistful stories we do get are boiled down to their highlights.  As an example of the brevity, here's Eastman's recollection of what inspired Renet: "Renet was based on this cute, super smart but klutsy young lady who lived next to a studio in Connecticut".  That's it.  Who WAS this young lady who inspired one of the TMNT's longest lived recurring allies?  I guess we'll never know. 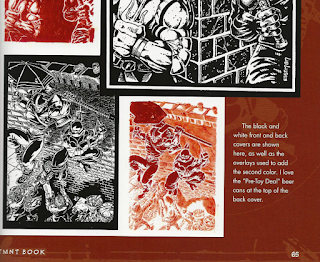 Eastman's voice in the captions is surprisingly humble for something intended to showcase his own achievements.  While he talks about his own substantial contributions, it never comes off like he's bragging, just saying "this is what happened" or "this is how I remember it happening" and never jacking off his own genius or anything.

He gets the MOST colorful when he's describing the work of his collaborators, actually.  Working with folks like Richard Corben, Mark Bode', Dave Sim and of course the entire Mirage crew; he never sells their contributions short and always talks them up (a departure from that Comics Journal interview I linked earlier, where he gets a little nasty about his coworkers).  And Eastman's always careful never to take credit for something someone else has done, delicately citing credit where it's due.  His words come off maybe a bit too measured at times, but again, this never reads like an ego-trip.

Page layout is very nice, aiming to eliminate as much dead space as possible and cram every inch with artwork.  Depending on how much he contributed to a given issue, the chapters are larger or smaller accordingly.  For instance, as he laid out TMNT #10, there is a massive collection of thumbnails included to showcase that issue.  On the flipside, since Donatello #1 was primarily the work of Peter Laird, Eastman instead showcases select pages of Laird's that he really liked and then moves on.

This retrospective is focused on Eastman's work with the Mirage comics, and in that regard it is certainly very thorough.  There are notes on everything from the short strips to the trade paperback collections to the movie adaptation.  However, he doesn't cover much outside of the comics.  So his extensive work on designing toys for the Playmates toyline is absent, his contributions to the live-action films are reduced to interior cover decorations (designs for Kirby the Fifth Turtle who would have appeared in the fourth live-action movie), and his time helping to develop the Ninja Turtles: The Next Mutation TV series are given one page at the very end with only four sketches. 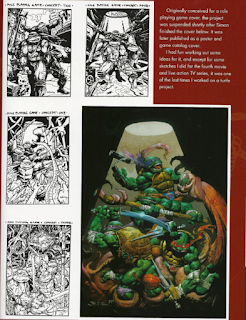 So is it a COMPLETE rundown of everything Eastman ever offered the TMNT franchise?  Of course not.  That would take considerably more than one volume to cover.  But the focus on the comics is appropriate, since that's where the TMNT phenomenon began and that's where Eastman's creative juices really got to flow.

So where did they fuck up?

I own the IDW printing, just FYI, and my understanding is that it is the "corrected" version that Heavy Metal had to rerun.  Apparently, the original Heavy Metal printing had a lot of binding quality issues and even some repeated pages.  They fixed these, but some folks still got stuck with the duds.  Heavy Metal's trade paperback reprint of Bodycount also suffered from repeated pages, so I guess as a publisher they just weren't in a competent place at the time.

The IDW version doesn't have any debilitating errors like that, but some stuff does appear to be out of sequence.  As you probably noticed in the Contents listing, TMNT #8 is wedged between TMNT #11 and TMNT #14.  And TMNT #14 is erroneously referred to as TMNT #8 in the chapter heading.

While the Galleries make for a nice break from the issue retrospectives, Eastman sometimes includes nuggets of history in them that feel like they'd have been better suited in one of the issue chapters.  For instance, while going over his painted covers for the First Comics reprint collections, THAT'S where he drops the origin of the Renet character, not in the chapter about issue #8.  So going back and fact-checking for research purposes can be a little annoying.  But only if you're a Teenage Mutant Ninja Turtles scholar.  And there is no such thing. 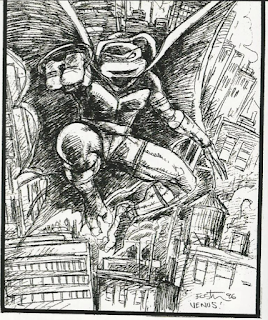 Lastly, I suppose the remaining question is "If I own the Ultimate Edition hardcover collections of the Mirage series that IDW published, is there any point in buying the Artobiography?"

That's a good question.  The Ultimate Edition hardcovers, while not entirely perfect (they use untoned pages for some issues rather than the correct duo-tone versions), those collections are superb and contain extensive retrospectives on each and every issue with annotations by both Eastman AND Laird.  And spread across six volumes, there's more room for material than the Artobiography's 300 pages.  So if you own the Ultimate Editions and then pick the Artobiography up, yes, you're going to run into a lot of repeated material and anecdotes.

However, if you AREN'T looking to take the financial plunge into those Ultimate Editions (no judgment here; I haven't, either), then I think the Artobiography is right for you.  It's a highlighted tour of the TMNT history in its formative years from the perspective of half the creative team.  There's art in here I'd never seen before and much of it actually isn't reprinted in the Ultimate Editions, either (I didn't buy them, but I do have a library card).

If the behind-the-scenes story of the TMNT fascinates you, as well as the creative process that went into it, you'd be hard-pressed to find anything better than this.  It's thorough and, assuming you're getting the IDW edition, very well-made.