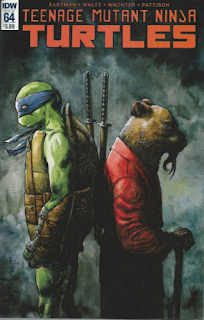 In the alley, the Turtles, Nobody, Casey and the Purple Dragons take down Lupo and his mob.  Raph asks what Casey’s doing with the Dragons and Casey reveals that he’s taken over their operation so they can join forces with the Foot Clan, just as Splinter planned.  The Turtles aren’t happy with yet another surprise from Splinter, but don’t have time to debate it.  Splinter orders Casey and the Dragons to form a perimeter around Dun’s building.  He, the Turtles and Nobody are then flanked by an army of Foot Soldiers as they storm the premises. 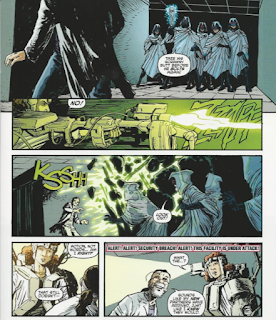 Inside, Harold and Libby (in her armor) come to verbal blows, as Harold refuses his ex-wife’s offer of reconciliation, reminding her of how she stole his inventions and walked out on him.  Libby has a few things to say about that, accusing Harold of making up and believing such a lie to emotionally soften the blow of her leaving him.  In reality, they came up with all their ideas together and she had every right to take them with her.  Regardless, she regrets what she did and has come to realize that all the financial gain she’s made with Dun has been unsatisfying without Harold by her side.  Harold isn’t ready to believe her, but when the Street Phantoms catch up, Libby blasts them with her cannon.  Harold, stubborn as ever, still isn’t sure he can trust Libby as they both make a break for it.

Jammer and the Street Phantoms recover and relay back to Dun that the Inventor (Libby) has betrayed them.  Dun, seeing the Foot invading on his security cameras, orders the Phantoms to execute everyone they see, including Harold and Libby.

Splinter and the Foot Soldiers take the elevator shaft to Dun’s office while the Turtles and Nobody take the stairwell.  The Turtles are met by Jammer and his Phantoms, who try to take them down with their EMP guns.  The Turtles dodge the blast and hit back using the field generators that nullify the intangibility cloaks, bringing the Street Phantoms down.  Maze, however, manages to crawl away.

Upstairs, Libby removes her armor and makes another attempt to reconcile with Harold.  She reminds him of how poor they were when they were together and laments how easy it was for Dun to tempt her with money.  She regrets it all and tells Harold that after living life without him, she knows how much she really needs him. 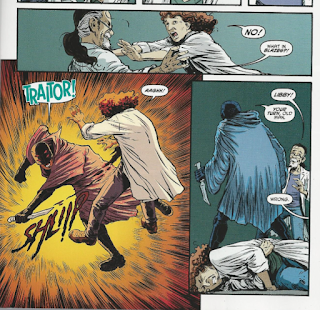 Suddenly, Maze bursts out of the stairwell door and comes at Harold with a knife.  Libby pushes him away and gets slashed in the stomach.  Nobody arrives seconds too late and blasts Maze with her anti-gravity cannon.  Harold holds Libby in his arms; she’s still conscious but fading.  The Turtles arrive and Harold tells them to stay away.  He tells Donatello that he’s brought him nothing but grief since they met and he wants nothing more to do with any of them.  Nobody stays behind to help get Harold and Libby to safety as the Turtles head to Dun’s office.

In the office, Dun is taking on a unit of Foot Soldiers and singlehandedly crushes them all.  Splinter and the Turtles enter and Splinter offers to fight Dun one-on-one.  They fight and Splinter wins easily.  Splinter makes another offer: Dun may live in exchange for all his assets.  Dun refuses and so Splinter orders Jennika to kill him.  She stabs him through the back with her claws and the Turtles decide they’ve had enough. 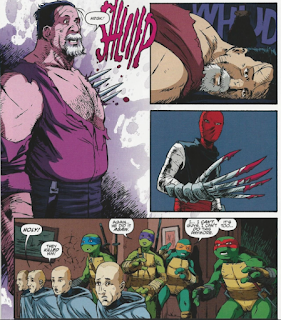 Raphael, Donatello and Michelangelo can’t take anymore of Splinter’s secrets, to say nothing of the theft and murder he’s been engaging in, and they walk out of the Foot Clan and their father.  Leonardo stays behind to demand answers, but Splinter says that he has never been able to keep them safe, either in their previous life or this one.  He realizes that only his sons can keep each other safe, and they must do so away from the Foot Clan.  Leo agrees and leaves Splinter to join his brothers.

Splinter then turns to the Street Phantoms, removes their cloaks and grimly orders them to warn everyone within the underworld to fear the Foot Clan.

*The events of TMNT: Bebop & Rocksteady Destroy Everything! and the TMNT Universe: The War to Come story arc take place between this and next issue.

We’re at the end of “Chasing Phantoms”, so let’s take it all in for a second.

Dun’s dead and the Street Phantoms are cloak-less, so they seem to be out of the picture (some more so than others).  As villains, they didn’t last very long and they weren’t very… good?  Yeah, they weren’t very good.  But then, I think that was sort of the intention with this story.  “Chasing Phantoms” was ultimately a rather smalltime altercation for the Turtles (considering the stakes they’re usually up against), featuring some D-list foes ripped from a cartoon that’s often considered the nadir of its Turtle Era.  The writing was sort of on the wall that Dun and the Street Phantoms weren’t going to be the heaviest of hitters.

Instead, “Chasing Phantoms” sees most of its impact in its character work.  This was small potatoes for Splinter and the Foot Clan; defeating and absorbing one of the many criminal enterprises in the city.  This is the sort of shit Splinter’s going to be doing on a daily basis as he rebuilds the Foot into a superpower.  So it’s interesting to see that the Turtles couldn’t stick with the program past so much as Step 1.  Using friends as “assets”, keeping secrets from each other, stealing, killing… They get half a taste and they’re already out.

In that respect, the arc works really well; these villains are a smalltime blip on the TMNT’s radar and it’s already too much for them to handle, much less getting to any of the bigger fish on Splinter’s agenda.  The scope is quite nice and it also gives us a solid feel for the diverging moral compasses.  The Turtles and Splinter part ways right at the gate rather than either side compromising their vision or code of ethics by prolonging things.

And the split sets up some potential storylines of heavy proportions I hope aren’t ultimately squandered.  Splinter allows his sons to leave the Foot Clan so they can be safe from what he has planned, but eventually there’ll need to be a reconciliation.  Are the Turtles going to end up having to fight Splinter’s Foot Clan?  Will issue #100 be an inversion of issue #50, with Leo having to take down Splinter the same way Splinter had to take down the Shredder?  Loads of potential.

As for the elimination of Dun and the Street Phantoms, I don’t normally like to see villains “wasted” by killing them off, but I think they got as fair a shake as they were gonna get in this comic.  Those guys were the definition of D-list, considering their source material, and as well as they were reimagined for this comic, let’s face it: Not every villain is going to be a major player.  Batman’s got his arch foes like the Joker and Ra’s Al Ghul, but he’s also got his rotating cast of punching bags like the Scarecrow, Killer Croc and, fuck, Signal Man?  Dun and the Street Phantoms were like that.  Signal Man.  They served a purpose, got in some good stories, but they were never gonna compete with the big bads like Kitsune, Bishop or Baxter Stockman.

Although Dun is dead, there’s still an open door for the Street Phantoms to come back, at least.  They’re still alive, if powerless, but they could always get upgraded tech.  While I don’t think they were ever destined to be big shots, they DID make for some very interesting cannon fodder henchmen, certainly breaking up the monotony of generic thugs and mobsters.  Dun can stay in the grave, though.

The reunion between Harold and Libby was a nice bit of scripting on Waltz’s part, playing it emotionally but without too much cornball soap opera stuff.  I loved the revelation that Libby didn’t steal anything from Harold; that the accusation was just his way of dealing with the pain of his wife walking out on him.  In a way, I feel silly for having ever taken Harold’s claims at face value.  His portrayal since the beginning has been that of a stubborn and prideful man, so any self-victimizing back story he might concoct should have been taken with a grain of salt.  It was a smaller “gotcha” moment in an issue packed with big situations for the more popular characters, but it was executed nicely.

We get another fracture in Team Nobody, as Harold now wants nothing to do with Donatello and the Turtles.  I hope that animosity doesn’t extend to Angel/Nobody, because as I’ve been saying for some time, I’ve adored the Harold/Nobody/Alopex team and I want to see it mended, not splintered further.  Heck, if Libby pulls through, she’d be a great addition to the dynamic (maybe fill in for Donatello as Harold’s scientific sounding board).  Here’s hoping for the best.

This is Wachter’s last issue for the time being and I hope we see more of him down the line.  While Santolouco’s coming back, and he IS the “signature artist” for IDW’s Turtles, Wachter was a solid addition to the rotating talent team and his aesthetic felt distinct without deviating too much from what the book typically looks like.  The one-page sequence where Dun rolls into battle and flattens all the Foot Soldiers was an excellently laid out last hoorah for the otherwise mediocre villain.  I particularly liked the way Wachter had the panels tilt and go off-kilter as Dun goes more and more berserk.  Nothing too obvious, like a shattering window effect, but a subtle way of expressing his growing rage.

Anyhow, “Chasing Phantoms” hasn’t been too well reviewed, as I look around the internet, but I don’t think I’ve seen many people out and out trash it, either (except for one dude in this issue's letters column).  I can see how others might feel that way, since the villains are intentionally lower tier and the stakes, at least superficially, don’t seem that big.  But while the stakes for the “fate of the Earth” or whatever are certainly absent (this arc essentially boils down to a rescue mission and a hostile takeover), you can’t have that kind of stuff in EVERY arc or it becomes exhausting.  So instead, the bigger hits are reserved for the characters and their relationships to one another.  And in that regard, this is a momentous issue as the Turtles walk out on Splinter, lose Harold as an ally and the future looks uncertain.