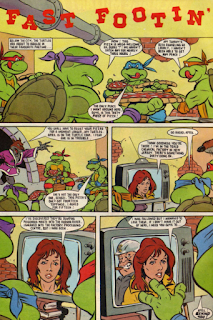 Down in the lair, the Turtles are about to dig into some pizzas when Splinter tells them that April is making an emergency call via the Turtle Com.  The TMNT check it out via... the television (?) and April informs them that she's investigating the Toxco Chemical Factory in New Jersey.  She's found evidence that they've been dumping waste into the Hudson river, but fears she might have been spotted.  Her transmission is cut off when the factory boss sneaks up behind her and grabs her. 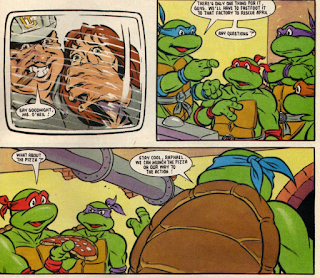 The Turtles hightail it ("fast foot it") to Toxco in the Turtle Van, bringing their pizzas along for the ride.  They sneak under the chain-link fence, but are soon attacked by guard dogs.  Donatello offers them their pizzas and the dogs become docile.  Leonardo gives them one of April's notepads to sniff and the canines lead the Turtles to the room she's being held in. 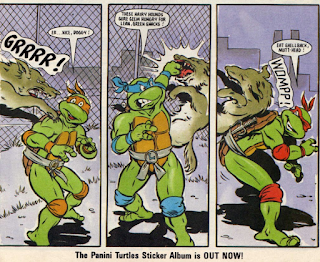 Inside, the factory boss has April chained to a toxic waste barrel on a conveyor belt heading to a sludge vat.  Once dunked, she'll be chopped up by a propeller and her remains dumped in the Hudson.  The Turtles crash through the wall in the Turtle Van and confront the factory boss.  He responds by summoning his robot guards.

As the other Turtles fight the robots, Leo jumps onto the conveyor belt to free April.  He cuts her loose from the barrel, but not before both of them plunge into the vat.  They're soon sucked toward the propeller and can't get out.  With the robots defeated, Donatello and Raphael run to catch the fleeing factory boss while Michelangelo swoops in on a dangling hook and chain to fish Leo and April out of the vat.  The factory boss is quickly captured and Mikey gets a kiss from April for his efforts. 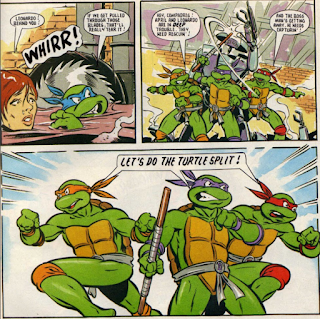 Later, the Turtles watch April's report on Channel Six, enjoying the news that Toxco will no longer be polluting the river.  The Turtles all lament the horror of pollution and Splinter tells his pupils to practice what they preach by cleaning up the pizza boxes they've left all over the lair floor.

*This story was published alongside "The Green Menace" in the same issue.

With a title like "Fast Footin'", you'd expect this comic to involve the Foot Clan in some capacity.  But NO!  That would be too obvious.  And Fleetway likes to keep its readership on their toes.

Predictable as the plot may be, the art from Mick Austin is a nice break from some of the other Fleetway guys who constantly resort to tracing their own poses over and over again.  The draftsmanship is pretty nice (particularly on the splash page where the Turtles are peeking into the window of the room April's being held in) and I do like the flatter coloring style on this installment.  The usual glossy highlights are used judiciously and it isn't as overly painted as other Fleetway Turtle comics (the excessive painted coloring style always made the comics look too heavy and dark).

The rest is all puns and plenty of nonsense.  Why does the factory boss have an army of robots at his disposal?  Why does Mikey suggest they use the Turtle Launcher to get over the fence only for his suggestion to be completely ignored when the Turtles decide to crawl under it?  Why is the Turtle Com transmission being displayed on the television and not the actual Turtle Com?  Why am I even bothering?

One last note is that Splinter calls the Turtles "my sons" in this comic.  Although any familial relationships between the characters was absent from the Fred Wolf cartoon, he actually DID refer to them as "my sons" at least once in the first season of the cartoon.  So I won't chalk that up as an error on the part of the writers.  God, I'm so generous.  YOUR WELCOME, British guys who wrote a cartoon tie-in comic 26 years ago.  You owe me one.