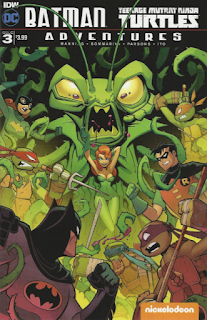 "Greener on the Other Side"

In Central Park, the Turtles and the Bat-Family do their best to take down the mind-controlled Snakeweed, but he's evolved plating to cover his heart; his only weakspot. 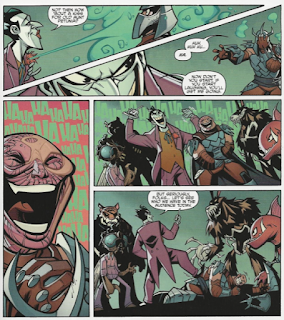 On the docks, the Shredder is flanked by Tiger Claw, Rahzar, Fishface and Baxter Stockman.  He asks what the Joker's demands are and the Clown Prince of Crime insists he wants the whole city.  He hits Shredder with a burst of Joker gas and the villain falls to the floor in a laughing fit.  Joker then approaches Stockman and asks where he can get some mutants of his own.

Back in Central Park, Batman orders Robin and Raphael to go find Poison Ivy since she's the one controlling Snakeweed.  The two hunt her down, but are immediately ensnared by vines.  Robin manages to use a batarang to cut Raph free and the Turtles tackles Poison Ivy into a nearby lake, holding her underwater until she goes unconscious.  Once that happens, Snakeweed collapses and the fight ends.  Raph carries Poison Ivy to the Kraang portal back to Gotham, but as soon as he puts her through, the portal closes. 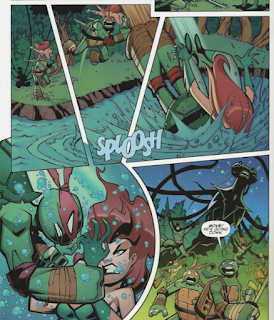 Down in the lair, the Turtles and the Bat-Family mingle as best they can.  Donatello attempts (with little success) to flirt with Batgirl, April seems to have the hots for Robin, Michelangelo keeps trying to compare his "superhero" exploits with his guests', Raphael broods and, naturally, Batman and Leonardo compare notes.  Master Splinter then steps in and turns on the TV to a relevant news report.  Apparently, the East Village is under attack from various strange apparitions.  Donatello gets a hit on his tracking device and learns that Kraang portals are opening in Chinatown.  Batman orders the team to split up: He, Leonardo and Raphael will hit the East Village, everyone else will investigate Chinatown.

Mikey, Donnie, April, Robin and Batgirl take the Shellraiser to Chinatown where they find Footbots with creepy smiles painted on them. 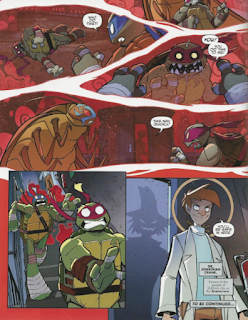 As for Batman, Leo and Raph, they find the streets of the East Village choked with a strange gas.  Batman puts on a gas mask and tells the Turtles to stay on the rooftops while he tries to control the panicked crowd.  He warns them to keep an eye out for a man dressed like a scarecrow.  Before the Turtles can ponder what that means, the gas hits them and they begin to hallucinate their worst fears: Raph sees Leo as a giant cockroach and Leo sees Raph as a shambling zombie.  They begin to panic when a man calls from the stairwell, telling them to get inside quickly.  They comply, unaware that the man is Jonathan Crane: The Scarecrow.

*Mikey mentions how Snakeweed was blown up in TMNT New Animated Adventures #2.

Now we're talking.  The setup and introductions are over with and we're ready to get to the good stuff: The Turtles and the Bat-Family teaming up to fight their various rogues.  It's rather simple, I'll admit, but it is exactly what I want to see in this miniseries.

Poison Ivy isn't my favorite Batman villain, and Snakeweed is no one's favorite TMNT villain, but together they formed a pretty good team-up for this issue.  While the resolution was what you'd expect (stop Poison Ivy and you stop Snakeweed), I wasn't expecting Ivy's defeat to be quite so brutal.  So Raph just holds her freakin' head underwater until she nearly drowns?  Hardcore, man.  I remember an episode of The Batman had a similar resolution when that version of Batman fought Killer Croc.  He just held him underwater until he lost consciousness and resuscitated him later.  THAT'S how to solve a problem!

And speaking of The Batman, that other Batman cartoon that's got a worse reputation than Batman the Animated Series, the interaction between Joker and Shredder got me thinking about it.  This Shredder's voiced by Kevin Michael Richardson, who also voiced the Joker in The Batman, so when he gets gassed and starts laughing, I intuitively heard Richardson's Joker voice in my head.  So it's like two different Jokers laughing at once.

And in regards to THAT scene, you might be disappointed to see Shredder go down so easily, but I think Joker really did do a good job backing him into a corner.  And the sight of the Shredder getting gassed and laughing like a lunatic was a genuine surprise (you'd never expect him to be subjected to such an indignity).  I'm sure payback is inevitable.

Thus far, though the series is ramping up, it's still kind of episodic: One villain fight after another.  There's the overarching Joker/Foot Clan thing brewing on the side, but the series to this point has been just a string of team-ups and fights.  It's a departure from the last Batman/TMNT crossover, but it helps to give this version it's own identity.  I'm having fun with it and Manning is trying his best not to retread ground from the last crossover quite so much anymore.  The bit where the two teams bond in the lair doesn't hit as many of the same points as in the other crossover, finding new angles to exploit (so we know for certain now that Donatello has a "type").  The bit where Michelangelo and Batgirl dance to a parody of the Ninja Rap ("Wingnut Rap") was cute but dumb.  But cute.

While this miniseries hasn't exactly knocked my socks off yet, it IS getting to the good stuff.  And it's getting there fast.  The Scarecrow also happens to be my favorite Bat-Villain, so I'm anxiously looking forward to next month.