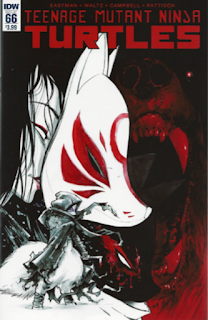 In the bleak, mountainous regions of Alaska, Raphael and Angel/Nobody gear up in search of Alopex, using a GPS tracking device Donatello gave them to locate her.  Meanwhile, Alopex is sleeping in a cave, her mind under constant siege by Kitsune, who still seeks to take control of her. 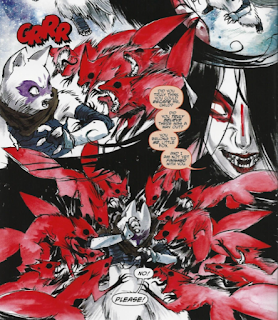 Elsewhere, Angel chides Raph for his crush on Alopex.  Raph doesn't think it's worth pursuing, since they're different species, but Angel tells him to go for it anyway.  She says that the way Raph and Alopex connect on an unspoken level reminds her of the way her dad and late mother used to connect.  Raph turns the tables on Angel, asking what's up between her and Woody.  Angel brushes it off, insisting that even if Woody's cute, he's still a dweeb.  With the fun over, they begin to scale a mountain that Alopex should be at the top of.

As for Alopex, her psychic battle against Kitsune is going poorly.  Kitsune reveals that the Shredder was never the "bear" that tormented her and represented Alopex's fears.  Kitsune was always the bear and, appropriately, transforms into one.  The Kitsune-bear tackles Alopex and threatens to swallow her up, forever imprisoning her as a pawn.

Reaching the top of the mountain, a blizzard kicks up and Raph and Angel can no longer find their way.  Raph decides to use the mental techniques Leonardo taught him to find Alopex with his mind and begins meditating. 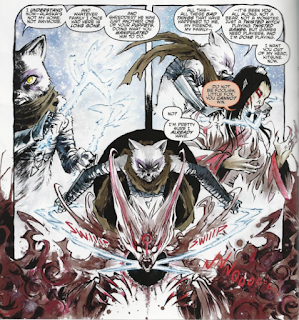 Raph appears in Alopex's vision moments before Kitsune can consume her.  Raph cheers Alopex on and she gains the strength to fight back.  She overpowers Kitsune and cuts the head off her astral form, banishing her from her mind. 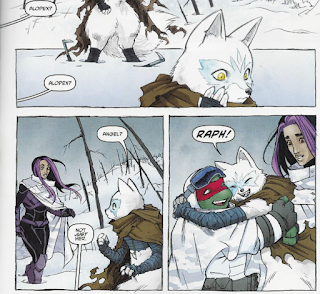 The blizzard stops and Alopex awakens (her butterfly eye-mask having changed from purple to blue).  She immediately finds Raph and Angel and is happily reunited with them.  As they head back to the (Foot Clan?) helicopter, Raph asks what became of Kitsune.  Alopex fears that Kitsune survived the psychic attack and is far from defeated.  Getting into the chopper, Angel asks Raph not to tell Woody that she called him cute.  As they fly away, a family of polar bears watches from a cliff.

*The events of TMNT Universe #6 take place around the same time as this issue.

*Alopex went missing in TMNT (IDW) #60.  Her origin and the significance of the bear were seen in TMNT Villains Micro-Series #4: Alopex.

*Splinter charged Raphael and Angel with tracking down Alopex in TMNT (IDW) #61.  Alopex was revealed to have been GPS chipped in that issue, as well.

*Leonardo began teaching his psychic defense techniques to the others at the end of the back-up story in TMNT Universe #5.

Well, okay, if you're really into the romantic angles of the IDW TMNT series, then this issue is gonna be for you.  But to me, the Raph/Alopex dynamic has always come across as rather cringe-inducing and forced; they've never displayed any sincere chemistry and they've interacted so seldom over the years it's hard to believe they could be in love.  The most they've ever done is awkwardly smile at one another on two, maybe three occasions.

The conversation between Raph and Angel made me want to gag; it was a cheap cop-out to cover for all that romantic work the writers DIDN'T do.  "Oh, the reason they're totally in love even though they've hardly ever shared any page space together is because... because... they share an unspoken psychic bond!  They don't NEED chemistry or to even spend time with each other!  What they have is intangible!"

That's as bad as using "destiny" as an excuse for cheap romance.

But okay, if you've been on the edge of your seat waiting for Raph and Alopex to hook up, maybe you'll be pleased with this issue.  And anyway, maybe now that Alopex is back in the book and Raph has confessed his affections for her, we can actually start to get that chemistry we've never seen before.  They have to start somewhere.

And on the subject of the "now that Alopex is back in the book" thing, can we just STOP having characters get estranged from the cast and have to be rescued/reunited?  I've harped on this before, but it isn't going to stop being a valid criticism.  We'll never GET these dynamics and relationships if the characters are constantly running away and having to be tracked down and brought back.  And that says nothing about how tiresome the exercise has gotten.  All the Turtles have had an AWOL storyline by now, so we're left to endure the scenario with third-stringers like Alopex.  Who will be next?  Are we gonna get a storyline where Jennika is separated from the team and has to be reunited?  Oh no, Pigeon Pete has gone missing!  Better start a story arc about getting him back!

I'm being a dick and maybe I'm trashing this issue way harder than it deserves, but story-wise it's a collection of the elements of the IDW series I DON'T like.  Crude exposition trying to manufacture relationships because the groundwork to give them substance was never built... A repeat of the rescue/reunion storyline we've seen five or six times in the book already... Characters overcoming the villain by fighting them on the astral plane and winning because of feelings...

There's nothing FRESH in this issue.  It's not just stuff we've gotten before, it's stuff we've gotten SEVERAL times before and absolutely nothing new or innovative is done with it.  How many more times do you really want to see the characters go into the psychic realm and fight nebulous monsters but win because "I have FAMILY!  Also LOVE!" ...?

But the art was nice.  Campbell draws the cutest Alopex and people like it when Campbell draws Alopex so that alone was surely enough to justify this issue.  The story and dialogue was as tiresome as I made it out to be, but if all you want is to see some very pretty pictures then you're going to get it.  I love the watercolor wash Campbell uses and there's this disarming blend of horror and cuteness that defines Campbell's style.  Like those bloody red foxes that Kitsune sics on Alopex during the first vision; you want to pet them but you also want to keep your distance.  The issue reads very quickly because there are so many splash pages and montages, but with dialogue like this, I'm okay with the issue reading quickly.

Look, art aside, I think I've made it clear that this was not my cup of tea.  This is what the IDW comic reads like when it's on autopilot.  So much of it is stuff we've gotten again and again and again; I feel like a record is skipping or something.  There are definitely interesting and original plots going on in IDW as we speak (the whole "Splinter leading the Foot Clan" thing has been fascinating), but this was not one of them.