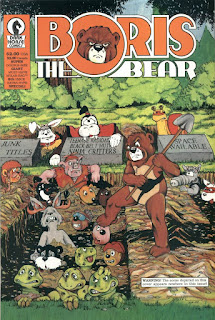 Boris the Bear is having a hard time fitting in with humans and as his day gets worse, he becomes more and more depressed.  Elsewhere, a secret meeting of all the Teenage Radioactive Black Belt Mutant Ninja Critters (the Juvenile Deviant Hard-Shelled Assassins among them) is called to order.  A Panda Khan parody explains that because Boris the Bear exposed them all as cliched rip-offs with no substance, it's HIS fault that the black and white comics implosion happened.  He asks if they'll all band together to get revenge on Boris for ruining their careers and the TRBBMNC cheer in unison. 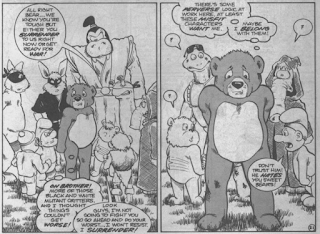 Feeling dejected, Boris goes for a walk and is ambushed by the TRBBMNC.  Not feeling up to fighting, he surrenders.  Boris is taken back to their HQ and Not-Panda Khan tells him that he will help the TRBBMNC return to the heights of their cheap knock-off glory from before the black and white comics crash.

Boris musters up the fortitude to defend himself, explaining that HE didn't kill their industry; it was the fault of their own terrible comics.  He then storms out of the HQ, insisting that the TRBBMNC have actually been killing each other by being knock-offs of other knock-offs.  After he leaves, the Mutant Critters all turn on one another and start killing each other for real. 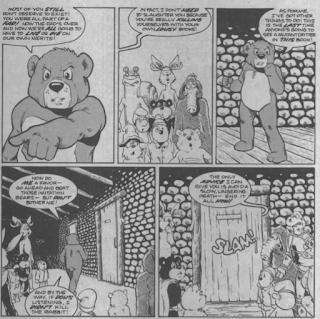 Boris goes home and finds his human friends are all ready to forgive him for what the fuck ever and the issue ends on a happy note.

*Once again, this was a parody comic and not an official cameo from the TMNT.  However, the actual TMNT do make an appearance in the letters column of the book in a photograph taken by Richardson of several shredded TMNT comics sent in by a fan (who agreed with Richardson that the Turtles are trash).  A disclaimer is added to the bottom of the page, citing Eastman and Laird as the owners of the TMNT.

*Boris slaughtered all of the "Teenage Radioactive Black Belt Mutant Ninja Critters" in Boris the Bear #1.

*The anthro animal indie comics characters would get their final revenge on Boris in Laffin' Gas #5 (which featured legal appearances from all the guest characters and not parodies).

*The Juvenile Deviant Hard-Shelled Assassins seem to have undergone a slight redesign since their last appearance to make them look less like the actual TMNT.  This involves giving some of them sunglasses instead of bandanas.

*New to the group are parodies of other TMNT parodies from the era, including knock-offs of the Pre-Teen Dirty-Gene Kung-Fu Kangaroos.  There are also snails with bandanas, but they predate the Immature Radioactive Samurai Slugs by 3 years, so they aren't parodies of them.  No parodies of the Adolescent Radioactive Black Belt Hamsters or the Geriatric Gangrene Jujitsu Gerbils, though.

*I didn't make any of those up.

*This issue also came with a bonus pin-up featuring an unused version of the cover.

I know I said I wasn't going to review anymore of these, but I found the issue and couldn't think of a good reason not to do it.  So here we are.

The gimmick of slaughtering a bunch of shitty indie comics anthropomorphic animal characters was fun... for an issue.  But you can't really milk a whole series out of that or the joke wears thin.  By issue 8, I think the creative team were coming to grips with that, so the majority of this installment consists of Boris moping around, lamenting how quickly his sales and his star have fallen.  He isn't WRONG, but it also makes this comic a hell of a fuckin' bore, too.

Not all characters who were born out of satire, or as parodies of something trendy, are forbidden from expanding their universe and becoming their own thing.  Just look at the goddamn Ninja Turtles.  They originated as a one-shot parody of Daredevil, Ronin and the X-Men.  But they quickly stepped out of that box and built their own unique mythology to the point where the parody aspect is more academic now than it is obvious.

Boris seems like he's trying to do that, and much of this issue is just him interacting with his diverse cast of supporting characters, but none of those characters are interesting and the exercise is just as I described it a paragraph or two ago: A fuckin' bore.

What's fun about this issue is also it's shortest element (and what the cover spotlights, no less).  The knock-offs of all those shitty anthro animal indie books are great, even if the self-righteous monologues about their lack of originality can get too close to explaining the joke, and we get to see more in this issue than we did in the first.  Not-Panda Khan, Not-Cerebus, Not-Care Bears and Not-Smurfs (the last two taking jabs at licensed cartoon comics) get the most attention.  Incidentally, the Hard-Shelled Assassins are reduced to crowd fillers and get no dialogue.  I get a feeling that was intentional, as they rub elbows with kangaroos, rabbits, snails and other animals which are all wearing bandanas and grimacing; perhaps a jab at how the TMNT are getting lost in their own shitty knock-offs (many of which I listed in the Turtle Tips).

The meta commentary is, as I said, too on-the-nose at times and several jabs are repeated to the point of being obnoxious.  Some of the commentary is pretty solid, however.  I particularly liked how Boris points out that by glutting the market, the Radioactive Critters are actually the ones who are killing each other, thus causing them to turn on one another. 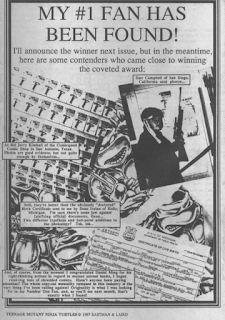 I really don't want to do anymore of these Boris the Bear comics, even if the Hard-Shelled Assassins appear in more of them.  And I'm on the fence about doing some of the other contemporary black and white TMNT knock-offs, like Black Belt Hamsters and Jujitsu Gerbils.  I have a couple issues of those two, as well as random issues of Barney the Invisible Turtle, Aristocratic Xtraterrestrial Time-Traveling Thieves, and mother fucking Cold Blooded Chameleon Commandos.  Jesus Christ, even I can't believe I own that last one.

Boris was right.  He was right all along.