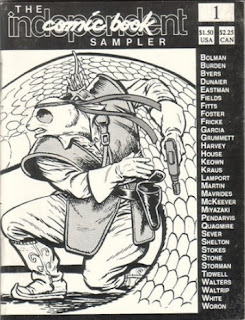 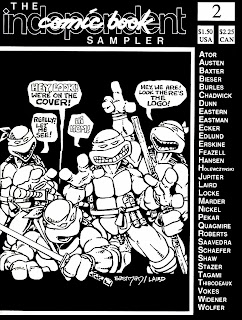 The Independent Comic Book Sampler was a 2-issue mini-comic series, both issues released simultaneously, that spotlighted various indie comics creators and their projects.  Most of each issue consisted of half-page biographies with addresses on the bottom so readers could order books from the publishers.  Other contents included pin-up art and short comics. 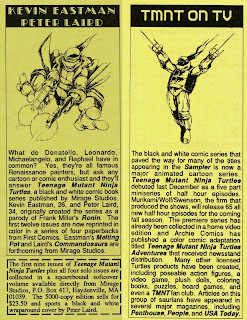 Although Eastman and Mirage are mentioned in issue #1, there is no TMNT content.  Issue #2 features an original cover by Eastman and Laird, a Barbarian Turtle pin-up by Eastman, and two blurbs about the TMNT (one about the comics, one promoting the cartoon).  There is no original comic content.

*Both issues were limited to 4000 copies each, with 50 of each being individually numbered limited editions with green covers.

*The Eastman and Laird cover was reused, with new lettering, as the inside cover of the fifth printing of TMNT (Vol. 1) #1 (released August, 1988).

How can I even review something like this?  It's pretty much just an ashcan mini-comic that barely qualifies as a mini-comic.  It's more like a catalog to help consumers get in touch with the creators or publishers of independent comics so they can order back stock.  It wouldn't be worth mentioning if it weren't for the original Eastman & Laird cover.  And I guess the Barbarian Turtle pin-up that made it's first appearance here (it would get recycled as bonus content in a lot of random books later on; you've probably seen it by now). 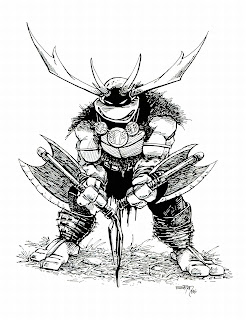 Beyond that, well, I guess this is another case of Panda Khan kinda-sorta coexisting in a book with the TMNT, but not actually interacting with the TMNT.  Just like with Equine the Uncivilized and Laffin' Gas.  So weird.  He got a toy in their toyline, and appeared in the same books as them, but never actually met them in any significant capacity.  Like ships passing in the night...