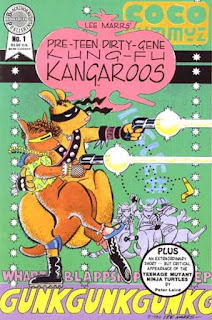 One of those Kangaroos is running down the street, looking for a redhead in a spaceship.  As he passes a bus stop, he bumps into Donatello and asks if he's seen her. 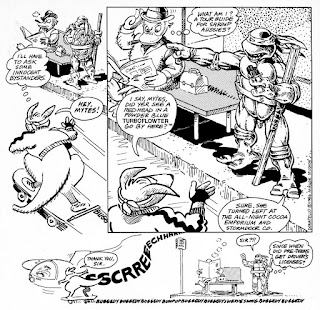 Donatello tells him that she's around the corner and the Kangaroo thanks him.  Watching the Kangaroo board the spaceship, Donatello wonders what a pre-teen is doing with a driver's license.

*The Turtles will cameo in a book alongside the Kung-Fu Kangaroos again in Laffin' Gas #5.

Oh god, ANOTHER one?  Please, someone tell me I've gotten to all the random indie comics cameos the TMNT made back in the '80s.  There CAN'T be anymore.  There just CAN'T be!

This one surprised me, too.  There were more shitty Teenage Mutant Ninja Turtles knock-off comics than you or me can count.  Adolescent Radioactive Black Belt Hamsters, Mildly Microwaved Pre-Pubescent Kung-Fu Gophers, Cold-Blooded Chameleon Commandos, Geriatric Gangrene Jujitsu Gerbils... FUCK!  And the list goes on!

But this was the only one of the bunch to get a legit cameo from the actual TMNT, akin to something of a blessing.  Peter Laird even contributes the art for Donatello, who only appears in two panels as a gag.  So I suppose, for that reason alone, this comic is... significant?

No, I wouldn't go that far.