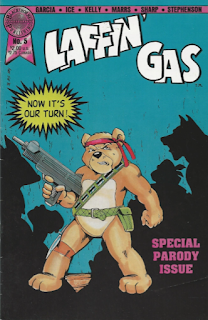 At a secret meeting place after midnight, a robed figure assembles a motley crew of anthropomorphic animal characters, both from independent comics and mainstream media.  They want one thing and one thing only: Revenge on Boris the Bear!  Not long ago, the self-righteous bear passed judgment on them, declaring them all to be worthless.  The assembled indie comics characters have decided that Boris deserves a taste of his own medicine. 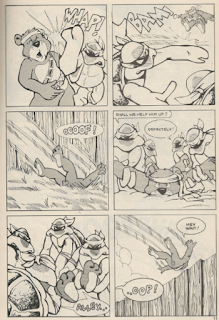 Boris, meanwhile, is up in his tree house, reading his favorite comic: Boris the Bear.  Suddenly, a bomb crashes through the window with a message attached: "Say your prayers", signed by The Funny Animals.  Boris gears up and leaps out onto the lawn for the showdown.

He is immediately disarmed by none other than the Teenage Mutant Ninja Turtles.  They pummel him without effort, remarking that Boris isn't so tough without his writer.  They then chuck him over the fence and into the next crossover.

Boris proceeds to run a gauntlet of angry indie characters, only some of whom I can identify.  The Smurfs and the Care Bears eventually trick him into searching for refuge in the secret base of the Funny Animals.  They corner Boris and the robed leader points a cannon in his face.  Boris braces for impact, only to get a cream pie right in the kisser.  Boris is confused and demands to know who the hooded leader is. 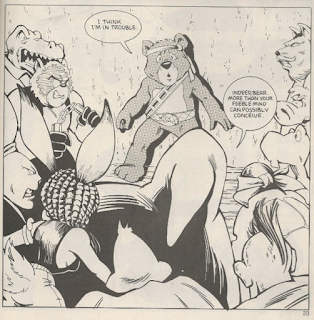 The leader disrobes and reveals that he's none other than Droopy Dog, one of Boris's idols.  Droopy tells Boris that he was acting like a real prick, telling all the other anthro indie characters that they're completely without worth.  In fact, many of the characters he dismissed have gone on to have successful careers full of critical acclaim.  And many of their books are doing better than his own!  Boris realizes he overreacted and thanks Droopy for knocking some sense into him.

*The TMNT will get revenge on a parody of Boris the Bear named "Borax the Bear" in Samurai Penguin #4 (published three months after this issue).

*Many indie comics characters whom the TMNT have crossed over with before (or will meet again) make appearances in this issue, including Panda Khan, Samurai Penguin, Miyamoto Usagi, and Cerebus the Aardvark.

*A few TMNT knock-offs also appear in this issue, including the Pre-Teen Dirty-Gene Kung-Fu Kangaroos and the Cold-Blooded Chameleon Commandos (both published by Blackthorne).

*Only some of the creators of these characters are credited or acknowledged, so it seems likely that some appear legally and others were included without permission.  Obviously, Bugs Bunny, Daffy Duck, Beany & Cecil, the Care Bears, Spider-Ham, the Smurfs and Droopy Dog appeared without being licensed.  But no mention is made to Dave Sim or Stan Sakai for the use of Cerebus or Usagi, so this may not be an "official" appearance on their parts.

I keep saying "I'm not going to do anymore of these Boris the Bear things" but then I just keep finding more.  And I REALLY can't ignore this crossover, because unlike the last two, THIS one is legit!

The three Boris the Bear/TMNT stories actually form an interesting trilogy when read altogether and each installment takes a different angle in its criticism.  The first crossover (with parody versions of the guest characters) was an all-out slaughterfest as Boris hunts down and kills all the funny animal characters, blaming them for causing the black 'n white comics implosion.  The second crossover (still featuring parody versions of characters) sees those funny animals out for revenge, only for an uninterested Boris to lay some reality on them, informing them that they've really been killing each other by acting as copies of copies of whatever is slightly successful.

This installment, the last in the series, turns the critical narrative around on itself and gives us the other side of the argument.  The ACTUAL funny animal characters, not vacuous parodies, get to have their voices heard and Boris gets what's coming to him.

I can see both sides of the argument, personally.  Boris was right in that there genuinely WERE too many shitty anthro animal indie comics clogging up the racks, and they WERE part of what caused the black 'n white implosion of the 1980s.  Hell, Kevin Eastman (under the pseudonym "Chet Peace") did this angry pin-up back in TMNT (Vol. 1) #8: 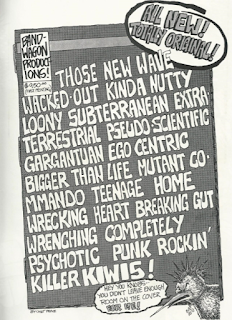 Peter Laird didn't mince any words on the subject in an editorial he wrote for Leonardo (microseries) #1.  But while he did call out the no-talent hacks of the black 'n white boom, he made sure to fairly point out that the boom resulted in nearly as many quality titles.  From Laird's editorial: "While it is true that the recent acceptance of (relatively) cheaply printed black and white comics as marketable commodities has allowed a number of zero-talent self-publishers to clog the shelves with dreck, it has also allowed quite a few very talented people to come out of the shadows and show us their stuff - stuff that a couple or more years ago wouldn't have seen print, or at least distributions, because it did not fit in with the homogenized 'house styles' of Marvel and DC."

So not only were both Eastman and Laird aware of the bad anthro animal comics being churned out by indie publishers, they were quite critical of them.  But they were pretty fair about it, either making their critiques with good humor or commenting on the quality titles that resulted from the boom.  All that being said, I doubt they appreciated being grouped together with all the "trash" that Boris slaughtered in his comic with an "all or nothing" attitude.

But before I sound too sycophantic toward Eastman and Laird, let's not forget that they permitted their TMNT characters to appear in crossovers with EXACTLY the kinds of shitty anthro animal indie comics that they were criticizing.  I'm talking hot garbage like Rockin' Rollin' Miner Ants and the Blazing Tales Varmints.

This capoff to the trilogy is a fair rebuttal, and certainly the creators and their characters warranted a chance to defend their worth.  While 90% of the characters featured in this comic have fallen into the tenth level of obscurity, at least they got the chance to have a say.

Now, what I DON'T know is how many of said creators were involved in this thing.  The ones I listed in the credits section are the only ones named in the book, so many of these characters probably appeared without permission.  In fact, this may not even be a legit appearance from Boris the Bear.  His name and likeness are used freely, but no mention is made of his creators: Mike Richardson and James Dean Smith.  Some of the Boris the Bear issues even feature jabs at Laffin' Gas, calling it Passin' Gas, so I'm really not sure how legal this appearance was.  I mean, it's legal in that it all falls safely under the guidelines of parody laws, but I mean "legal" in that the creators consciously gave permission to see their characters used in the book.

Actually, now that I look at the dates, calling this the "third" installment in the trilogy is chronologically incorrect, even if I think it reads better as the third part.  It looks like this story and Boris #8 were produced at the same time and this one narrowly hit the stands first.  I doubt Boris #8 was a reaction to this comic, since it's unlikely Richardson and Smith could pump out a 36-page comic rebuttal in less than a month.  And it also seems likely those two weren't in on this thing, after all.

Well, whatever the case, I think this trio of Boris comics represents a more freewheeling time in indie comics, when everyone was using everybody else's characters either in legit cameos, quick gags, critical parodies, or just straight up theft.  You're not likely to see anything like this ever again.

So my earlier apathy toward these books has turned right around.  Read all three together and it's actually rather fascinating.  While I don't plan on reviewing any of the other TMNT knock-offs featuring hamsters and gerbils and kangaroos and chameleons, I think Boris the Bear warrants the pass I gave him.  His parodies of the TMNT led into a legit appearance from the TMNT, albeit possibly without a legit appearance from Boris.  Plus, a whole lot of Panda Khan, and we hardly ever see him in the same book as the Turtles.

If you can find these in the quarter bins, give them a shot.  They're wordy and juvenile and the parodies are often mediocre at best, but you get to see a bunch of indie comics creators acting like big babies and attacking each other in their own books.  Black and white indie comics were truly the webcomics of their era.