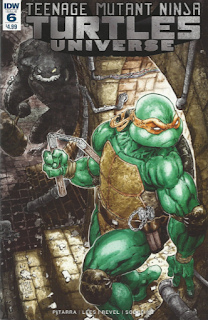 "The Rot in the Shell"

Down in the sewers, a maintenance worker happens upon a bunch of tiny blue worms with googly eyes.  Disgusted, he starts stepping on them.  A giant blue worm-monster then appears behind him and smashes him with a humongous mallet. 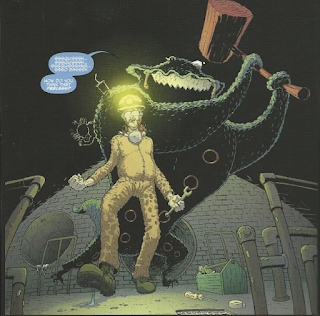 Later, Michelangelo heads back to the sewer lair with a fresh pizza for his brothers, but immediately ducks for cover when a police office comes down through a manhole.  Curious, Mikey follows her and, noticing a bunch of tiny blue worms eating away at an arch, shoves her out of the way before the crumbling masonry can crush her.  Thanking him, she introduces herself as Officer Maureen Lin.  She's looking for a maintenance worker named Calvin Banks who went missing (and also happens to be her brother-in-law).  Mikey offers to help her look and they continue down the tunnels.

Suddenly, a giant hand made of worms emerges from the water and pulls Officer Lin down.  Mikey tries to save her but is stopped by an anthropomorphic worm-man made entirely of tiny worms and junk.  He identifies himself as "Wyrm" and tells Michelangelo that he knows who he is.  He was once a clew of worms (I looked it up!) that happened upon a broken canister of mutagen.  They developed a hive mind and began to multiply, acting as eyes all over the sewer.  Through them, Wyrm has watched Michelangelo and all the other Turtles through their many sewer-based adventures. 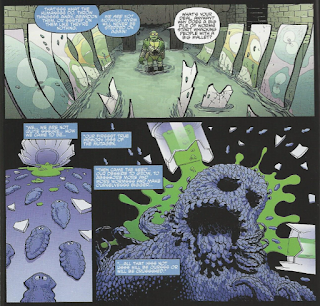 Using his mallet, Wyrm pummels Mikey and sends him crashing through a wall.  Mikey stumbles down the tunnel as Wyrm speaks to him through the many little worms squirming along the walls.  They lead him to Wyrm's lair, which has been decked out to look like a twisted amusement park made of trash.  Apparently, Wyrm hates how humanity discards things, leaving them alone and forgotten, and collects garbage to give the unwanted objects a sense of home and belonging.  Mikey pleads with Wyrm, even offering him a family among the Mutanimals.  Wyrm scoffs, insisting that he is his own family.

Mikey then finds Officer Lin unconscious on a table and goes to rescue her.  She wakes up, clutching a bloody, broken helmet and says she's learned what happened to her brother-in-law.  Before they can get out, Wyrm attacks.  Mikey reveals that his family, a REAL family, has given him strength and guidance over the years and fights back using skills he learned from Donatello and Raphael.  Wyrm overpowers him and Officer Lin tries to help by shooting the monster.  When that doesn't work, she shoots some helium canisters and the resulting explosion sets Wyrm's lair on fire.  Mikey tries to help Wyrm escape, but the monster chooses to perish in the flames with his beloved trash. 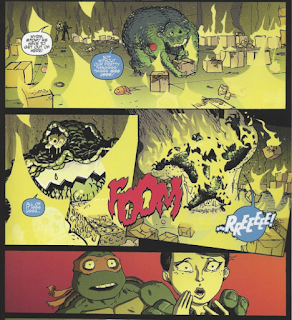 Later, Mikey helps Officer Lin back to the surface.  She promises not to put any of what she found in her report.  Elsewhere, one of the tiny worms is revealed to have survived and Wyrm plots his revenge.

A young girl named Jenny considers the origins of the ninja, how they rebelled against the order of the day and were created out of intermingling cultures, ideas and disciplines.  She then reflects back on her own life: Abusive father, bad neighborhood, drinking, partying, and the punk lifestyle she fell into. 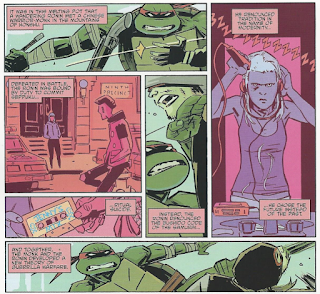 Now a masked ninja, she secretly follows Raphael as he patrols the rooftops.  She uses her phone to photograph him stopping a grocery store robbery and thinks about chaos and order as she reviews the pictures.

*This issue takes place around the same time as TMNT (IDW) #66.

*Mikey mentions his altercation with the government in TMNT Universe #4.

*Painted on the walls of Wyrm's lair are Playmates toyline characters Scratch, Panda Khan, Sandstorm, Pizzaface, and (of course) Wyrm.  Also maybe King Lionheart, but it's sort of obscured.

*Another NYPD Officer Lin appeared in the Mirage comics, throughout the Gang Wars storyline, beginning in Tales of the TMNT (Vol. 2) #36.  No telling yet if there's any relation between this Officer Lin and that Officer Lin, or if it's just a coincidence.

*This issue was originally published with 3 variant covers: Regular Cover by Freddie E. Williams II, Subscription Cover A by Pitarra and Sobreiro, and Incentive Cover by Logan Faerber.

I can't think of a better time to do it, so let's talk about Wyrm!

Personally, I like to think that Wyrm began as a creation of Rick Veitch.  In TMNT (Vol. 1) #24, he invented a mutant planarian worm villain named Bloodsucker who was all about draining the TMNT of their mutagen-laced blood to survive.


However, since Veitch refused to sign the "mandatory retroactive work-for-hire" contracts that Mirage sent to all their formerly freelance guest creators, Veitch maintained the rights to Bloodsucker (but lost all royalties as Mirage purposefully kept his work out of print).  So, less than a year later, Mirage staffer Steve Murphy (under the pseudonym "Dean Clarrain") created the character of Wyrm in the pages of TMNT Adventures #10.  Wyrm was a mutant planarian worm villain who was all about draining the TMNT of their mutagen-laced blood to survive.  The only significant difference between Wyrm and Bloodsucker?  Wyrm was owned by Mirage.


So Wyrm was created not so much out of artistic vision, but out of a diabolical scheme to avoid paying royalties to another creator.  Indie comics were a ruthless business back in the late '80s, I guess.  Be that as it may, Wyrm found his way into the Playmates toyline and became a favorite villain to many a child (even those who never read his two appearances in TMNT Adventures).


He's also been absent from all TMNT media for about 20 years.  He finally made a comeback in the Nickelodeon TMNT cartoon, in the season 4 episode "The Weird World of Wyrm".  Although he looked similar to his Archie and Playmates counterpart, this Wyrm had nothing else in common with them.  Nickelodeon Wyrm is a mischievous, interdimensional sprite-like creature that can bend reality ala Mr. Mxyzptlk from Superman or Q from Star Trek.  It was a Wyrm-in-name-only sort of deal.


Pitarra and Lees reintroduce a more classic interpretation of Wyrm that takes most of his ques from the Archie comic and Playmates toy while also downplaying the aspects that version copied from Bloodsucker.  So as a result, we end up with a Wyrm that looks and feels like Wyrm, but also comes across like his own unique character and not a legally-approximated copycat.  In other words: It's a great version of Wyrm!

Wyrm's vampiric aspects, the motivation that most closely linked the character to Bloodsucker, are excluded entirely.  Instead, Pitarra and Lees seem to mine most of their inspiration from Wyrm's appearance in TMNT Adventures #52.  In that story, Wyrm was shown to be able to disassemble himself by turning into hundreds of tiny, googly-eyed worms.


The IDW guys work that into Wyrm being a hive mind sort of creature with eyes all over the sewers, used to creepy effect as we learn he's been watching the Turtles since Day One.  They play fast and loose with the logic of his origin, not explaining much about the broken mutagen canister (was it the same one that doused the Turtles, Splinter and Hob, or a different one altogether?).  But this was a one-shot, so who really cares about the details?


The horror movie vibe was a nice touch, again calling back to the Archie appearances (where Wyrm was rather monstrous and terrifying).  Wyrm being a loner with compassion for discarded junk seems like a callback to his Playmates toy bio, which presented him as a solo character unaligned with the good guys or bad guys (and friends only with Muckman), always expressing a fondness for trash.  The Playmates bio also described him as a sanitation worker that fell into a dumpster full of Shredder's waste mutagen, so this isn't a 1:1 adaptation or anything.


There's a smidgen of sympathy to the villain; this ironic situation where he's made up of thousands of individuals but still feels alone and unloved.  They don't go too deep into that angle, which is good, and we still get a nasty monster of a bad guy.


Nick Pitarra is one of those artists who is very popular, but I've always been on the fence about him.  He reminds me a lot of Frank Quitely and I feel the same way about both of them.  I recognize that they are both fundamentally solid artists with great sense of scale, layout, perspective, atmosphere... All the important stuff.  But the aesthetic is just a dealbreaker for me.  Like Quitely, Pitarra's characters all look lumpy and pock-marked and deliberately ugly.  It FITS for this kind of story about a mutant monster made of worms and garbage, but I really couldn't get into a historical revisionist epic like Manhattan Projects.  I do believe that you can dislike a fundamentally good artist based on subjective aesthetic style choices, and that's the case with Pitarra.  He's a good artist, but I really don't like looking at his characters (also, Officer Lin can't seem to drop the "bug-eyed, puckered-lips" expression and carries it all throughout the issue).

But to talk about the elements of the artwork that I enjoyed: Pitarra's obsession with details, while it leads his characters to look like they stepped out of a Klasky-Csupo cartoon, gives you plenty to look for in the environments.  Wyrm being made of random trash means he's constantly morphing and shedding weird odds and ends like rubber duckies, balloons, baby dolls and jars of pickles.  His lair is really fun to search through, not just for the TMNT Easter eggs, but all the strange knick-knacks scattered everywhere.

As for the back-up, I'm guessing this serial is going to give us the origin of Jennika.  And she could sure use one.  She's been getting a lot of attention in the ongoing series, but she hasn't developed any strong bonds with the cast or, fuck, a PERSONALITY.  We've been told to care about this character, but it's long-past time we learned WHY.  At 4 pages, we don't have much to go on yet, but maybe it'll turn out to be something interesting.  Revel's style is maybe a bit bland and typical (not bad, but it doesn't pop), but I appreciate that he isn't afraid to use a lot of panels in his layouts.  The constant back and forth between the present and the past, each with a green and pink overlay, respectively, gives it a sort of hectic, stream-of-consciousness flow that befits the narrative text.

Anyhow, I enjoyed this one-shot quite a lot.  It maintained all the best aspects of Wyrm as a character while doing work to define him as his own individual and not a shady knock-off of Bloodsucker.  And it does so without going so far away as to enter in-name-only territory ala the Nickelodeon Wyrm.  Good stuff.