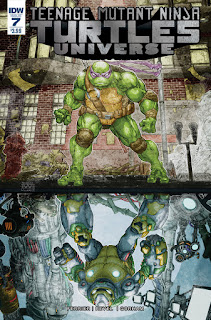 In his lab, Donatello puts the finishing touches on the rebuilt Metalhead and activates him.  Metalhead reverts back to the original defense-mode Harold had programmed him with and attacks, but Donatello shuts him down with a new code word.  The other Turtles charge in, having heard the commotion, and ask why Donnie would be rebuilding Metalhead, anyway.  Donnie explains that since Harold has parted ways with them, he has to fill the void by improving his tech abilities. 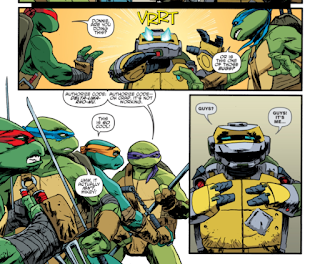 Suddenly, they're all shocked when Metalhead speaks... and identifies himself as Donatello!  After a round of questions, Donnie determines that while his mind was in Metalhead's body, the computer made a data backup of his memory.  Metalhead is disturbed by this, being a "copy", but Donatello tries to calm him down, repeating what the Fugitoid had once told him about the nature of the soul and technology.  He's not the real Donatello, but he's not just a copy, either; he's a unique being. 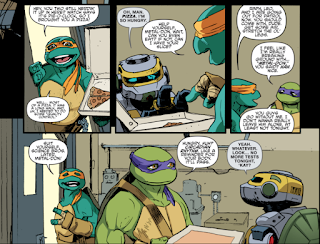 Donnie runs some memory tests on "Metal-Don" (as Michelangelo dubbed him) and learns that the robot has most of Donatello's memories, but they're hazy and he can't access them all clearly.  Metal-Don still feels like little more than a copy, but Donnie tells him about the time he met himself in the future.  He thought that his future-self was nothing like his present-self and could see that every individual, even seemingly identical ones, has the potential to grow and change into wholly unique entities.

Elsewhere, the other Turtles are out on patrol and discussing the Metal-Don situation.  Raphael and Leonardo don't trust him, but Michelangelo insists that he's a living being and not just a copy. 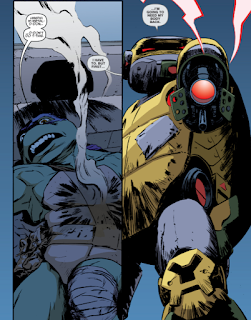 Back in the lair, Donnie overhears Metal-Don talking to himself, but Metal-Don makes a hasty excuse that he was just accessing archives.  Donnie suggests that they go out on the town to help them think and Donnie takes Metal-Don to all the places he knows he'll like.  They visit the Central Park Zoo, but Metal-Don flips out when he sees a rhinoceros (remembering the time Rocksteady smashed the real Donatello with a sledge hammer).  He kills the rhino, thinking it better dead than imprisoned, and states he wants to free himself from his own cage.  Metal-Don blasts Donatello before he can shut him down and demands his body back.

From a rooftop, Jennika (in her Foot Assassin garb) watches Donatello as he escapes a Government building, tailed by EPF probes.

She remembers back to when she was a troubled youth and fell in with a bad crowd.  Her "friends" convinced her to help with a string of robberies, but she had misgivings.  Eventually, one of the robberies went south and her friend shot the clerk.  They left her behind as she tried to help the clerk, leaving her for the police. 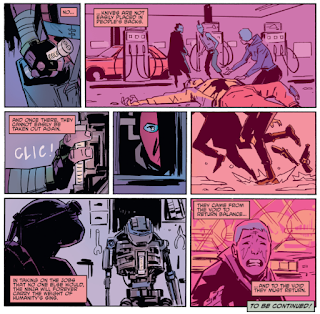 Back in the present, Donatello escapes the EPF probes and agents, unaware that he's still being tailed by Jennika.  She watches as he takes a part he stole back to his lab and installs it in Metalhead, still in the process of being rebuilt.

*This storyline takes place just prior to TMNT (IDW) #67.

*Metalhead's malfunctioning defense protocols were seen in his first appearance in TMNT (IDW) #34.

*Harold had his falling out with the Turtles in TMNT (IDW) #64.

*Donatello and the Fugitoid had their talk about the nature of the soul in TMNT (IDW) #20.

*Donatello met his future-self in TMNT: Turtles in Time #4.

Alright, Metalhead's back and he's his own character!  Sorta.

Metalhead hasn't appeared in too many pieces of Turtle media, but the ones he has shown up in have been surprisingly consistent with his portrayal.  He starts out as a remote-controlled drone, but gradually develops a personality and life of his own.  The different mediums have tackled it in different ways, of course.

The Fred Wolf cartoon had him download the personalities of each Turtle and then go bonkers as he scrolled through them all, ultimately settling on something more unique (though the show dialed him back to a remote-controlled drone in his second appearance).  The Nickelodeon cartoon did it with more care, having him start out as a drone that gets hijacked by the Kraang, only to develop sentience before sacrificing himself to save the Turtles.  Different executions to be sure, but you can see where they intersect.

"Metalhead 2.0" builds on a lot of continuity in the series to get the character where he is (as his own character), but not just the storylines revolving around Metalhead.  There are callbacks to his first appearance as a malfunctioning sentry drone, and of course most of the plot is derived from Donatello's time spent trapped in Metalhead's body, but author Ryan Ferrier mixes in other callbacks that complement the story arc.  Things like Donnie rebuilding Metalhead because Harold has cut ties with the Turtles, and especially the reference to Donnie's conversation with the Fugitoid about the nature of the soul during "Krang War".  This story feels like the organic sum of many different parts and if you've boned up on your IDW Turtle lore, it'll all feel like intuitive payoff.

This half of the two-parter is a bit slow and talky, so I'm expecting the action to be packed into the finale.  If you HAVEN'T boned up on your IDW Turtle lore, then yeah, you might find this issue to drag quite a bit.  It certainly is reference heavy and most of the page space is reserved for two Donatellos pontificating back and forth about science and philosophy.  It's fine setup, but nothing for newcomers.

I am curious to see where they take "Metal-Don", as he seems to be called now.  I've always liked Metalhead as a unique character with his own motivations and personality, so I'm hoping he doesn't get shut down and thrown into storage like the other incarnations of Metalhead (the cartoons have all been quick to write him out).  His evolution in the IDW series has certainly been the most complex and involved.

Adam Gorham is a familiar face to the IDW TMNT comics, having done loads of variant covers in the past.  He also inked The X-Files/TMNT Conspiracy, if you can remember that thing.  His aesthetic certainly doesn't go for the "cute" approach that a lot of the IDW artists aim for, which is good if you're sick of that sort of thing.  In fact, there's something about the way he draws the faces of the Turtles, the large eyes and the way their mouths emote, it reminds me of the first two live-action TMNT films.  It isn't a dead-ringer for the Jim Henson aesthetic, but it's just a "vibe" I got.

Gorham's layouts are good and his inking is excellent (very dark and moody), though I still can't gauge his action sequences, yet.  Mostly since, as mentioned earlier, this issue doesn't have any real action sequences to speak of.  Hopefully we'll get to see more of that next month.  He does add a lot of panache to sequences that would otherwise be mundane, so I've got my hopes up.

The back-up is still running down the origin of Jennika.  Personally, I don't have much sympathy for the "don't blame me, blame my upbringing" and "it's not my fault, I was coerced into crime by stronger personalities" excuses.  She's still a bad person no matter how much of a sob story she weaves.  I didn't mention it in the summary, but she frames her narrative with a long-winded essay about the origin of the samurai and the ninja.  It certainly livens things up, even if it's full of bullshit ("bushido" was not a code of honor in the age of the samurai, but a piece of nationalist propaganda created in the early 20th century by the Imperial government; also, samurais were more along the lines of village-raiding, peasant-raping thugs than noble warriors).

I do like Revel's hectic layouts a lot; a bunch of oddly stacked color-coded tiles that denote the past and the present.  Also, the image of Donatello being chased by the EPF and using stolen parts to rebuild Metalhead at least gives us a loose idea of when this story takes place.

This half of "Metalhead 2.0" is perhaps a bit too talky, but if you've been invested in the IDW series since the start, you'll appreciate all the references and how each little story element helped us get to where we are.