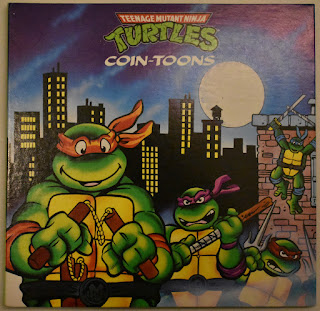 Down in the sewers, Michelangelo finds a trail of spare change littering the tunnel and begins to greedily collect the moolah.  Little does he know, the coins were left there by Leatherhead, who springs on him as soon as he rounds a corner. 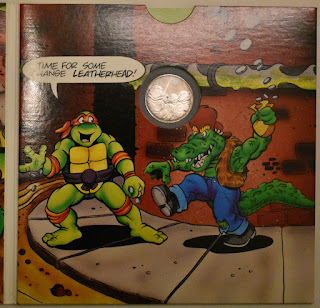 Leatherhead's ambush has unintended consequences, as he slings the coins from his pouch into the air as he pounces.  Or maybe Michelangelo throws some coins at him?  It isn't exactly clear how they got there, but the coins land in Leatherhead's face, uh, defeating him?  As Leatherhead crumbles into unconsciousness because a nickle hit him on the snout, Mikey reminds him that "a penny saved is a pizza earned."

I imagine both characters keep this comic off their resumes.

*Although the ending says "to be continued" and the book has a "series 1" designation, I have never seen hide nor hair of a second volume of TMNT Coin-Toons.

*The credits in the book mistakenly ascribe the artwork to Kevin Eastman and Peter Laird.  I think we can all tell this didn't come from their pencils.  It looks closer to the merchandising and Archie Comics artwork provided by Ryan Brown and Steve Lavigne.

*The collectible TMNT coin embedded in the last page of this book was made of .999 pure silver, 1/4 troy ounce.  It was also forged from waste silver, chemically extracted from trashed Kodak products, as Chicagoland Processing was a recycling wing of the Kodak corporation.  You can thank Reddit for that nugget of history.

*Special thanks go out to Technodrome Forums user "Mechapod" for sharing the scans of the comic with me!

I know I shouldn't be reviewing a piece of piddly little shit like this right now.  There's an IDW comic from last week that I need to get to and another one that just came out today... But god dammit, I'm really sleepy.  Just enjoy this review about whatever the Hell this thing is.  Some sort of folder/picture book with a coin at the end?  I dunno, I just need an easy review today.

For what this is, it isn't so bad.  It has the same minor amusement factor as those Ralston/Purina TMNT Cereal comics or Warriors of the Forgotten Sewer.  We get to see an Archie-style Leatherhead playing a villain, which was something we'd only gotten for one issue of the TMNT Adventures comic, and that's worth a place in the TMNT Entity archive.  Yeah, Leatherhead gets defeated when spare change lands in his face, but... Wow, I wrote myself into a corner with that sentence.  I'd better bail on this paragraph.

As a product, turning the folder/showcase into a TMNT comic was a neat way to get kids to take an interest in a commemorative coin which in any other context would most assuredly have not been on the cooler side of the birthday presents.  This was more of a "grandma gift" that was delicately guided by your parents pointing granny in the right direction.  If the old bag was absolutely hellbent on getting a quarter-ounce of precious metal to teach you the value of diversifying your portfolio, at least this way you'd get a Ninja Turtle comic out of it.

If the Turtle Tips didn't spell it out, I'm honestly clueless on how many of these were produced.  Hell, from all I've been able to dig up, this is the only one that might exist.  I imagine Chicagoland Processing might have had designs on doing one book for each Turtle (buy all four and you get a FULL ounce of silver!), and that may have been what happened, but thus far the internet has only yielded images from the Michelangelo/Leatherhead Series 1 booklet.

Well, I sure half-assed the shit outta this one.  I'll get to those IDW books this weekend.