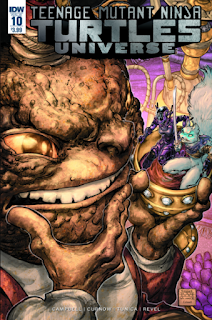 In the Den of Delights, Angel and Alopex search for somebody, ANYBODY who isn't having a good time.  Unfortunately, nobody wants to leave because all their desires are instantly catered to.  The pair are about to give up on escape when a frog orgy snaps them to their senses.  Alopex suggests that Toad Baron uses delights as a distraction and that if they want to find a way out, they need to focus on what's important.  Angel remembers the time a drunk driver killed her mother and finds the incentive to press on.  Together, they come up with a plan. 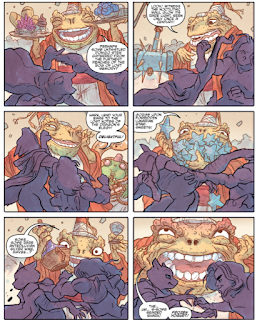 Elsewhere, Toad Baron is preparing more feasts when he overhears Angel and Alopex complain about how boring the party is.  The pair decide to pass the time by sparring since there's nothing better to do.  Toad Baron attempts to get their attention with a string of exotic delights, but they ignore him completely.  The crowd, seeing Angel and Alopex, immediately take an interest and ask if they can join in the sparring match, likewise ignoring the entertainment Toad Baron has orchestrated.

Trying to accommodate his guests, Toad Baron immediately brings out weapons so that they can engage in a spectacular battle.  This only results in the Den of Delights being trashed as everyone goes nuts at the encouragement of Angel and Alopex.  Infuriated, Toad Baron opens up a portal and kicks the pair out.  The remainder of the guests ask to stay in the Den of Delights and the Toad Baron permits it, but immediately puts them to work fixing everything so as to be ready for the Feast of the Pantheon. 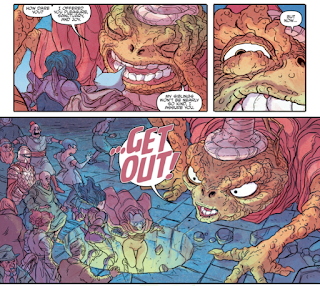 Back in Northampton, Angel and Alopex make it back okay, but find that only two hours have passed.  They camp out at an abandoned mill and awkwardly tell one another they're best friends.  Going over the GPS tracker in her Nobody gauntlet, Angel discovers that it kept coordinates on the Toad Baron's dimension.  Alopex suggests they use that data to go back to the Den of Delights and spy on the Feast of the Pantheon.

Down in the lair, the Turtles and Alopex watch Pepperoni sleep and wonder what she's dreaming about.  In her head, Pepperoni dreams of mutating into an anthropomorph and going on adventures with the Turtles. 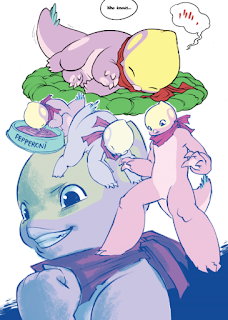 Later, Pepperoni wakes up and gets the crazies.  Grabbing a sai in her beak, she runs circles around the lair, interrupting Raphael's and Alopex's Gamera movie marathon.  The two wonder why Pepperoni always gets so worked up after naps.

*This storyline will continue into TMNT (IDW) #71.

It's always nice when a story cuts you off at the pass just when you think you're about to pull the rug out from under it.  Like, something happens and you think, "Wait a minute, that wouldn't work because..." then the comic addresses your exact concern and resolves it.  It doesn't sound like a big deal, but try and catalog all the plot holes you've had to mull over because a writer DIDN'T think hard enough about it.

And that's what happens in this issue when Angel and Alopex concoct their scheme to escape the Den of Delights by starting a fight.  I immediately thought, "How would that work?  Wouldn't the Toad Baron just accommodate his guests who want to fight because he's the ultimate host?"  And then that's exactly what happened and the protagonists rolled with it and worked Toad Baron's nature against him into ruining his Feast of the Pantheon.

It was nicely structured and paced, making for a fun sequence where the characters turn things around on a villain they can't actually fight... but still do it by fighting.

As for the script, it could have used a little polish and that probably has to do with it having been written by artists and not dedicated writers.  The vocabulary is great, especially when Toad Baron starts rattling off his alien delicacies, but the interpersonal dialogue between Angel and Alopex is out and out lousy.

Okay.  Shit.  We get it.  They're best friends.  Thanks for taking time out in your dialogue on multiple occasions to exposit that to audience.  We'd have never picked up on it, otherwise.

There's also the problem where a conflict is resolved by "REMEMBER WHO YOU ARE!" and that well has been run dryer than Betty White's box by the IDW comics at this point.  So many conflicts in this book have been overcome by "REMEMBER YOUR FAMILY" and jeez, I can't be the only one who might be getting a little sick of it.

But that's okay, because holy shit is Tunica's art some fun stuff.  A few folks in the comments section of the last issue remarked that it reminded them of the Ghibli film "Spirited Away" and I'm sure that was an inspiration.  It didn't come to mind for me immediately because I've only seen that movie once and it was probably more than ten years ago (I'm not an anime guy).

Beyond the onslaught of details and stuff going on in the crowds, what Tunica sells is how everything is always, ALWAYS in a state of motion.  There is no sitting still in this comic, save for the brief moments of normalcy between the two leads, and the Den of Delights is a nonstop madhouse of revelry.  Toad Baron, too, is intensely animated and he always looks like we're catching him in a weird frame.  He's perpetually in action and rarely looks like he's posing, except for a couple panels where he's pouting and it fits the sequence.

The backup was cute.  I dunno when Alopex found the time to become friends with Pepperoni (Angel even crudely mentions how much Alopex and Pepperoni like each other in the main story), but it doesn't matter so much.  Pepperoni waking up and getting the crazies was my favorite part; reminds me of a few cats I've owned.  Hoping this was just a gag and not foreshadowing, though, as I like Pepperoni the way she is and wouldn't want to see her mutated.

The Toad Baron storyline was pretty good all around.  The script needed some work, but the artwork will most likely distract you from how sloppy the dialogue is.  So far, TMNT Universe has really been killing it.