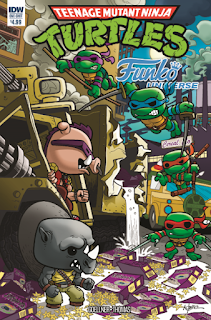 Down in the lair, the Turtles are out of pizza for breakfast, but Michelangelo has the unexpected solution: Rice Shreddies, a brand new cereal!  Actually, he just bought it for the decoder ring prize inside, but after fishing through the box, Mikey finds he's been ripped off!  The Turtles aren't about to take this sitting down and head to the cereal factory to demand a prize (leaving poor Splinter to clean up their mess). 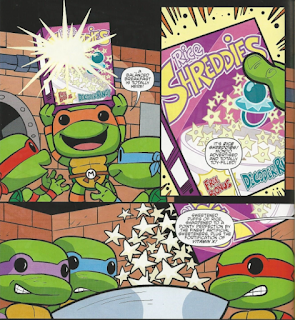 Meanwhile, at the cereal factory, it turns out that Rice Shreddies are the creation of the Shredder and Krang.  Having "fortified" the cereal with Vitamin X, it will poison the children who eat it with a mind-controlling serum that will be activated once they slip on the toy decoder ring.  Suddenly, there's a knock on the door and Krang orders the Foot Soldiers (disguised as factory workers) to send whoever it is away.

It's the Turtles, of course, who proceed to storm the factory at the sight of the Foot Soldiers.  While Bebop and Rocksteady keep the TMNT distracted, the villains load up the "Trucknodrome" with cereal so they can deliver it to the grocer.  The Turtles dump a vat of cereal onto the Foot Soldiers, stopping them, but the bad guys escape in the Trucknodrome. 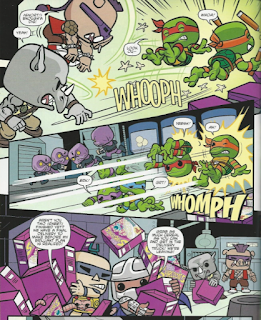 The Turtles pursue the Trucknodrome in the Party Wagon (nearly mowing down Casey Jones and April' O'Neil along the way), but they're constantly being blinded by the boxes of cereal Bebop and Rocksteady are chucking at them from the back of the truck.  In the back of the Party Wagon, Raphael is disturbed to find that Mike has bought hundreds of gallons of milk for a milk-drinking contest, but the revelation gives Donatello an idea.  Leonardo and Mikey load the milk into a bomb container and chuck it at the Trucknodrome.  The explosion destroys the Trucknodrome, turns the cereal into goop and sends the villains blasting off into the sky. 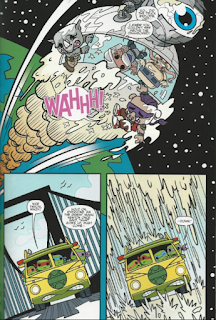 A job well done, Michelangelo surfs the soggy Rice Shreddies until he finds his decoder ring prize.  Alas, it was designed for a human finger, not a mutant turtle's, and he cannot wear it.  Just then, the four baddies come crashing back down and the Turtles subdue them with a ninja net.  The morning saved, they decide to go get some pizza for breakfast.

*This issue was released as part of a 5-issue series of one-shots involving IDW titles getting the "Funko" treatment.  Other Funko Universe titles include The X-Files, Ghostbusters, Judge Dredd and Strawberry Shortcake.

*As you likely know, the Funko Pop! Vinyl collectibles are very popular.  The Turtles got the Funko merchandising treatment several years prior to this one-shot's publication.

*This issue was originally published with 3 variant covers: Regular Cover by Nico Pena, Subscription Cover which is a photo of a Michelangelo Funko Pop! Vinyl collectible, and Retailer Incentive Cover by Jamal Peppers and Ronda Pattison.

I'm always surprised by what little TMNT odds and ends IDW publishes on the downlow, because those seem to wind up being some of the their best output.  As I mentioned before, I had next to no hype for the Carmelo Anthony Special, but that wound up being one of their funniest releases. Likewise, I had no expectations going into the TMNT Funko Universe one-shot, but it resulted in one of the best comics I've read this week.

It's essentially an episode of the 1987 TMNT cartoon, but rendered through the prism of the Funko Pop! Vinyl merchandising line.  While a more traditional Fred Wolf TMNT aesthetic would have been better, the only reason this thing even EXISTS is because IDW is doing a merchandising cross-promotion with Funko, so let's all just be satisfied with the compromise.

Writer Caleb Goellner, who has done lots of work on the TMNT Amazing Adventures series based on the Nickelodeon cartoon, handles the script for this one-shot.  He's mostly done short back-up strips in that title, but he transitions to a full-length story really well.  He captures all the character nuances in the dialogue and even if the characters don't LOOK identically like their Fred Wolf counterparts, you won't have any trouble hearing their voices in your head.

The plot is typical 1987 nonsense, and I like it for that, but I do wish Goellner had maybe refrained from having the characters all stop and reflect on how the evil scheme makes no sense or how silly everything is.  After "Turtles Forever" and "Trans-Dimensional Turtles", I think the gag where everyone points out how weird and silly the Fred Wolf era was is getting a little stale.  Part of the humor in that show was how matter-of-fact the characters were about the inherent insanity of their predicaments; constantly pointing it out is becoming a tiresome exercise.

That said, Goellner captures the voices and a lot of the humor comes from the dialogue.  I think I laughed more at how authentic so much of it sounded as opposed to the quality of the jokes.  Raph's sarcastic asides, Shredder and Krang's bickering, all the puns... It has a sincere David Wise-ness to it that will sort of charm you into a smile, at least if you have any nostalgic affinity for the 1987 show.

References and in-jokes abound throughout the story and might get a little obnoxious by the time Shredder starts quoting his song from The Coming out of their Shells Tour.  Funniest thing is that the subtlest Easter egg is the one relating to the ACTUAL TMNT Cereal that Ralston-Purina produced back in the '90s.  The "ninja nets" the Turtles use to capture the villains at the end are a reference to the cereal pieces by the same name (which were really just Chex).  Odd that the writer decided to be so coy about the one thing most relevant to the plot of this comic.

Nico Pena's art is very cute and manages to take the static Funko Pop! Vinyl figures and put them into dynamic action sequences and slapstick comedy.  If you've ever owned one of those things (and let's face it, you probably do; I don't know where they come from but everyone seems to wind up with several out of nowhere) then you know that they aren't so much "toys" as they are "figurines".  They certainly aren't articulated or expressive.  But Pena makes the character models work and this doesn't look anything like a hastily thrown together licensed toy tie-in.  The folks making it really wanted to create a good story starring the Fred Wolf TMNT and I'd say they did it.

In fact, it leaves me wishing IDW would do more with the other versions of the TMNT beyond their homegrown incarnations and the Nickelodeon series.  Maybe something similar to the 30th Anniversary Special, like an anthology series containing stories featuring different versions of the TMNT, be it the Mirage ones, the Fred Wolf ones, or the 4Kids ones.  IDW clearly has writers and artists who are excellent at capturing the many different incarnations of the Turtles, so it'd be fun to see them utilized more often.