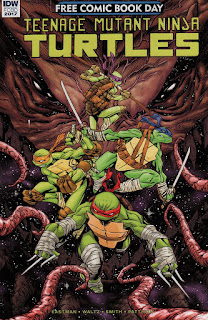 In the sewer tunnels, Leonardo, Michelangelo and Raphael are running a training routine with several laser cannons being operated by Donatello and the Fugitoid.  They all get blasted and return to the lair to take a rest.  There, they catch up with Professor Honeycutt (Fugitoid) and fill him in on everything they've recently been through with the Foot Clan, the Pantheon, Leatherhead, the Mutanimals, Agent Bishop and so on. 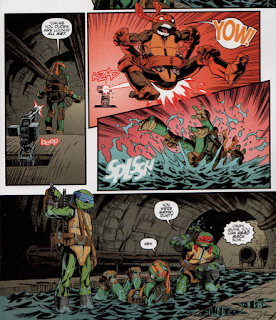 The Fugitoid is happy to see them again, but confesses that he must return to Burnow Island and then teleport back to Planet Neutrino in Dimension X.  King Zenter has asked the Fugitoid to join Commander Dask in persuading five key witnesses in testifying against General Krang in his upcoming trial.  The Fugitoid fears it won't be an easy task, as Krang's influence has a far reach and he may try to get to the witnesses before he and Dask can help them reach safety. 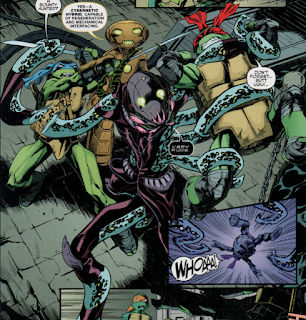 Suddenly, the lights go out and the Fugitoid is attacked a hooded, tentacled, cyborg alien.  The Fugitoid recognizes the alien as a bounty hunter named Hakk-R, often employed by Krang.  Hakk-R uses his tentacles to download data from the Fugitoid's skull and then proceeds to whip the Turtles around.  Donatello manages to subdue Hakk-R with an impromptu blowtorch, but having procured what he was sent for, Hakk-R teleports to safety. 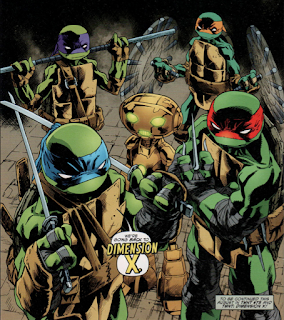 The Fugitoid reveals that Hakk-R downloaded the locations of the five witnesses against Krang and is no doubt on a mission to eliminate them all.  Not about to let Krang walk off scott-free for his evildoing, the Turtles promise to go to Dimension X with the Fugitoid and save the witnesses from Hakk-R.

*General Krang was defeated and taken into Neutrino custody in TMNT (IDW) #44.

Following IDW's so-far-schedule of skipping a year, we've got our third FCBD release for TMNT, and like last time, this one helps set up an impending story arc.  Two of them, actually: The Trial of Krang arc in the ongoing and the Dimension X companion miniseries.  Not sure yet how those two are going to intertwine and I won't be finding out until, like, August or something.  So we got plenty of time.

But hey, it does its job of getting us dedicated readers hyped for the big event storyline while also getting new readers up to speed with a four-page recap sequence.  The recap is graceless, but a necessary evil.  I suppose my only complaint for this part was that the narrative captions are supposed to be color-coordinated, but they used a blue-for-Leo and a purple-for-Donatello that were way too close in shade.  It might have just been an issue with my printing, but half the time I couldn't tell which one of them was supposed to be talking.

Cory Smith is back after an extended absence and I look forward to seeing him on the ongoing (or the mini; I hope he's in at least ONE of those).  He was a great alternate for Santolouco back during "Vengeance", but he's given his style some individuality if this FCBD one-shot is any indication.  It makes sense; he was leap-frogging with Santolouco on "Vengeance" so naturally he'd try to keep a consistency with his alternate, but this time around he's free to draw in a style more his own.  It looks good and he adds some cartoony effects like spinning birds around a dazed Donatello's head that I can't help but love.  Pattison's colors are lovely, too, and altogether this has the production values (and nearly the length) of a $4 issue of the main series.  Not bad for a giveaway!

The new villain introduced, Hakk-R, has a stupid name but a cool design.  We'll see how he works out in August.  Despite his fearsome appearance, he speaks very casually and I liked the juxtaposition (he's not playing up a scary monster routine, which would have been fairly cliche).

As for those of you asking the usual question, "If I didn't get one of these, will I be missing anything?"  Well, August is still a while away, but it looks like a rather important event setting up the storyline happens in this FCBD issue.  So... Yeah?  I mean, I'm sure they'll recap it in the ongoing or whatever, but it's certainly not skippable.  But I'm sure you can snag one of these on the aftermarket, even if you have to pay for it (sorry).