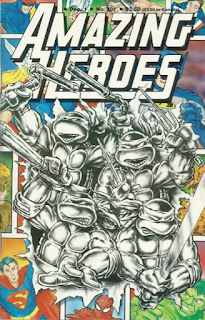 *Turtle Boys (interview with Kevin Eastman and Peter Laird, conducted by Thom Powers with an introduction from Mark Waid)

*The Mirage Studios two-page spread seen at the opening of the interview was originally done for the Fantagraphics title New Age, but went unused for that publication due to its cancellation.  It would eventually be reprinted in TMNT (Vol. 1) #15.

Well, it's another one of THESE things, though I think I'm finally nearing the bottom of the random indie books the Turtles appeared in throughout the '80s.  By God, I have to be.

This appearance doesn't feature any comic material, only an interview, but it does offer some original art that was new at the time.  The cover is especially interesting, as you get to see Laird's renditions of a number of mainstream comic book characters like Superman, Batman and the Hulk.  There's also this one piece that I'd never seen before (by Peter Laird and Ryan Brown), Leonardo vs. a Xenomorph from Alien: 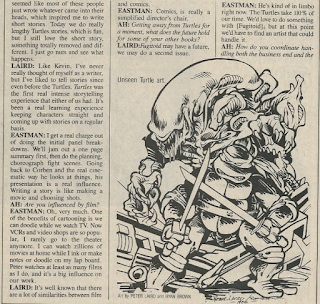 Think of it as a sequel to the cover from Anything Goes #5 that merely hinted at an encounter between the Turtles and the Aliens.

Though it's funny, seeing all these trademarked characters and IPs like Superman, Spider-Man and the Aliens being used by Eastman and Laird for crossover and satire art, all without permission.  It's a reminder that this was 1986 and the TMNT weren't on the mainstream radar yet.  Marvel, DC and 20th Century Fox couldn't give a shit if some nobody indie comic was using their characters for covers and insert artwork.  But let's see the Turtles try to get away with swiping those characters NOW and see what happens.  Lawsuit city.

Coming out in '86, there's a quaintness to the interview, as the Turtles were still a year away from hitting it big with their cartoon and toyline.  Eastman and Laird's egos are still fairly grounded and their boasts are extremely modest.  The interviewer asks them about their success in licensing and the pair gush over how exciting it was to get those Dark Horse pewter miniatures.  Like I said, "quaint".

If you've ever read an Eastman or Laird interview then there aren't many insights here that you won't find elsewhere.  They tell the same stories and answer the usual questions in their alarmingly consistent way ("Who are your inspirations?"  And they always, ALWAYS say Miller, Bode', Corben and Kirby).  The interest comes more from their attitudes being more terrestrial, a year before they were rocketed into multi-millionaire status and transitioned from artists to businessmen.

But that's all there really is to this thing.  It's a trade magazine that specializes in indie books, so the other features can be fun/bewildering to page through.  You'll find a few titles that withstood the test of time, like Elfquest, but the majority of this stuff is straight up "not even a Wikipedia article" territory.

Anyway, take this along with the Turtlemania one-shot and the earliest Palladium RPG sourcebooks, all of which were released in that 1985-86 timeframe, and you'll come away with a fairly colorful image of what the Turtles were like in that brief window between introduction and superstardom.  It was a time when the most exciting thing going on in the "franchise" were pewter miniatures.