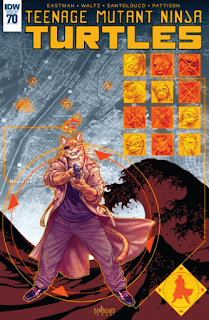 At the ruins of Stockgen, the Turtles, Sally and Mondo lay in wait in the brush, waiting for Hob to make his move (as indicated in a message he sent them earlier).  Bishop and Dark Water arrive with both ground and air support as Hob steps out of the ruins with his two hostages: Bishop's father and Colonel Knight's wife, Pam.  Holding them at gunpoint, Hob demands the immediate release of the Mutanimals. 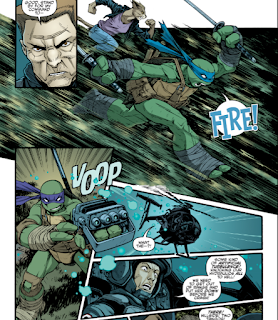 Enraged, Knight confronts Hob, but the Turtles take out his snipers and chopper backup (thanks to Donatello and one of Harold's old anti-gravity gauntlets).  Before the negotiations can go any further, Bishop unleashes the mind-controlled Slash who stomps the opposition.  Speaking through Slash, Bishop goes on a paranoid rant and the mercenary Knight realizes that his employer has a screw loose.  Hob informs him that Bishop has been keeping secret files on all of Dark Water, which is how he got the information about his wife.  Knight signals Sergeant Winter, who pulls a gun on Bishop and forces him to power down Slash. 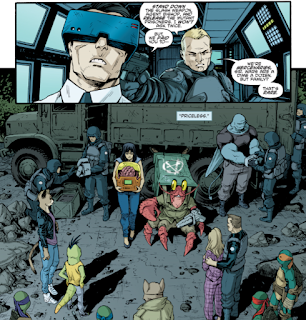 The Mutanimals are set free by Dark Water (though Mutagen Man has been reduced to a head in a jar, Herman has received a cybernetic pincer).  Dark Water then leaves, abandoning Bishop to his fate at the hands of the Mutanimals.  Bishop isn't out of tricks and contacts Dr. Shevlin, who reactivates his neuro-link with Slash.  Hob takes a gun to Bishop's father and threatens to kill him unless Slash is released.  Bishop reveals that he thinks his father truly died years ago and the senile old man in the wheelchair is just an empty husk.  To prove his contempt, Bishop has Slash stomp his father to death.

Enraged, Hob claws half of Bishop's face off, revealing that he's actually a cyborg.  Bishop tries to regain the controls for Slash, but Leo chops off his cybernetic hands.  With the police on the way, the Turtles and the Mutanimals are left with no choice but to leave Slash behind with Bishop.  The Mutanimals flee in the stolen military vehicle while the Turtles escape in Hob's old van. 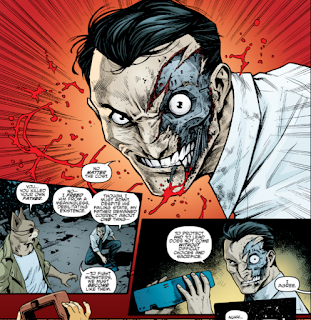 Hitting the highway, the Turtles tell Leo that they're impressed with his plan and how well it worked.  Leo says that it's his duty to keep "Clan Hamato" together.  He then asks Donnie if he has any new tech ideas up his sleeve.  Donnie says that their new van is giving him some ideas.

The departure of Dark Water from the narrative was sudden and, I dunno, I don't think I'm going to miss them.  With the EPF and all those government resources at his back, I'm not sure why Bishop needed them in the first place.  They didn't amount to much other than a means to provide a convenient out for (most of) the characters.  Who knows if Knight and Winter will turn up later, but I won't shed any tears if they don't (though Winter's betrayal might make a good catalyst for Bishop capturing him, experimenting on him and turning him into Megavolt, ala his Fred Wolf cartoon counterpart).

Bishop being a cyborg provided a nice visual surprise.  He's always been more than human in his other incarnations: His 4Kids version was functionally immortal and bled green while his Nickelodeon counterpart was an Utrom in an exo-suit.  Making him a cyborg seems like a middle-ground between the two other versions, making him an enhanced human (ala 4Kids) but also giving him robotic body parts (ala Nickelodeon).  But even if you expected Bishop to be something other than a normal dude, the way Santolouco framed the reveal had some real startling power to it (for the audience, I mean; the characters don't comment on nor seem to give a shit that he's revealed to be part robot).

The climax to this issue confirms the IDW Bishop as being far more villainous than his other interpretations, who both became allies to the Turtles toward the end of their respective cartoons.  I don't see this lunatic Bishop joining forces with the TMNT anytime soon.  Still, even when he's committing patricide, there remains that glimmer of "heroism" to the character.  He really is just trying to keep his country safe from an external threat.  He's just a paranoid, geriatric-stomping nutjob about it.

How Hob steps away from this storyline leaves him in an interesting place.  Though he didn't kill either of the hostages, he was pretty damn vicious about (dragging his claws across Pam's neck, drawing blood).  And yet, you're still left wondering if he really would have pulled the trigger on them.  By the time Bishop starts rambling like a madman and the crisis reaches a fever pitch, Hob transitions from a cruel negotiator to somewhat pleading with Knight to see reason and walk away from everything.  The execution keeps Hob firmly entrenched in that grey area where he does some REALLY shitty stuff, but he never goes quite far enough to become a legit villain.

As for the Turtles, they walk away from this arc with a few changes.  Leo's gotten comfortable and confident as the sole leader of "Clan Hamato".  While it seemed like a bit of an artificial form of growth, as we've seen Leo come to terms with the burden of leadership so many times, I guess the context of there being no Splinter to fall back on gives this go-around some extra oomph.  But if he keeps sneaking off to see Splinter for advice, it's really going to undermine what this story arc was trying to do for the character.

Also, Donnie's got a van and he wants to trick it out.  To be frank, I'm a little surprised the IDW series has taken seventy issues to get to the Turtle Van/Party Wagon (or at least sewn the seeds for it).  Admittedly, the van has always been one of the more impractical and toyetic aspects of the brand, but even the Mirage TMNT had April's Volkswagon, so it is something of a staple.

So I don't have much to complain about with Desperate Measures.  In many ways, it was paced better than most IDW arcs, spreading the action out with each chapter instead of clumping it all in the back end.  But it also has some spontaneous, awkward exposition cluttered together in the first half, like Bishop's weird oration about his father or Knight taking a phone call from a wife who never existed until she was needed to facilitate this climax.

If Desperate Measures didn't do it for you, then the next two arcs look to run the remaining gamut of the IDW TMNT-verse.  There's a two-parter with the Pantheon followed by a four-parter with General Krang.  I'm especially looking forward to the latter.