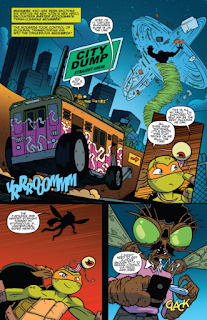 In the Shellraiser, the Turtles and Joe Eyeball arrive at the city dump (with Baxter Stockman secretly tagging along).  They're too late and Muchmech has begun absorbing all the garbage, growing humongous in size and becoming... Muckmonster! 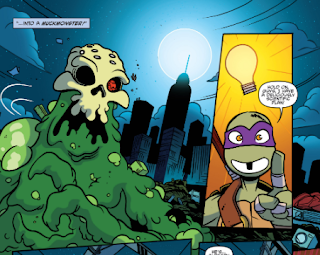 Muckmonster beats a path toward the city, being controlled by Stockman via his remote for the Trashbots.  The Turtles follow in the Shellraiser and Joe suggests that if they can get him close enough to talk to Muckman within, he can give his friend the strength to overcome the Trashbots controlling him. 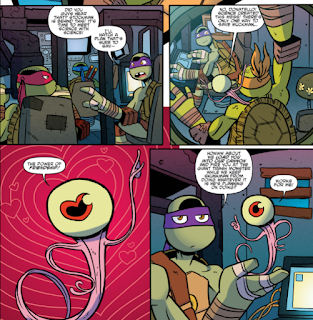 Using the Shellraiser's cannon, Donatello launches Joe into the head of Muckmonster.  Joe gives a rousing speech about believing in yourself and it awakens Muckman, who overrides the Trashbots.  Muckmonster collapses, catching Stockman in a tidal wave of garbage and destroying his Trashbot remote.  The Turtles make amends with Muckman and vamoose just as Joan Grody and her news crew arrive.  She asks Muckman how he defeated the giant monster and he cryptically explains that he "found the courage to take down a growing menace." 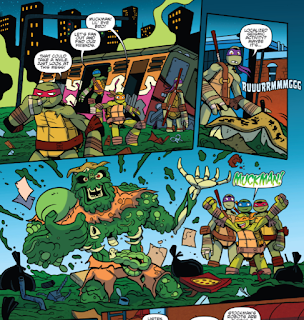 At Foot Clan HQ, Stockman is left to explain his failure to an irate Shredder.  Accepting no excuses, Shredder tells Stockman he will be punished and orders Bebop and Rocksteady to teach him the price of failure.  As soon as Shredder leaves, however, they begin negotiating with Stockman to help them clean up their quarters.

*This story is continued from "Muck Amok, Part One".

Well, that was... something.  Not good, not bad.  Just something.  I liked how it was in color and typed in English.

Okay, I'll try to be more critical if only to get a paragraph or two out of this article.  The script had some funny bits to it, like most of Michelangelo's banter (Goellner seems to have a knack for writing a genuinely funny Mikey) and a few of the exchanges between Donatello and Joe Eyeball.  I mean, I smirked, so that counts as a reaction.

And Chad Thomas's art is as good as it's ever been.  With Amazing Adventures one storyline away from being over, I think my greatest (perhaps only) grievance will be the loss of his art on a monthly basis.  I hope IDW finds a place for him somewhere, even if the Nick-based TMNT comics don't survive much longer.  I'm sure he can adapt to other incarnations of the brand.

But that's about it.  It was a cute and sort of funny story, but light on plot and easily forgotten.  I wish there was more to say about it, but there just isn't.