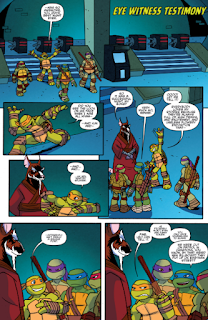 The Turtles return to the lair and are excited to tell Splinter all about the amazing adventure they just had.  Leonardo tries to tell it first, explaining that while they were exploring near the new billboard for Bird's Eye Optometry, they were attacked by the Shredder.  The other Turtles call him out, insisting that's not what happened at all. 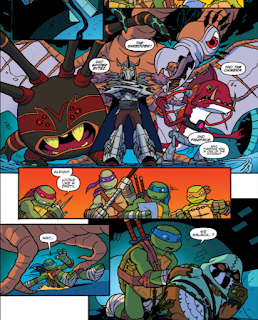 Donatello has an epiphany and says that the only thing their stories had in common was the billboard for Bird's Eye Optometry and its maze-like logo.  With those clues, the Turtles traverse the tunnels to the dwelling of Sir Malachi and find him unconscious.  They help him up and nurse his concussion,

Donnie theorizing that when Malachi slipped and hit his head, he subconsciously sent out a signal to the Turtles as a call for help.  However, due to his psychic mutant powers and love of role-playing fantasy games, they received it as a "puzzle".  As they take Malachi back to the lair, Mikey demands that he be the one to tell THIS story to Splinter.

Not quite as elaborate as the previous back-up story, but it made for a fun way to tell a simple plot in as many ways as possible, even including a slight puzzle for the reader to figure out.  Bonus points for including characters like Spider-Bytez, the Chimera and Sir Malachi, whom the cartoon never saw fit to use more than once or twice.

The artwork from Jamal Peppers is solid but very... on-model?  I say that like it's a bad thing, but it just isn't especially remarkable.  I recognize Peppers mostly from his work on Archie's Sonic the Hedgehog book, which was also solid, but also unremarkable.  He's very skilled at sticking to style guides and aesthetics established by other artists, but he lacks a fingerprint all his own.  I mean, that's not a terrible thing; I prefer substance to style and he has plenty of substance.  But as neat as the script is, the art isn't going to pop out at you.