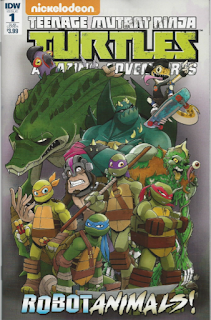 In his temporary lab, Baxter Stockman is complaining that ever since Shredder's "incident", he hasn't had any luck reconvening with the scattered Foot Clan and regaining his resources.  However, he was able to recapture Antrax and Scumbug, which gives him an idea.  Developing a nano-roboticization mist, Stockman successfully turns Antrax and Scumbug into robots.  Next, he sets his sights on the Mighty Mutanimals. 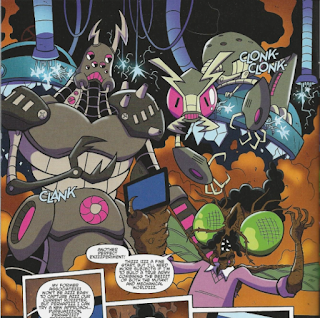 At an abandoned warehouse, the Mutanimals are just about done moving in and getting things ready for the Turtles, who will be coming by with pizzas soon.  There's a knock at the door and it's Stockman, begging the Mutanimals to take him in and let him join their team.  He explains that he created some robot warriors to do his bidding, but they turned on him and he needs help stopping them.  The Mutanimals are incredulous, but decide to give him a chance, seeing as how most of them started out as villains before turning to the side of good and Stockman ought to be given the same opportunity. 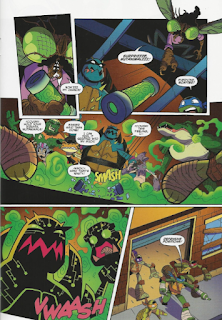 The Turtles aren't happy with the arrangement, arriving with the pizzas and seeing Stockman all buddy-buddy with the Mutanimals.  An argument breaks out, as the Turtles insist the Mutanimals aren't using the best judgment.  Stockman utilizes the distraction and breaks open some canisters of nano-roboticization mist.  The Turtles escape in time, but the Mighty Mutanimals are caught in the mist which transforms them into the Rigid Robotanimals. 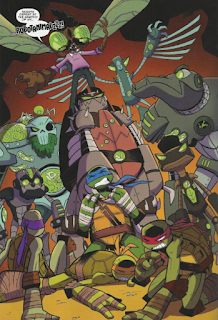 The Robotanimals attack the TMNT, who lead them across the street and into a glue factory.  They try to detain them with the glue, as they don't want to risk hurting their friends, but the Robotanimals are much too strong.  They eventually overwhelm the Turtles and knock them out as Stockman gloats over his impending victory...

*This story is continued from Batman/TMNT Adventures #6.  The story continues in TMNT Amazing Adventures: Robotanimals #2.

*The continuity of where this comic takes place in regards to the TV series is a little jacked.  Baxter says that he has had no luck reconvening with the Foot Clan since Shredder's "incident".  That could be a reference to the grievous injuries the Shredder took in the season 4 episode "Earth's Last Stand" which caused the Foot Clan to retreat from New York.  However, Baxter was shown helping stabilize the Shredder's injuries in "The Insecta Trifecta", the episode that introduced Antrax and Scumbug, so he'd already reconvened with the Foot by then.  It could be a reference to Shredder's death in the season 4 finale, "Owari", which further caused the Foot to fracture, but Baxter was cured of his mutation in that same episode.

*Pete was said to be estranged from the Mutanimals under mysterious circumstances in the season 4 episode "Mutant Gangland".  However, he was shown to have rejoined the team in "Owari".

*Regarding publication date, I got my copy on May 31, but the Diamond listing was for June 7 and that's when most other people got their copies.  So I dunno what the deal was with that.

Man, if Batman isn't involved then it's really tough to get enthusiastic about these Nickelodeon TMNT tie-in comics.  But I guess I won't have to combat my apathy for much longer.  Robotanimals is said to be the last of IDW's Nick TMNT spin-off comics, likely having to do with the cartoon entering its fifth and final season.  I'm sure we'll get another cartoon tie-in book when Nick launches its next incarnation of the brand on TV.  I hope it proves to be more ambitious.

But I'm getting ahead of myself.  Like the Amazing Adventures ongoing and the New Animated Adventures ongoing before it, Robotanimals is not a bad comic.  It's funny and light-hearted and the art and dialogue is enjoyable.  It's just sort of bland.  On the bright side, being a three-issue miniseries, this storyline is actually going to be given the space to develop and take its time.  A shame none of the ongoing books had dabbled in serialized, book-length storylines, instead waiting until an Eleventh Hour miniseries to test the process out.

The story is pretty gimmicky stuff.  Baxter takes existing mutants and turns them into robots, copping technology and even terminology from the old early '90s Sonic the Hedgehog cartoon.  It all comes across like its trying to sell a toyline that doesn't exist.  But Chad Thomas's designs for the Robotanimals are all pretty cool, with Muckman being my favorite.  He's got these glass domes all over his body, displaying swirling pools of garbage, and Joe Eyeball is reduced to a mechanical spider crawling all over him.  He definitely gets the standout look (complete with garbage cannons on his arm).

Incidentally, this is the second time in IDW's Nick TMNT comics that Muckman has been turned into a robot.

I guess I should also point out all the discontinuity regarding Baxter and his relationship with the Foot Clan following Shredder's "incident".  You can't really rectify it; it's just an error.  Though it makes me wish the book had deviated from continuity more often if it facilitated the stories they wanted to tell.  But we're nearing the end zone, now, so there's no point in recycling the same complaints.

Two more of these things to go and we're done.  Let's see if I can summon up the fortitude to give a shit in the coming months.