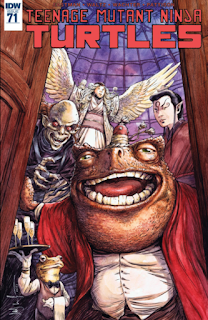 In the Den of Delights, Toad Baron orders his maitre d', Alberto, to finish the preparations for the Feast of the Pantheon.  The guests arrive one at a time and a roll call is issued, as is the custom of their once-a-century get-together.  In order from oldest to youngest: 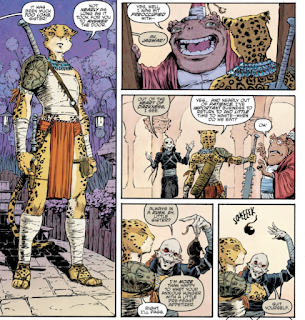 Aka, the wise and rational avian.  Manmoth, the elephantine hunter.  Gothano, the tentacled collector of secrets.  Chi-You in absentia, the orderly but bull-headed conqueror.  Rat King, the ghoulish troublemaker.  Toad Baron, the amphibious purveyor of pleasures.  Jagwar, the impatient feline warrior.  And Kitsune, the tricky vixen. 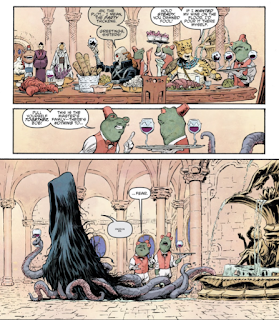 As the meal begins, the siblings try to make smalltalk, firstly wondering where Chi-You has been for five-hundred years.  Rat King seems to suspect that Kitsune knows something about his whereabouts, but she isn't telling.  Gothano whispers that Kitsune has been acting too rashly in her eagerness to prove herself in "the game" and her manipulation of mutants has put them all at risk.  This accusation spurs an argument between Kitsune and Jagwar which has to be defused by Aka.

Kitsune confesses that as the youngest, she has the most to prove and has therefore been playing recklessly.  However, she insists her intentions are noble, though Manmoth fails to believe her and demands she spit out what she's been orchestrating. 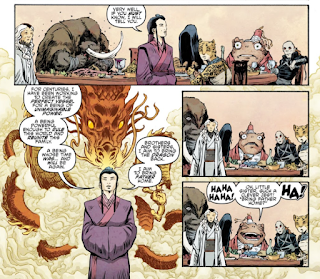 She explains that her manipulation of Oroku Saki was all part of a plan to create a warrior powerful enough to contain the spirit of the Dragon, their longlost patriarch.  Her siblings react with a mix of incredulity, anger and fear that she has been planning on resurrecting their father, but Kitsune says she merely wants everyone to be united as a family again (also the extinction of the human race). 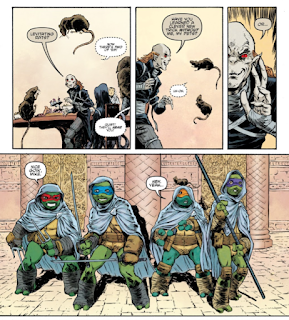 Suddenly, the Rat King hears whispers and notices one of his rats floating in midair.  He waves his hand and reveals the Turtles, who had until that point been invisible thanks to their Street Phantom cloaks.  The Pantheon are none-too-happy about the spies in their midst...

*Angel and Alopex escaped from the Den of Delights with intel on the Feast of the Pantheon and the dimensional coordinates in TMNT Universe #10.  Jagwar was also briefly mentioned in that issue.

*Aka "betrayed" Kitsune in TMNT (IDW) #60.  The Rat King also last appeared in that issue.

*Gothano is a unique character while Manmoth originated from the Archie TMNT Adventures series (likewise, so did Jagwar, albeit that Jagwar was a dude).

This is what a "rewarding" issue feels like.  The Pantheon and their machinations have been simmering in this book since at least 2013 and after 4 years of teasing we still didn't even know all their freakin' NAMES.  The IDW book was running the risk of doing what The X-Files did back in the day: Playing the long game but not giving the audience enough answers along the way to ensure their interest outpaces their frustration.

The truth is that we've actually gotten quite a few storylines where the Pantheon play key roles.  The Secret History of the Foot Clan, TMNT/Ghostbusters, that shitty Casey & April miniseries, and that two-parter where everyone goes bananas.  There has been a trail of breadcrumbs for this nearly half-decade storyline, but even by the standards of crumbs they have been insubstantial.  Most of them only offered the illusion of progressing the Pantheon narrative, when really all they amounted to was a reminder that these characters are plotting something evil, just you wait.

Well shit man, the wait's over and it feels pretty good.  Now, this is just a two-parter and not the grand culmination of the storyline, but it offers ANSWERS.  We get a full roll call of the Pantheon, so no more guessing as to how many members there are or who those members might be.  We figure out their relationships to one another and exactly what their place in the world and "the game" is.  And we finally get an inkling of WHAT exactly Kitsune's infatuation with the Shredder was all about and where she's trying to go with all her manipulations of the Foot Clan.  We have a DESTINATION for these characters and their scheming.  No more aimless wandering on this storyline.

To further that X-Files analogy I jumped to earlier, do you remember the Cigarette-Smoking Man?  Do you remember six years of the Cigarette-Smoking Man and how he'd step into an episode at random, muse that "I know something you don't know but I'm not telling" and then fuck off for a few more episodes before coming back and doing the same thing again?  Six years of that shit?  Well, Kitsune has been the Cigarette-Smoking Man of IDW's TMNT comic.  Four years of her hovering in the margins, smugly grinning and taunting that she has plans in motion, but she's not ready to reveal them.  Four years ain't as bad as six years, but these blue balls haven't been a picnic by any means.

But now we finally got something, SOMETHING, and it feels pretty great.  While the coyness of the storyline has been aggravating (almost as if the writers didn't actually have anything in mind on what the Pantheon was up to and have just been buying time until they could come up with something), if there was any actual progression during the buildup it's been the slow-drip reveal of one Pantheon member after another.  We finally get to see them all collected (minus Chi-You) along with two new members (well, one truly new member and two callbacks to classic franchise characters).

Regarding these new(ish) faces, the niches they've carved out are fascinating and sort of explain why we haven't heard of them in the comic until now.  Manmoth comes off like a recluse survivalist who couldn't give a shit about world events.  Jagwar is said to have the weakest influence of all the siblings, and her status as a soldier is enough to differentiate her from Chi-You, who was more a conqueror (I guess Jagwar likes to fight, but cares not for the bureaucracy of running a nation, hence her lack of influence).  Then there's the mysterious, softspoken Gothano who prefers to lurk in the shadows and amass secrets.  He was my favorite of the new reveals, partly because he was wholly original, but mostly because he's got a sort of Lovecraft vibe going on which was a nice departure from the other members, who all have ethnic or distinctly cultural folk lore elements to them.

Then there's Kitsune's scheme to resurrect the Dragon (hinted at in TMNT #59).  Like I said, it finally gives us a goal post with these people.  We at least know what one of them WANTS; no more of them randomly prancing around, fucking with the protagonists and giggling "I won't tell you why I did it!"  Thank Heaven for that.

Though it adds a weird kink to the relationship between Kitsune and Shredder.  Until now it had been seemingly romantic, but it was really because Kitsune wanted to turn him into her father?  Gettin' a little kinky there, lady.  What's that called?  An Electra Complex?  I dunno, I never really read Daredevil.

While "resurrecting a great evil" isn't the most creative looming threat, I'll take it over endless years of absolutely nothing.  But having endured the machinations of the Pantheon siblings for so long and seen just how powerful and nigh-omnipotent each of them is, it gives us a fair gauge for how knock-your-socks-off unstoppable this Dragon dude must be.  Okay, it's a bit of an old strategy, having the current villains acting scared of a newer villain to make the newer villain look more intimidating, but it's all in the execution and they've been working toward this reveal for a while.

It also gives you hope that maybe we'll be seeing the Shredder again in some form or another.  Kitsune had been prepping him for centuries to become the vessel for the Dragon, and while she laments his loss in this issue, she then proceeds to act like her plan is still in motion even with him gone.  And, I mean, it's not like we don't know where the Shredder is right now.  He's hanging out with that little demon kid and killing himself over and over again.

So this was a rewarding issue.  It feels a little overdue, but what we got was good.  We got DIRECTION.  That may sound like a fundamental, and it IS, but it's something these villains have been without for almost half a decade.  But it also shows us how interesting these Pantheon characters are.  The Turtles don't show up until the last page of this issue and you don't even miss them.