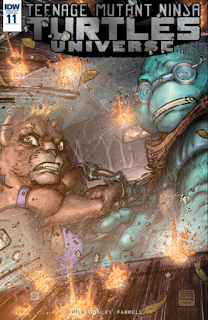 Driving through the New Jersey Pine Barrens, Sally and Ray are in search of the so-called Jersey Devil.  There has recently been a rash of new sightings and Ray thinks it could be another potential recruit for the Mutanimals.  Along the way, they remind each other of their origins as Null experiments: How Sally was trained to be the perfect pilot and driver, while Ray was trained to be the perfect soldier.

Elsewhere, four cyborg agents working for Null (Fist, Waster, Deadaim and Lynch) are also in search of the Jersey Devil, who escaped Null custody.  Via mutagen packs on their backs, they transform into werewolves and begin the hunt. 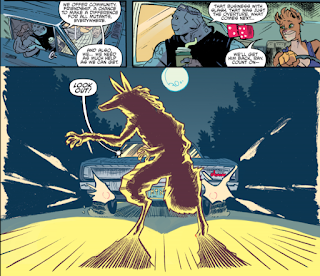 Taking her eyes off the road for a second, Sally nearly runs over a jackal-mutant.  He dodges the car with his speed and reflexes, and after Sally stops, he introduces himself to them as Dreadmon.  Apparently, he was a child soldier in the Congo when a Null scientist offered to pay him in exchange for undergoing some tests.  He was transformed into a mutant and escaped to the US.

Ray is disappointed and, citing Hob's "no humans-turned-mutants" rule, tells Sally they need to leave.  Suddenly, the werewolves attack.  They need to bring Dreadmon in alive, but Ray and Sally are expendable (albeit worth a bonus if taken alive as well).  Ray is tranquilized and captured, but Sally and Dreadmon escape in the car. 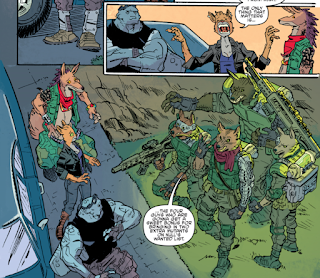 Recalling how Ray was her only friend when they were both captives of the Null Corporation, Sally insists they have to save him.  The wolves catch up in their military vehicle and Deadaim blows the tires on Sally's car with his sniper rifle.  They catch Dreadmon and Sally, but Fist offers Dreadmon a choice.  He can be "chattel" like all the other experiment mutants (such as Sally and Ray), or he can be retrofitted with cybernetics and controlled mutagen packs like the werewolves, allowing him to be human again (more or less).  Dreadmon considers the offer, but as a show of good faith, Fist tells Dreadmon to shoot Sally.  Dreadmon has a strict "no guns" policy and refuses.

Coming to, Ray commandeers the military vehicle and plows through the wolves.  Sally and Dreadmon get inside and proceed to make a getaway.  The wolves cut them off and Sally proceeds to shoot Fist in the face (though his cybernetics keep him from dying).  Recovering, Fist vows that they'll meet again. 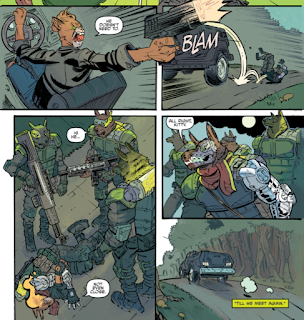 Later, Sally and Ray drop Dreadmon off.  They extend him an offer to join the Mutanimals regardless of his human origins, but Dreadmon declines.  He's tired of being a soldier and he's tired of living in cages, wanting only to run free and live life his own way.  As Sally and Ray drive off, they wonder how many other famous cryptids are really just mutants they might recruit.

*Old Hob's "no humans-turned-mutants" rule was established in TMNT (IDW) #39.

*The werewolf team goes without a proper name in the issue, but their individual identities are taken from the Archie TMNT Adventures villains the Gang of Four: Fist, Lynch, Waster and Dead-Eye (renamed "Deadaim" for this comic).  They first appeared in TMNT Adventures #48.

*There was no back-up in this issue; the extra 4 pages were given to the main story.

While this issue was a bit by-the-numbers, it certainly wasn't bad.  And you know what really helped it?  Having four extra pages to tell the story with.  If this series is going to cost $5 a pop, I'd rather the extra real estate used to justify the price-point be given to the main story.  The back-ups have been the weakest part of TMNT Universe, which has otherwise been killing it with its storytelling.  Best to cut the back-ups loose and put those bonus pages where they can do the most good.

This one-shot adventure reprises the threat of Null, who has just sort of been biding her time as a background villain for a while.  She was introduced in the Mutanimals miniseries with much pomp and circumstance, but I don't think she's done anything of note since then beyond working in the shadows during "The War to Come".  With all the Bishop and Pantheon shit going on, its easy to lose track of some of these other villain factions.

As with Zodi in "The War to Come", we're introduced to more of Null's mutant soldiers.  And I suppose that's the gimmick that's going to make Null stand out from the other bad guys.  Baxter's got robots, the Pantheon's got magic, Bishop's got army guys, but Null's got a seemingly inexhaustible reservoir of animal-people with guns and shit.  Not a bad gimmick and it serves to make her the more obvious direct antagonist to the Mutanimals (both utilize militarized mutants, but one side is a little less evil than the other).

The werewolves get their names from Archie's Gang of Four, the mercenaries most famous for killing the Mutanimals, but otherwise they share no similarities.  And you know what?  That's ok.  The Gang of Four in the Archie comics were almost embarrassing in their '90s-ness, with especially bad designs and especially stupid names.  Nothing to be done about the names, but making them cyborgs who can transform into wolves is a step in the right direction.  I'm wondering if wolves is ALL they can turn into, though?  It might be cool if they could toggle between different animals, depending on the needs of the mission, only requiring differently formulated mutagen to be given to them on assignment.

Or maybe they'll just be a bunch of werewolves, I dunno.  Though as little as they resemble the original Gang of Four, introducing them into a story that involves the Mutanimals is a tad ominous.  Again, they were the ones who killed them in the Archie comics, after all.  They could wind up being excellent recurring adversaries in the IDW-verse if used well.

Also, Dreadmon was in this comic.  In fact, this comic was supposed to be about Dreadmon.  But man, he just sort of drifts into the wallpaper.  His speed and reflexes made it into the transition (though he's less "Sonic the Hedgehog" about it), but he lost a lot of his personality.  Actually, looking back, I'm not so sure Archie-Dreadmon HAD any personality.  He had an accent, but not a personality.

Writer Rich Douek tries to include the Jamaican accent, albeit downplayed so he doesn't sound like a rum commercial (he also throws in a note about Dreadmon's father being Jamaican even though they lived in the Congo as a means to facilitate the accent).  It was a nice effort, but it only really served to make me realize how boring Dreadmon is when he isn't going on about limbo sticks and steel drums.

You know what this story DID make me want to see?  A series where Ray and Sally travel around the country, hunting down cryptids to see if they're mutants worthy of joining the Mutanimals.  That could be a whole lot of fun (and they sorta joke about it at the end).

On art duty is Aaron Conley.  Previously, he did a couple pages in Bebop & Rocksteady Destroy Everything #4 and maybe a variant cover or two. While I think he could use better line weight between background details and character forms (everyone in the foreground kinda gets lost in the trees in the background and I imagine if the colorist hadn't been so good this comic would be very hard to read), he's great at expressions and layouts.  He shifts back and forth on Dreadmon and the wolves, as they go from looking docile and "cute" to snarling and monstrous.  He implements cartoony expressions sparingly and he doesn't over-exaggerate them.  So when Sally makes a surprised or disappointed look, it has more humorous emphasis.

Though I do wonder how exactly the cybernetics work on the wolves.  When Fist gets half-his face blown off, he's in wolf-mode and has a robotic wolf-skull.  So then how does his skull change shape when he goes back to being human?  It's like this is a comic book or something, jeez.

Anyhow, while this one-shot didn't knock my socks off and the star character being introduced was the least interesting thing about it, it offers a lot of potential in the ideas and threads it establishes or revitalizes.  I DO want to see more of Null antagonizing the Mutanimals and I definitely want to see more Mutanimal recruitment drives.  Though between this and Hob's failed attempt to get Leatherhead on their side, they aren't exactly on a winning streak.