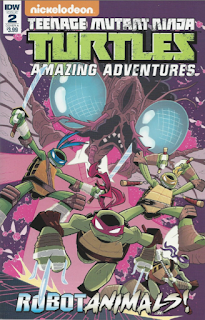 In the warehouse, the Turtles stop playing dead and take the Robotanimals by surprise.  Leo slices off a piece of Slash's face and then they escape with a smokebomb.  Baxter is disappointed with the intelligence of his creations, but figures his Nanobot 2.0 upgrade will be an improvement. 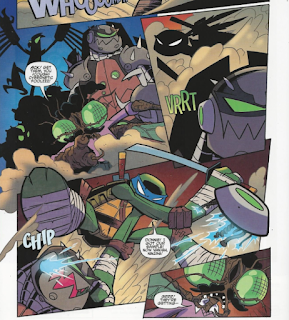 Down in Donnie's lab, after inspecting the piece of Slash that Leo chopped off, he determines that the Nanobots are only encasing the Mutanimals like a suit of armor.  However, they're also mutating and soon there won't be any way to reverse the process.  Donnie figures he can work on an antidote and begins typing up the code while his brothers (mainly Raph) urge him to work faster.  April and Casey then show up (at Mikey's beckoning) and they join in on telling Donnie to hurry up.  A fight breaks out with the frustrated Donnie, which Splinter quickly resolves.  Raph apologizes and Donnie finishes the antidote, though he can only synthesize enough for one shot. 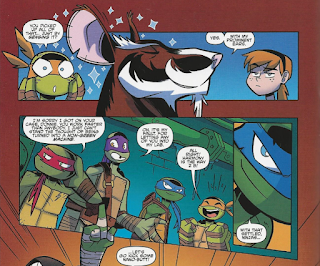 In the Party Wagon, the Turtles follow the signal of the Nanobots in hopes of finding the Robotanimals.  Instead, they find the roboticized Antrax and Scumbug, who have captured Fishface and Rahzar.  They engage the insects in battle, but they release more Nanobots in the skirmish.  Casey is unharmed, but April is infected due to her part-mutant DNA and goes catatonic. 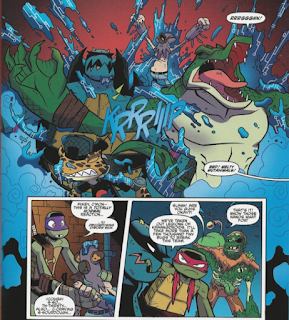 Baxter then arrives with the Robotanimals and takes an interest in April, realizing that she's the key to perfecting his robot-mutant process.  The Robotanimals attack, but Casey manages to detonate the antidote bomb, restoring the Mutanimals to their former selves.  In the confusion, Baxter, Antrax and Scumbug escape with Fishface, Rahzar and April.  The Turtles and the Mutanimals vow to team up, defeat Baxter and rescue April.

Man, I have nothing to say about this issue.  It was light, it was enjoyable, it was... a comic.  I dug it, but it's going in the long box and I don't know if I'll ever think about it again.

I'll have more to add when the next and last issue comes out, since it's supposed to be the final comic from IDW based on the Nickelodeon TMNT cartoon.  I'll probably just end up repeating myself from the past, but whatever.  At least I'll have a better chance of filling out a review than I do now.