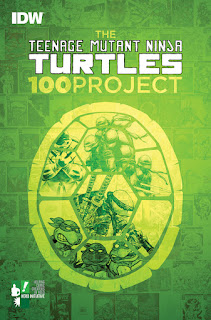 The TMNT: 100 Project contains over 100 pieces of original art done on blank sketch covers for TMNT (IDW) #50.  Artists who appear in this book:

*As with Hero Comics 2012 #1, this special art book was released as a charity publication with all profits going to the Hero Initiative.

*Although Nick Pitarra is listed in the index of artists, his work does not appear in the book.  Unfortunately, including him messes up the index and so half of the page numbers do not correspond to the correct artist.

I had a hell of a time finding this thing.  I had ordered it from my local comic shop and they put it on my list, but when the March release date came, they told me that it wasn't available through Diamond and that they'd have to special order it.  They tried special ordering it, but after a month they told me they'd have to back order it.  By around July they finally told me that they were never going to get it, so I should try elsewhere.  Of course, four months after release date, the thing was sold out everywhere.  Fuckin' awesome.

I lucked out, though.  I was browsing around a shop while stopped in Temple, Texas, and there it was, just chilling on the shelf with all the other trade paperbacks.  Got it for MSRP ($15).  Fuckin' awesome (not sarcastic, this time).

Now, I generally don't review art books here at TMNT Entity because, well, what can I write?  "Some of the art is good and some of it isn't."  Wow, I really plumbed the depths of my critical analysis skills for that nugget of wisdom.  But art is (mostly) subjective, so what I might think looks disappointing and what I might think looks amazing is entirely a matter of my perspective.  Chances are, I won't like what everybody else likes.  For example, there are people out there who like Erica Henderson.  I mean, I think there are.  She gets work, so there must be.  Right?

But I guess that's what's worth pointing out about this book.  There is a LOT of art in this thing and there is a WIDE variety of styles.  You WILL find something you like in here.  In fact, given the quantity of content, you're gonna find lots of stuff you like in here.

In addition to the wide range of aesthetic styles, you'll also encounter a wide range of... effort.  There are artists who devoted countless hours to their charity cover, really bringing their A-game and giving it their all... 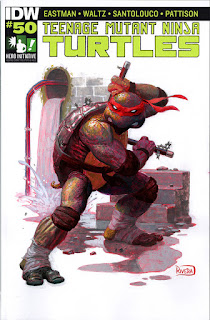 And then there are artists who just shat a doodle out in 3 minutes and called it a night. 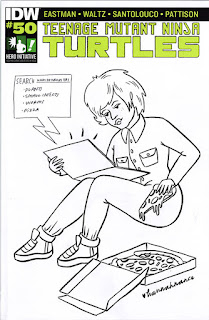 But hey.  Some people like doodles.  More power to ya, I suppose.

You'll see a ton of recognizable names in here, featuring TMNT artists from multiple generations.  There are Mirage dudes like Lawson and Berger, and then there are IDW dudes like Schoening and Dialynas.  And this kickass piece from Duncan: 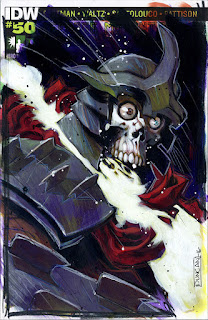 There's a whole lot of representation in here, including plenty of artists I've never seen touch the Turtles before.  Check out this gorgeous cover from Migliari: 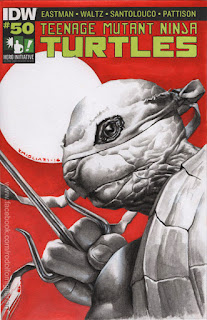 Like I said, you can definitely tell who gave a shit and who didn't in this collection.  Because damn.

Regarding subject matter, the majority of the book features drawings of the Turtles, as expected, though there are some dark horse interpretations of them.  I was surprised to find several depictions of the TMNT from the reviled live-action Michael Bay films.  They're nice pieces to be sure, but the Turtles are still ugly.

In terms of characters, you have mostly the usual suspects: The Turtles, April, Krang, Shredder, Bebop, Rocksteady, etc.  Even a couple of Leatherheads.  But then you'll turn the page and get hit with a wild card.  Dr. Dome? 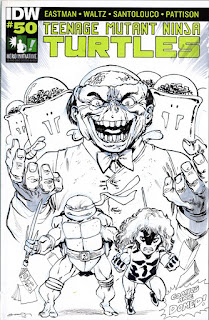 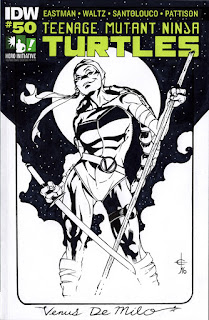 So that's what I mean when I say there's so much variety in here.  Variety of styles, variety of interpretations, variety of characters... It's an art book that celebrates the entire TMNT franchise in all its incarnations, even the unpopular ones like Next Mutation or the Michael Bay flicks.  It's sincere and I appreciate that.

All-in-all, it actually reminds me of Udon's various Capcom tribute art books, albeit in soft cover.  It follows the same formula and there's a certain joy in seeing (almost) every aspect of the franchise receive a spotlight in so many different styles.  While I know IDW did this for a special event, I'd love to see them do more periodically.  And if they do, I'll be sure to buy one from a shop that can actually order the damn thing.