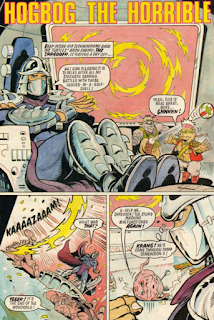 In the Technodrome, Shredder is enjoying his day off when Krang comes through the portal from Dimension X.  Still angry that Shredder won't build him a body, and displeased with all of his failings, Krang fires Shredder and introduces him to his replacement: Hogbog, the Totally Horrible.  Shredder backs away in awe of the giant, three-armed, fire-breathing monster, but orders Bebop and Rocksteady and spy on Krang and figure out when he plans to unleash it on the city.  The mutants do, and when Shredder gets the time and location, he calls the Happy Hour News and reports it in as a means to sabotage Krang and get his job back. 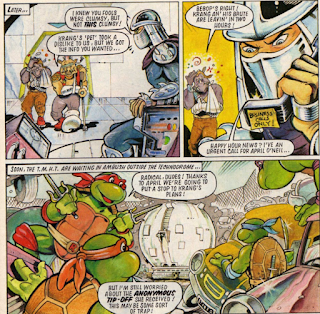 Thanks to April, the Turtles arrive at a junkyard the same time as the Technodrome.  They get the drop on Krang and knock him off his tripod, but Hogbog comes storming out and attacks them.  The creature corners them, but April comes speeding in on the Channel 6 news van and crashes it into the monster.  Dazed, Hogbog goes wandering off into the city.  The Turtles leave to catch Hogbog while April stays behind to deal with Krang.  Knowing she can't fight him, she calls in her camera crew who broadcast his bodiless appearance all over television.  Humiliated, Krang squirms away in tears.

Meanwhile, the Turtles go after Hogbog in the Turtle Blimp.  They find him scaling a skyscraper and Leonardo, Michelangelo and Raphael grapple down to fight him.  With Hogbog distracted, Donatello smacks him in the back with the Blimp's glider, knocking him over the edge of the skyscraper.  The monster crashes into the ground and is driven deep into the earth by the impact. 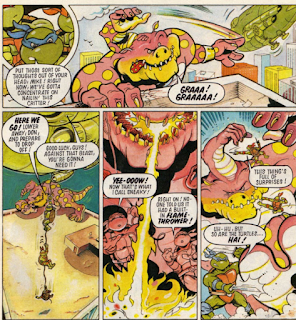 Back in the Technodrome, Shredder is certain he's got his old job back now that Hogbog has been defeated.  But Krang returns from a second trip to Dimension X with Shredder's newest replacement: Hogbog's mate.  Knowing Shredder sabotaged his last scheme, Krang sics her on him to get revenge.

*This story was originally published alongside "One of our Turtles is Missing!"

*When Hogbog crashes through the ground, the Turtles joke that he might make an appearance in Neighbours.  I had to Wikipedia this shit, but apparently Neighbours is an Australian soap opera that's very popular in the UK.

Wait, Shredder hasn't built Krang his robot body yet?  So does that mean this story takes place somewhere in the middle of the Archie TMNT Adventures miniseries?  Or, more likely, the Fleetway comics ascribe to no coherent continuity, not even that of the Archie comics they were published alongside of.

Other weird season 1 relics abound.  This issue features Krang firing the Shredder from his employ (a plot the cartoon would later try its hand at in the episode "Beware the Lotus").  It's a reminder that although Shredder and Krang were more often depicted as partners in later seasons, their original dynamic in the series was as employer and mercenary.

There are yet more season 1 artifacts in the story, like Krang being embarrassed to be seen without a body and also calling the Shredder "Saki" as a means to disrespect him (something he stopped doing by the second season).  It seems that the people who wrote the Fleetway-original comics never read past the initial Archie 3-issue miniseries (that adapted the first season of the cartoon), because all the character dynamics and even designs are mined exclusively from those stories.

Aside from some good (but uncredited) artwork, "Hogbog the Horrible" is far more milquetoast than the other comic published in this issue of Hero Turtles.  It has a fun focus on the villains, but nothing much beyond that save for a generic monster and a tired King Kong parody.