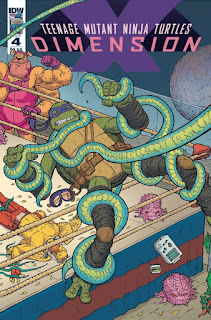 The Turtles arrive on Palmadise, a world of gambling, drinking, crime and debauchery, in search of the next witness: Ace.  The alien duck is wanted by more than just the Turtles, as a crime boss named Papa Chum has put a bounty out on him for stealing and destroying a weapons cache of his.  As the Turtles search for Ace, Michelangelo buys a lotto ticket. 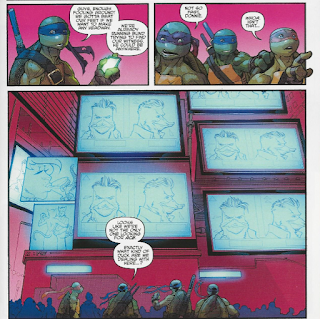 Meanwhile, Ace is on the run from a bounty hunter named Thurk.  Thurk corners him and is about to pull the trigger when the Turtles show up and take her down.  Thinking them to be incompetent rival bounty hunters, Ace spreads his wings and tries to fly away.  The Turtles manage to reel him back in by calling out that they need his help to stop Krang. 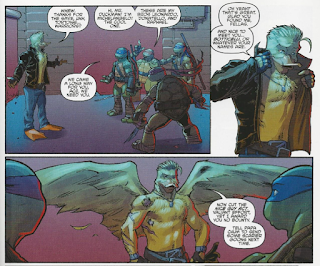 Ace takes the Turtles back to his hideout and tells his story.  As it turns out, Ace was once allied with the Neutrinos and flew in their air force on missions against Krang.  Unfortunately, he and the rest of Infantry X-5 were shot down and forced to surrender.  Krang executed all of X-5 while they were unarmed and only Ace made it out alive (by abandoning his comrades in the chaos).  Ace agrees to go with the Turtles to testify against Krang and find justice for his comrades.

They head to a subway, but as soon as the train starts, they're attacked by Hakk-R.  Ace flies the coop, leaving the Turtles behind, but they're inadvertently saved by a pair of bounty hunters who try to stop Hakk-R from collecting their reward.  The Turtles eventually catch up with Ace on the surface, realizing that he's just as cowardly now as he was in the past.  Suddenly, it is announced that Mikey won the Palmadise lottery with the ticket he bought earlier, and in all the commotion, Ace steals the Hot Rod and flies away. 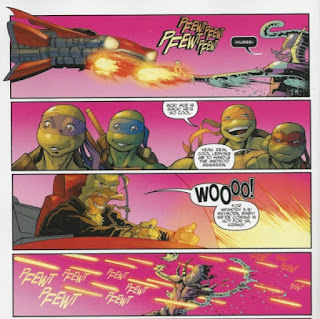 Hakk-R then catches up and attacks the Turtles (causing Mikey to lose his winnings), but before he can take them down, Ace returns.  He shoots Hakk-R down with the Hot Rod's weapons and then collects the Turtles so they can escape.  In the safety of outer space, Raphael has a few choice words for Ace, but Mikey holds him back.  Leonardo tells him that there are no hard feelings, as Ace eventually made the right choice to not only come back for them, but to stand up against Krang.

*The planet Palmadise originates from Mighty Mutanimals #9, where it was revealed to be the homeworld of that universe's Slash.

*This issue was originally published with 3 variant covers: Cover A by Nick Pitarra and Chris Chuckry, Cover B by Chris Johnson and Mark Englert, and Incentive Cover by Kevin Eastman and Tomi Varga.

If you read my review from last week, then you know that I was genuinely concerned that Ace Duck wasn't going to be in this miniseries; that his cover appearance was just an Easter egg.  As you can imagine, I am beyond relieved and also elated.  But why?  WHY do I think Ace Duck is so cool?  He's ACE DUCK, for crying out loud.

You know what?  There's no better time to do this, so let's take a historical look back at Ace Duck and his many escapades.

This is going to be short.

Ace Duck originated as a concept by Peter Laird, pitched to Playmates in 1988.  It was a duck named "Duck" that was also a pilot. 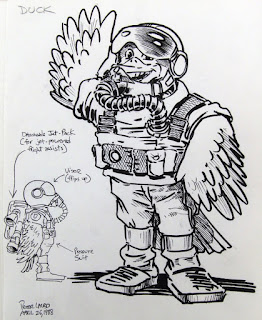 Designer Errol McCarthy then reworked that idea of a pilot duck, but ditched the high altitude flight suit in favor of a bomber jacket and, apparently, a crippling nicotine addiction. 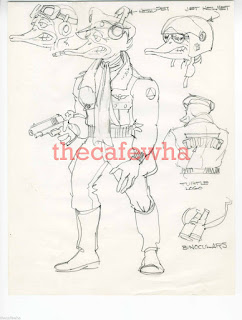 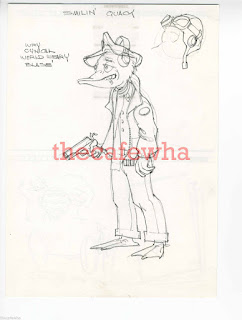 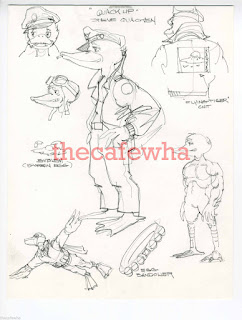 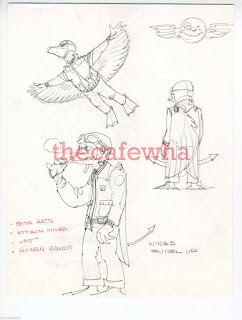 This is the version of Ace that Playmates ultimately went with (minus the cig), and in 1989, we got his well-remembered action figure: 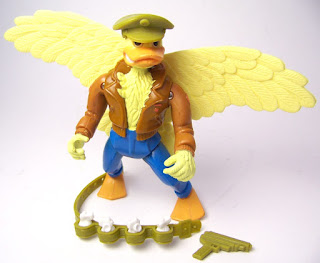 He made a 2-second cameo in the Fred Wolf cartoon, in the episode "Attack of the Big MACC", where he was depicted as a fictional TV show character and not "real". 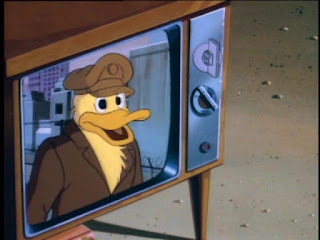 But at least that version LOOKED like his toy.  Ace would proceed to make his most substantial fictional appearance in Archie's TMNT comic, beginning in TMNT Adventures #7.  In those stories, he was depicted as a grotesquely muscular alien pro wrestler.

And then it was jack shit after that for, like, 20 years.  He finally made his grand comeback in the 2012 Nickelodeon TMNT cartoon as a brief gag in the episode "The Lonely Mutation of Baxter Stockman" as a proposed new mutant henchman.  Shredder was so outraged by this proposition that he mutated Baxter into a hideous fly-man on the spot. 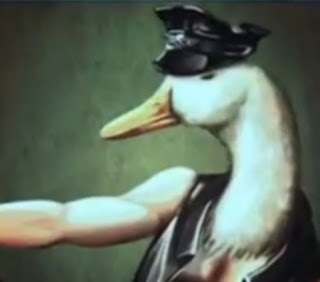 And now you know the complete history of Ace Duck.  But you still don't know why I think he's so cool.

Because I had the toy when I was 5.  There.  Mystery solved.

Okay, to elaborate, since a lot of characters who got action figures in the old TMNT toyline never made any media appearances, it was up to US, the wee childrens, to use our imaginations to craft histories and personalities for these bizarre lumps of plastic.  It's why you will find people out there with off-puttingly strong attachments to the most insignificant of characters.  You ever met someone who likes Doctor El just a little too much?  It's probably because they only had two Ninja Turtles toys as a kid and that was one of them.

The toy characters were pretty much blank slates for our imaginations, and even with the bio on the back of the box, the work was up to us.  Our only REAL pointers were the design of the toy and the accessories that came with it.  We had a sneering duck in a leather jacket with a handgun and a bandoleer of grenades whom the Turtles had to pay to hang out with them.  The default personality projected onto Ace Duck was "this guy's pretty cool."

Ferrier gives Ace the personality I always thought he had as an elementary schooler but was never substantiated in any media appearance.  This issue was strangely gratifying on that account.  I was right all along!  But there's also a selfish yellow streak to the character, giving him a roguish quality that makes him more than just the Fonz with a bill.  It leads to a bit of predictable storytelling (Ace cutting out during the climax only to man up, return, and save the day), but Ferrier peps the script up with some fun running gags, like Mikey getting into gambling.

In fact, there's sort of been an ongoing shtick throughout this miniseries between Raph and Mikey.  Mikey has been on something of a stimulation overload visiting all these alien planets and getting caught up in all the antics (be it wrestling or gambling).  Raph has been a sort of wet blanket throughout Dimension X, harrumphing through every encounter, and in this story he wants to give up on Ace as soon as he tries to fly off.  He is 110% DONE with this adventure and just wants to go home.

Leo and Don are also present, as they most frequently are in these matters.  They will certainly receive a Good Attendance Award at the end of the school year, yessir.

Johnson's art is very detailed and Palmadise looks crowded and bustling throughout the issue.  He rarely phones in the crowd shots and you can spend some extra time on each panel, singling out all the weird aliens.  While they are a bit generic (couldn't find any Easter eggs among them), it's still an appreciated effort on his part and he does make Palmadise look vibrant and alive.

Englert's colors have a nice glow effect that fits the neon "Vegas strip" setting.  My only grievance, and it might just be on my copy, is that Raph's bandana looks more purple than red throughout the issue.  It's likely a natural effect of the mainly blue "lighting" combining with the red bandana to make it look purple, but I think Englert would have been best to fudge reality a bit and kept it red so as not to give us two Turtles with purple bandanas.

While I still think issue #3 is the issue to beat, this one was right up my alley.  Your enjoyment will depend entirely on if you give a shit about Ace Duck or not, but I think even if you don't you'll find some fun.  Hakk-R is really turning into a stooge at this point in the mini and I'm curious how he will be treated when the ongoing series resumes with the Trial of Krang arc.  Will he be built back up to nigh-unbeatable or will his decay in ability be remembered?  I guess we'll have to wait and see.