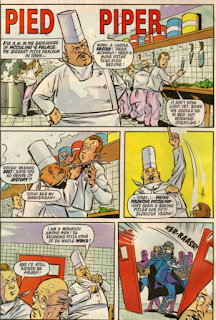 At the popular pizzeria Piccolino's Palace, head chef Pietro Pauncho Piccolino is working his cooks through the pre-dawn hours, making pizzas for his restaurant's 50th anniversary celebration.  The cooks are complaining about lack of sleep when the Shredder and his Foot Soldiers burst in.  The Shredder offers to help them get some sleep by beating the shit out of everyone.  He then reports back to Krang that stage one of their plan is complete. 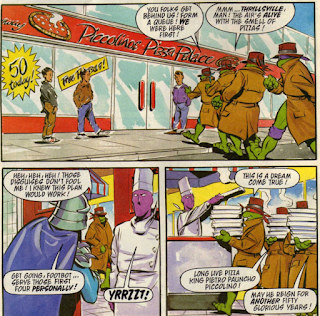 Later that morning, down in the lair, the Turtles catch April's news broadcast reporting on Piccolino's anniversary... and the FREE pizzas he'll be giving away to celebrate.  The Turtles put on their trench coats and head to the restaurant for their free pies, where several Foot Soldiers in chef costumes hook them up.  The Turtles return to the lair and scarf down the piles of pizza, only to quickly fall asleep as the food had been drugged.

Finding his pupils unconscious, Splinter investigates, but is immediately hypnotized by strange music.  He wanders out of the lair and through the sewers along with all the others rats who hear the song.  Spying, Bebop and Rocksteady report back to Krang that stage two is a success.  Evidently, Krang's master plan involved dressing the Shredder up as the Pied Piper of Hamlin and having him play a flute with a special frequency that entrances rats... Splinter included!  With the Turtles unconscious thanks to the drugged pizzas, there's nothing stopping the Shredder from leading Splinter to the incomplete Westside Bay Bridge and sending him plummeting off of it. 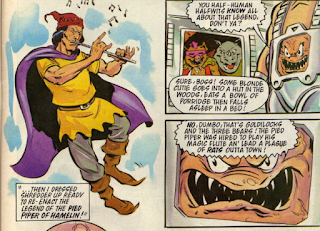 Residents of the city notice the rats all congregating at the bridge and call in to the news networks.  Burne gets wind of this and assigns April to investigate at the bridge.  As soon as she gets there, she recognizes the Shredder and sees Splinter under his control.  April races to the lair and uses a flood of water to wake the Turtles.  Once they're caught up, the Turtles mobilize.

The Turtles arrive at the bridge, where the Shredder has gone airborne in a helicopter, hovering over the bay.  Splinter and the rats continue moving toward the source of the music, drawing closer to the end of the bridge.  Knowing they can't stop Splinter, the Turtles form a human pyramid and get high enough to reach the helicopter.  Donatello snatches the flute from Shredder, ending the music and snapping Splinter back to his senses. 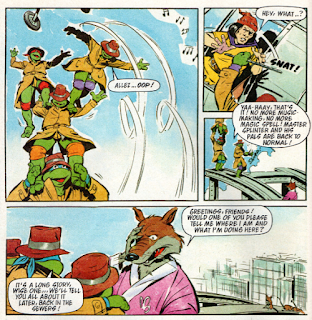 Down in the lair, the Turtles sullenly burn the pizzas they bought, knowing that they're all drugged.  April cheers them up by promising to buy them all dinner at Piccolino's.

*This story was published alongside "Turtles of Terror".

Shredder had to deal with a lot of indignities during the Fred Wolf and Archie era.  There was that time he got transformed into a baby, that time he got mutated into a fly, that time Krang fired him like he was a secretary that made too many typos... But this seems like one of his worst moments.

Krang's scheme isn't without merit.  In fact, it's actually pretty brutal.  The mission is strictly to kill Splinter.  No taking over the world or even defeating the Turtles.  They just flat out want to kill Splinter.  It comes pretty close to working, too, and that's fine.

But what I don't get?  Why did Shredder have to wear the Pied Piper costume.  How did the costume affect the scheme?  He could've just played the flute while wearing his usual outfit; that silly getup didn't enhance anything.  You know what?  I bet Krang was just fucking with him.

What's really funny is how disguises both work and don't work throughout this issue, depending on convenience.  When the Turtles show up at the pizzeria in their trenchcoats and fedoras, the Shredder snickers that he can see through their disguises.  He then puts chef hats on his Foot Soldiers and has them deliver the pizzas to the Turtles, who don't recognize the Foot Soldiers at all.  And later, when April glimpses the "Pied Piper", she immediately recognizes him as the Shredder.  Has April ever actually seen the Shredder without his mask on?

This whole story is just ridiculous, but man, I kinda love it.  And you know what else I love?  The violence.  We like to laugh at UK Hero Turtles stuff, where they couldn't use the word "ninja" because "it's too violent" and Michelangelo couldn't have his nunchakus because "they're too violent".  But I swear, these UK comics are WAY more violent than the American ones even with those handicaps.  Just LOOK at these blows: 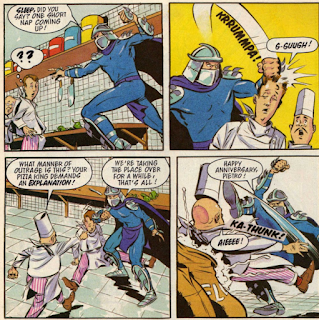 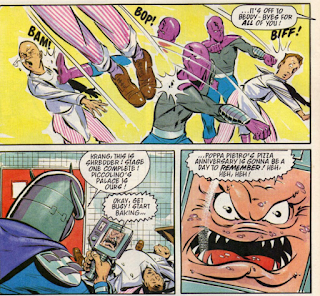 The Shredder and the Foot Soldiers are absolutely fuckin' WRECKING those poor saps.

And as one final note, it's weird that this comic didn't feature the Rat King.  Like, this was his whole shtick in the Fred Wolf cartoon and Shredder straight up swipes it in this issue.  Rat King had better call his lawyers.