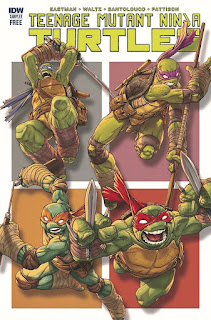 *A summary of the IDW TMNT comic's major narratives up to the "Trial of Krang" storyline.  Art is recycled and rearranged from existing issues with new narrative captions overlaid.

*This sampler comic was given away free at select comic book shops in the United States during their TMNT Day 2017 promotion.

*IDW has made a .pdf version of the sampler available online HERE.

This is going to be a sort of "non-review" because I don't actually own this thing.  And I don't think a lot of people do, either.  The TMNT Day 2017 promotion wasn't very well... promoted, and so only a handful of comic shops in the US actually knew anything was going on.  I went over to my local shop on my lunch break today and got nothing but blank stares when I asked about it.  They hadn't received any notifications about the event from IDW, nor any solicitations for the sampler books to give away.  My shop owner's exact words after I explained what the fuck TMNT Day 2017 was to him were, "Well, they sure botched that promotion."

But hey, if you got one of these, cool!  And if you're like me and didn't, I don't mean to sound like sour grapes or anything, but it isn't that big a deal.  This wasn't like one of the Free Comic Book Day specials where they mix reprints with new content; this was 100% reprints.  So unless you're an absolute completionist, don't beat yourself up over missing it.

Chances are, this is the first you're even hearing about the thing, anyway.  Happy TMNT Day, everybody!

EDIT: Oh hey, look at that.  IDW put a .pdf of the thing up on their website.  That was courteous of them!  Guess I'd better turn this non-review into a review-review.

At 18 pages, it's almost a full-length comic, but with all the narrative text summarizing the series highlights, it reads twice as long as a full-length comic.  You might get more mileage out of this free sampler than from a $3.99 issue of the main series!

Whoever did the layout isn't credited, but they did a nice job taking all the panels from misc. issues and tessellating them in a coherent fashion.  I wonder if it's the same person who does that for the Free Comic Book Day special recap sections?  Whoever they are, they're good at it.

Okay, so there is ONE part that looks a little cheesy... 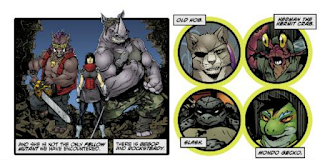 It's like one of those title cards for an animated short from the 1930s, where they put the character's head in a circle above their name.  "Leon Schlesinger Presents... A Herman the Hermit Crab Cartoon!"

There are two bonus pages at the end that kinda-sorta push this thing into the 20-page standard comic length.  It's an update of the IDW TMNT trade paperback reading order.  The thing is getting a little cluttered with their current formatting, but if you eschew MY humble attempts to assemble such a resource, then it still comes in pretty handy.

Weirdest thing about it is that it claims that the Batman/TMNT miniseries is part of the series canon.  I... wouldn't put a whole lot of stock in that, personally.  Ignoring the statements from the editor that the miniseries is non-canon, the IDW trade paperback reading order places it after TMNT (IDW) #50... when the Shredder is supposed to be dead.  Yeah.  They likely just wanted to advertise the thing, and who can blame them?  Canon or not, it's still really good.

Anyhow, this thing was "neat" but you've got to be a pretty hardcore collector to go out of your way to get one, assuming your shop didn't participate in TMNT Day (and they probably didn't).  Shit, man, even I'm not that hardcore of a collector and I own a copy of TMNT Meet the Conservation Corps.