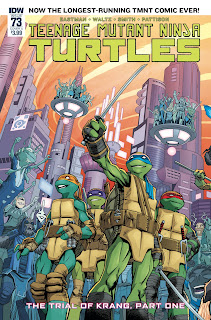 "The Trial of Krang, Part One"

Planet Neutrino, Smada City, the Kah Lil High Security Prison.  General Krang is in his cell whining to his attorney that the entire trial he's about to be subjected to is a farce, insisting he only did what he did for the survival of the Utrom race.  His appointed defender has little hope in winning the case, but after he leaves, Krang calls his associate to come out.  Hakk-R slithers out of an air vent and Krang slips him a device.  He tells him to use it in conjunction with the witness IDs he stole from the Fugitoid to make sure he wins his trial. 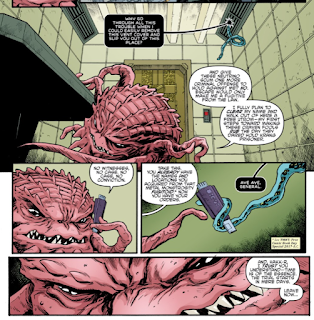 Earth, the lair.  The Turtles and the Fugitoid are met by Commander Dask who teleports them back to Smada City on Planet Neutrino so they can help with the case against Krang.  Upon arrival, they're met by Zak, Kala and... Leatherhead?  Evidently, Leatherhead was "subpoenaed" to act as a witness in Krang's trial and will gladly testify against his former captor.  The Turtles are then brought to a ceremony where King Zenter, Queen Gizzla and Princess Trib present them with medals recognizing their participation in the Krang War. 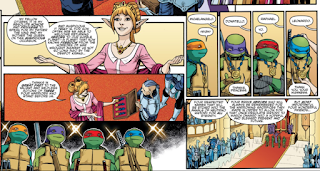 Later, the Turtles and Leatherhead are brought to the war room for a briefing with King Zenter.  Zenter explains that since Krang was captured, Maligna and her Malignoid forces have tried to fill his power vacuum.  Unfortunately, he cannot focus on stopping them until the trial is concluded and Krang is dealt with for good.  Appa of the prosecution team then enters and unloads some bad news.  When Utrominon was destroyed, most of the evidence of Krang's evildoing was lost with it.  The five witnesses the Fugitoid had mentioned are more vital than ever in sealing the case against Krang. 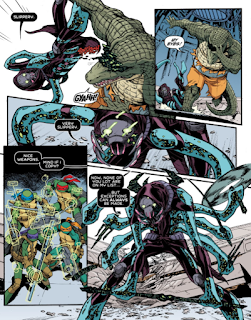 Suddenly, a tentacle slithers out from under a table and injects Appa with a poison that kills him on the spot.  The assassin reveals himself to be Hakk-R, and after a brief skirmish with the Turtles, Leatherhead and the Neutrino Commandos, he teleports away.  The Fugitoid, having had the most contact with Krang, is then forced to fill Appa's shoes on the prosecution team.  The Turtles, Zak and Kala then leave aboard a Neutrino Starmobile to gather up the witnesses before Hakk-R can get them (while Dask stays behind to watch Leatherhead).

*Hakk-R stole the witness data from the Fugitoid in the 2017 Free Comic Book Day special TMNT: Prelude to Dimension X, which occurs just before this issue.

*TMNT: Dimension X #1 and the rest of that miniseries take place between this and next issue.

*General Krang was captured by the Neutrinos in TMNT (IDW) #44.

*The last days of Utrominon were seen in TMNT: Utrom Empire #3.

*Hate to be a Debbie Downer, but the cover blurb promoting this issue as "The longest-running TMNT comic ever" is a bit of a premature celebration.  While the IDW run has now eclipsed the Archie run, which ended at issue 72, the Fleetway comic actually ran for 75 numbered issues and 84 total issues (the numbering was dropped but the series continued without it for some reason).

*That said, it IS the longest-running TMNT comic to actually use the word "Ninja" in the title (since the Fleetway comic was technically Teenage Mutant HERO Turtles), so I guess they're right in that regard.

You know what I rarely compliment IDW's TMNT book on?  Having enough dialogue and text to make me feel like I'm getting my money's worth.  It isn't overburdened with purple prose, like a Chris Claremont book, but there's enough of it in these comics to keep me from breezing through the things in 5 minutes and wondering where my $3.99 went.  And the dialogue is colorful enough that it gives the characters personality and charm, too.

Hey, it may not sound like a big deal, but with comics costing as much as they do, I value a book that actually expects me to READ it and spend some time on it.

Anyhow, "The Trial of Krang" is underway and it feels like forever since we last heard from him (just over 2 years).  While I didn't miss him while he was gone so much, mostly because his arc was very nicely sewn up during "Attack on Technodrome", I am happy to be catching up with him again after an extended break.  The actual "trial" aspect of this storyline presents an interesting followup; in hero vs. villain comics, you usually expect the bad guys to be plopped in prison once they're caught and that's the end of that.  But this storyline reminds us that due process is a thing (even in Dimension X) and Krang gets his day in court.  He's not done yet.

While Krang hasn't been heard from in two years, the Neutrino characters haven't been seen in FOUR years.  I had completely forgotten about Mike's crush on Trib.  Waltz stirs the embers of that forgotten romance a bit, with Trib giving Mikey a special welcome after the ceremony, intimating a mutual attraction.  I wouldn't get too attached, though; Mikey's gonna have to go back to Earth when this storyline is over, after all.

The Neutrino Commandos feel a bit more distinguished in character than I recall them.  Dask is the serious-minded leader, Zak is the catchphrase-spewing cool guy (who acts most like the Fred Wolf era Neutrinos), and Kala is... the girl.  Okay, so she still needs some work, but the characters do pop a bit more this time around than they did four years ago.  Chalk that up to the writers having a near half-decade of extra experience under their belts now as opposed to then.

This entire "Trial of Krang" is perhaps a bit fragmented in delivery.  I hope you got that Free Comic Book Day special back in May, because it's what sets everything up.  And before you read Parts 2 and 3, you've got to check out the whole 5-part Dimension X miniseries (which looks to be good).  I can see the convoluted release potentially scaring off some new readers, but the bright side is that those awesome hard cover IDW Collections will print everything in proper reading order, so it won't be an issue in a year or two.